SG is a 55-year-old postmenopausal woman who initially came to my office in May 2011 for consultation about a severely itchy rash. The itching had started on the hands and had progressed during the month to the forearms, flexure surfaces of the elbow (antecubital folds), and chest. She was experiencing painful cracking and bleeding on her knuckles and arms. The itching worsened at night, which kept her from getting adequate sleep. Life had been very stressful during the past 6 months with her work and family. SG was at her wit’s end and was ready to do anything to stop the itching. On examination, widespread eczematous papules and plaques were present bilaterally on the hands, forearms, antecubital folds, upper arms, and neck, with oozing of serous fluid from the most involved areas. In addition, lichenification and excoriations were present in the antecubital folds.

More than 28 years ago, SG had been diagnosed as having Crohn disease and was treated with the immunosuppressant agent azathioprine for 2 years. At the time of diagnosis, her main symptom was diarrhea, without any skin problems. She does not recall the areas of her gastrointestinal tract that were involved. After discontinuing the azathioprine, she followed a careful and restricted diet, without recurrent symptoms for several years. The diet consisted of whole foods, low-processed foods, and low sugar intake. In 1990, she underwent an appendectomy and not recall mention of active Crohn disease ileitis. In 2007, SG developed a small-bowel obstruction and underwent a laparotomy, with resection of a segment of small bowel. SG thinks there was a twisting of the colon, as opposed to scarring caused by Crohn disease. Since the surgery, she has been free of Crohn disease symptoms. SG had been taking levothyroxine sodium for hypothyroidism since 1997, until she took herself off of it 1 year ago.

In February 2011, she developed a very itchy rash on her hands and forearms. She saw a dermatologist, who diagnosed scabies, although no biopsy sample was obtained and no other family members had similar symptoms. She was prescribed permethrin. After starting the permethrin, SG experienced head-to-toe itching and discontinued its use. SG followed up with her dermatologist, who obtained a biopsy specimen from her arm. The biopsy specimen was negative for several items, including scabies and dermatitis herpetiformis. A specific diagnosis was not reached, so the rash was labeled dermatitis. At this time, the dermatologist prescribed topical corticosteroids. The corticosteroids helped a little, but SG was concerned about using them long term and on such a large area of her body, so she used them sparingly. She applied baby oil to her skin at night after taking a shower, which gave her short-term relief. In addition, she had tried an over-the-counter oral antihistamine, which provided some relief but caused severe fatigue. SG noted that when she touches wheat flour her hands get itchy. Other issues for SG included easy bruising, dry hair, and sensitivity to perfumes and strong odors.

Because SG was experiencing such severe symptoms, we approached treatment from many directions. It was important to search for the cause of the dermatitis, but it was just as important to treat the symptom of itching. She had not had any previous environmental or food allergy testing (IgE) or food sensitivity testing (IgG enzyme-linked immunosorbent assay) and was not eliminating any specific foods. Food panels (IgE and IgG enzyme-linked immunosorbent assay) were performed to determine if foods could be a causative or contributing factor to the dermatitis. In addition, a region-specific IgE environmental inhalant allergy panel was performed. A complete blood cell count, a comprehensive metabolic profile, and an extended celiac panel were performed. Also tested were levels of 25-hydroxyvitamin D, ferritin, thyrotropin, free triiodothyronine, free thyroxine, thyroglobulin autoantibody, thyroid peroxidase autoantibody, and dehydroepiandrosterone sulfate.

Follow-up Care After the Initial Visit

SG returned to the office 2 weeks later to review the laboratory results. She reported that her hands were improving but she was still experiencing the rash and severe itching. Significant laboratory findings were a ferritin level of 6 ng/mL, a 25-hydroxyvitamin D level of 27 ng/mL, a thyrotropin level of 5.33 mIU/L with a positive thyroid peroxidase autoantibody, as well as a positive tissue transglutaminase antibody IgG. The results showed no positive findings for inhalant allergens. She had a positive IgG reaction to cow and goat dairy, beef, egg white, garlic, and almonds. At this visit, I prescribed vitamin D (10 000 IU/d), iron (25-50 mg/d), levothyroxine sodium (50 µg/d), and elimination of the reactive foods.

SG did not see a change in the skin after following the elimination diet for 4 weeks and was disappointed. She continued her supplement regimen but discontinued the diet restrictions. She had returned to her dermatologist and had a second biopsy performed, which revealed the same diagnosis of dermatitis. She had put herself on a vegetarian diet 2 days before seeing me. She was eating vegetables, fruits, rice, corn, and small amounts of plain yogurt. The rash started to clear 1 day after starting this restricted diet. I recommended a vegan diet, with quinoa and buckwheat being the only grains to eat. I also added omega-3 fatty acids (4000 mg/d) and had her restart the quercitin. We rechecked her levels of ferritin, thyrotropin, free triiodothyronine, free thyroxine, and 25-hydroxyvitamin D, which had all improved significantly.

SG had 3 weeks of no symptoms, but then the rash and itching returned suddenly. She decided to add acupuncture and Chinese herbs to her regimen, which helped significantly but did not completely clear up the symptoms. She noted that stress definitely increased the itching. At this point, SG was not consuming gluten or cow dairy. She had been taking vitamin D3 (5000 IU/d), iron (25 mg/d), omega-3 fatty acids (2000 mg/d), and levothyroxine sodium (50 µg/d). She was not using the calendula oil. We discussed ways in which she could react to stress that produced less anxiety and had her begin an anti-inflammatory combination of quercitin, milk thistle, artichoke, and turmeric, along with restarting the calendula oil topically.

SG came into the office ecstatic because she had had no itching since starting the anti-inflammatory herbal combination! She had experienced an episode of itching after eating cheddar cheese, but it cleared up within hours. She was doing well emotionally and liked the current regimen, so no changes were made in the treatment plan.

SG came in for her annual examination and made no mention of the eczema until I asked her about it. She had not had any episodes of itching or rash since the last visit. She no longer needed to take the anti-inflammatory herbs but continued on the gluten-free and dairy-free diet. At this visit, we rechecked her blood levels of ferritin, 25-hydroxyvitamin D, thyrotropin, free thyroxine, and free triiodothyronine. Her ferritin level was still low at 14 ng/mL, but the vitamin D level had improved to where she needed only 2000 IU/d. Her thyroid function was stable.

Most patients with atopic dermatitis or eczema have mild to moderate disease. However, a subpopulation of patients develop severe symptoms. Severe atopic dermatitis can manifest as widespread skin lesions and may be emotionally disabling, which significantly compromise a patient’s quality of life. This is certainly what SG had experienced. Eczema is multifactorial, and NDs are well trained to take into consideration not only the traditionally recognized causes of eczema but also any possible physical, mental, and emotional triggers, even if they are not well “researched”. I always ask patients what they think the underlying issue is and reassure them that they could be on to something, even if they think it sounds crazy. I explain to patients the theory of total load, or threshold. Our bodies can take only so much stress (whether emotional or physical) throughout a lifetime. Stressors can include work and family stress, chronic disease, antibiotic use, allergen exposure, hormonal changes, digestive dysfunction, poor diet, chemical exposure, and others. In the case of eczema, the immune system starts responding once the threshold is hit. Not only does the immune system need to be treated, but also the underlying dysfunctions must be addressed. Although treating eczema, particularly advanced eczema, can be challenging and frustrating for both the patient and practitioner, the case reported herein should bring encouragement to individuals having eczema and to those helping them. 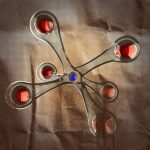 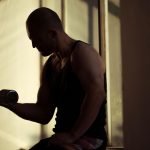