We usually think of curcumin in terms of cancer treatment, yet it may play an equally valuable role in the prevention and treatment of Alzheimer’s disease. Curcumin is the principal curcuminoid of the Indian curry spice turmeric. A fascinating story of theory, research and clinical trials has quietly unfolded over the last ten years. Turmeric and curcumin are about to hit the public’s awareness in a big way.

Curcumin for Alzheimer’s
Those of us in practice in the early 1990s, who can still remember anything that far back, will recall there was a lot of talk about ibuprofen and other non-steroidal anti-inflammatory drugs (NSAIDs) protecting against Alzheimer’s disease (AD). About 20 studies showed that people who took NSAIDs long term for whatever reason lowered their risk for developing AD. Of course, the problem with ibuprofen is that you can’t suggest people take it long term because of the potential side effects, especially liver and kidney damage. Looking for a safer and better ‘drug,’ Greg Cole and Sally Frautschy at UCLA tried curcumin. Curcumin is well known for its anti-inflammatory properties and is safe, even in large amounts. Unlike NSAIDs, curcumin also acts as an antioxidant; it stops damage caused by free radicals. Reactive oxygen damage is a main contributor to Alzheimer’s disease.

Research: AD and Curcumin
The current leading theory is that AD is caused by the accumulation of amyloid plaques between neurons in the brain. These plaques kill brain cells because they trigger inflammation that damages the cells. The plaques also produce free radicals that cause oxidative damage to nerve cells. Ibuprofen apparently slows this process by slowing the inflammatory reactions. Curcumin acts as an anti-inflammatory but also as a very potent antioxidant … a ‘dual action,’ as future advertisements will probably say.
If curcumin were protective against AD, one would think that in parts of the world where people eat a lot of turmeric there would be a lower incidence of AD. When Cole and Frautschy started their research, no one had published data on AD rates in India, where just about everyone eats turmeric in their food. The first data was published in 2001; people in India have the lowest incidence of AD in the world.

Chandra et al. reported in a 2001 issue of Neurology that of people 65 and older in Ballabgarh, India, only 4.7 per 1,000 person-years show signs of AD. They compared this incidence to that of people of the same age living in the Monongahela Valley of Pennsylvania. In the Pennsylvania group, 17.5 people per 1,000 person-years showed signs of Alzheimer’s. That puts the Indian turmeric eaters at about one-fourth the risk of the Americans. The Indians in this study had the lowest incidence of Alzheimer’s seen anywhere in the world (Chandra et al., 2001).

Eating curry also seems to be protective. In 2006, Tze-Pin Ng of the National University of Singapore tested 1,010 Singaporeans between ages 60 and 93. He also surveyed them about their eating habits. Those who ate curry “occasionally” and “often or very often” scored better on cognitive performance tests than did people who never ate curry or only rarely did. Curry powder is a blend of spices; the curry powder used in Singapore contains high amounts of turmeric (Ng et al., 2006).
A February 2005 paper by Yang et al. says that curcumin does more than act as an anti-inflammatory and antioxidant in the brain. It doesn’t just prevent the amyloid clumps from causing damage: It actually prevents them from forming into plaques in the first place (Yang et al., 2005).
Wait, there is more.

In 1992, researchers in Amala Nagar, India, gave people 500mg of curcumin a day for just one week and measured a 29% increase in HDL cholesterol and 11% drop in total cholesterol (Soni and Kuttan, 1992). In these modern times, I am hesitant to reference a paper now 15 years old. Luckily, a 2007 paper explains that this effect is because curcumin changes the expression of certain genes that make cholesterol (Peschel et al., 2007). Certainly, this is relevant to cardiovascular disease, but this cholesterol lowering effect is also important with Alzheimer’s.

Studies during the 1990s linked high cholesterol with increased risk of Alzheimer’s disease. Cholesterol accumulates within the brain plaques and may aid amyloid proteins to bind together. This explains the current push by pharmaceutical companies to convince us that Alzheimer’s is just a symptom of statin deficiency (Kuller, 2007). The research, though it links cholesterol with Alzheimer’s, has not shown that statins provide protection.

The immune system also plays a role in AD. Macrophages normally cruise through the brain and swallow up the amyloid plaques as they form. In people who develop Alzheimer’s, these macrophages are not doing their jobs properly. Milan Fiala from the Los Angeles Veterans Affairs hospital took macrophages from Alzheimer’s patients and mixed them with amyloid plaques. Published just this past July in the Proceedings of the National Academy of Sciences, Fiala’s team reported that the macrophages were total slackers, exhibiting anthropomorphic leukocytic shrugs of, “whatever.” They ignored the plaques and showed no tendency to consume them. Fiala attributes this lack of response as due to decreased expression of the gene MGAT3.
Exposing the macrophages to curcumin returned MGAT3 to its normal state and restored the macrophage’s interest in destroying plaque, in about 50% of the cells (Fiala et al., 2007).

All of these studies added up to enough evidence in support of using curcumin that in April 2005, John Ringman with Cole, Frautschy and few other associates at UCLA announced the start of a clinical trial using curcumin in Alzheimer’s patients (Ringman et al., 2005). Ringman is comparing two doses, 2000mg and 4000mg per day, in a double-blinded, placebo-controlled trial with 33 patients. Their results are expected early next year.

These doses are similar to those already shown as safe and well tolerated in Phase I trials for cancer. It will not hurt to give curcumin to people showing signs and symptoms of Alzheimer’s disease while we await Ringman’s report.
It might help.

Jacob Schor, ND is a 1991 graduate of NCNM and has practiced in Denver for the past 14 years. He served as president of the Colorado Association of Naturopathic Physicians (CANP) from 1992 to 2000, and continues to serve as legislative chair for the organization. He is in practice with his wife, Rena Bloom, ND, former CANP president, at the Denver Naturopathic Clinic. Contact: Jacob@DenverNaturopathic.com.

Supporting the Treatment of GI Disease with IV TherapyGastrointestinal 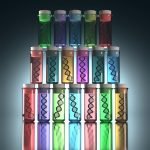