Marla is a bright, lively and passionate person, and a very professional teacher. She has come in to discuss her son Richard, who is 12 and has been diagnosed as suffering ADHD. Marla says he is “the most active child I have ever seen.”

Marla describes Richard as restless, impulsive, and moody. He does not perceive social cues and sometimes appears “unreachable” when adults are trying to guide him in stopping an unwanted behavior like bothering his sister. He is easily annoyed by his sister, especially her singing. He can appear very hyperactive, throwing himself physically into play in a “bang and crash” manner. He is built to move—an excellent athlete—and is driven to physical activity. He likes to climb, jump and yell. He needs three hours of heavy physical activity daily, absolutely. Without enough activity in a day, he gets irritable or may cry.
Richard can fixate on ideas. He can be moody and morose, and gets hopeless and irritable, especially when hungry. During movies he continually asks questions, and he seems unusually sensitive to scary movies.

He has a non-verbal learning disability and a red/green color deficiency. Lately he seems to be more irresponsible. He is avoiding tasks and Mom describes him as “lazy.” Nonetheless, he is doing well at school.

His symptoms improved when he was put on Concerta® but at such a cost! Richard’s appetite diminished, his sleep became disturbed, and he is more morose since starting the medication. His sense of humor vanished, but has recently returned a bit. “We do miss our silly, good affectionate off-meds Richard,” Marla says. When he is off his medication, he wants to stay at home with family and play with his sister, but he is too rough.

Richard has nasal allergy symptoms, watering eyes and sneezing. His mother says he has been getting lots of pustules recently. He always wants carbs, like bread, with cheese.

The repertory chart (Fig. 1) to me shows that I am having trouble focusing on a good image of a remedy. There is a lack of consistency emerging, and no remedy stands out. Ultimately, because of the laziness, pustules and high activity level, I prescribe Sulphur 200C three times weekly. 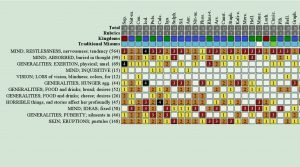 Within a month the response, his mother reports, “His skin is much improved. The pustules are not coming on a daily basis. He is still lazy, but less argumentative and more affectionate, even while on the medication; off medication, he is the same.”

I continue on this remedy because there has been some change. Even though the changes were not the ones I was aiming for, improvements on an emotional level and the skin are encouraging. Marla is happy with seeing some change but wants to be able to risk having him off the Concerta. I do not really have confidence this remedy will do it but see nothing better.
On we march.

For several months, Sulphur and occasionally Nux Vomica do show some shifting, but not the decisive hit I am hoping for in the hyperactivity, which is the core of the pathology, and despite the promise in the Organon that a newer more decisive symptom might emerge—no go. I am miffed with Sam.

Marla does say he is more himself, but that does not cut it, because once off his meds his symptoms return, perhaps less than before, but still he does relapse on stopping the meds. What is it I am missing?

Marla is very astute and about 6 months into treatment she is using a metaphor I have not heard before, or perhaps it has simply not registered for me before! “He always wants to ‘do’—it is all the time as if he is running on a motor.” I took this to mean he is simply active and in need of physical outlet. Visit after visit, the sulphur is “okay” but not a “bull’s eye,” and visit after visit, the same metaphor comes up, perhaps in slightly different clothing. Once Marla did say he is “constantly humming as if a motor is running.”

I did finally ask what this meant. Marla gave an example of Richard wanting the family to always play a game of his creating together, and opposition could evoke an outburst of anger. It is as if his mind is constantly working at inventing things for the family to do under his direction.

Mom also mentions his acutely sensitive sense of smell.
This felt like a new twist in my understanding of what had long been there but I could not see. I used the TBR2, which is a “Summary Repertory,” and hoped it might quickly show a new possibility.

From Hering: “Unusual activity of mind and body.”

“Great loquacity, brain feels clear and is active, he feels strong enough to do anything, feels impelled to push things…”

Now this seemed to hit the spot. I kept thinking. I lifted my cup to my mouth and took yet another sip of coffee I did not really want. It was my third of the day. I happened to notice my mind was racing and my body felt as if it was humming. Oh my!!!! This was it—of course—I was proving it literally.

Coffee 30C once daily was the prescription (Fig. 2). Follow up one month later.

Marla exclaimed, “I could not believe the reaction. Since this remedy we have discontinued the meds! Until this, without the meds he could be unreachable, silly, moody, and extreme. He would want the family to “do” together, to play, and it would go wrong. His sister would do something against the plan, and he would storm away in frustration. He would want Kraft dinner, grilled cheese, or nothing. Since the new remedy, his percent improvement must be in the nineties!”

It has now been 3 months and we are doing just fine.

Marla reports a classic encounter with the Developmental Paediatrician who patiently listened to the recounting of this story and how Homoeopathy won the day.

Once she finished, he said, “You know, Homoeopathy has been debunked.”
Marla carefully responded, “Yes I know—but it works.” 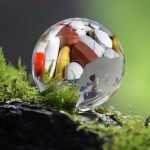 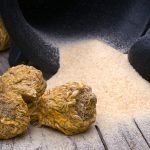