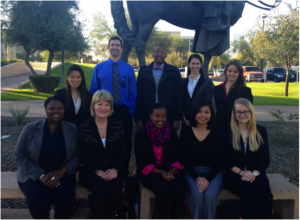 A group of Naturopathic medical school students from the Southwest College of Naturopathic Medicine visited the Arizona State Capitol on Wednesday, January 22nd 2014 for the first ever Arizona Student Lobbying Initiative (AZ SLI).

AZ SLI was a collaborative effort between the Naturopathic Advocacy and Community Awareness Team (N-ACT) and the Arizona Naturopathic Medical Association.  N-ACT is a student organization at SCNM with a mission to educate students on healthcare legislation, encourage participation in legislative activities, and increase involvement in the local health community in order to build professional relationships.  Twelve students participated in the event with the goal of promoting Naturopathic medicine, endorsing the curriculum and educational experience for Naturopathic medical school students, and supporting the legislation that affects Naturopaths in Arizona.

While students spent the morning at the Arizona State Senate Building, they were privileged to have Senator Kelli Ward, Senator Nancy Barto, and Senator Katie Hobbs speak to them about their experience as senators and gave advice on communicating with legislators.  Additionally, the students attended a House Health Committee Hearing where they were introduced to the Committee members.  In the afternoon, the students had an incredible opportunity to have individual meetings with various Senators and Representatives.  During their meetings, the students spoke about their passion for Naturopathic medicine, their education, and about two important bills relating to Naturopathic medicine in Arizona: SB 1050 and SB 1043.  SB1050 will expand the providers of telemedicine to include naturopathic physicians, and SB 1043 pertains to prescriptive rights of naturopathic physicians for hydrocodone combination drugs. To bring the amazing event to a close, the students observed the Senate House Committee vote on these two pieces of legislation as they move on to the next step in the legislative process.

Second year medical student Alyssa Annello described her experience as “empowering”.  “I was very impressed at how the Senators and Representatives really listened to what we had to say as students. I feel very motivated to talk to legislators again in the future and advocate for the profession and my future patients,” said Annello, who is the Legislative Co-Chair for the student organization N-ACT.  AZ SLI was an invaluable experience for the SCNM students, and one that will hopefully be repeated in subsequent years.