Natural Approaches to Anxiety: Less Stress When You Don’t Guess

The DSM-IV-TR requires 6 consecutive months of anxiety symptoms to meet its definition criteria. But even earlier, many patients seeking naturopathic healthcare may be struggling with their daily functioning.

Indeed, anxiety disorders are the most common mental illness in America, affecting around 18% of the population according to the National Institutes of Health (NIH).1 Data from the NIH show that women are 60% more likely to experience an anxiety disorder than men.

Many factors can increase a person’s likelihood of experiencing anxiety. Variables include substance abuse issues, medical factors (eg, an adverse effect of prescriptive medications), genetic factors (eg, errors with neurotransmitter receptors), and environmental factors (including trauma, life stress, toxicities, and fungal exposure). Anxiety may represent a combination of these factors or may be related to brain chemistry (including abnormal neurotransmitter and stress hormone levels).

Anxiety is simply sympathetic nervous system overdrive. It is processed in the brain as a natural response to perceived fear and is a necessary warning adaptation. It only becomes troublesome when it persists or is caused by no specific stimulus.

Chronically elevated cortisol levels, frequently seen in sympathetic overdrive, result in desensitization of cortisol receptors in the body. Unhealthy cortisol receptors prevent the negative feedback mechanisms found throughout the hypothalamic-pituitary-adrenal axis and result in higher levels of cortisol, epinephrine, and norepinephrine and in lower levels of stress-relaxing neurotransmitters. Circadian rhythms also become altered, with cortisol levels spiking in the evening and at night.

Long bouts of chronic stress gradually reduce the body’s ability to calm itself, resulting in elevated excitatory activity. Once the excitatory arm of the nervous system has free rein, it eventually results in neurotransmitter and adrenal hormone depletion and ultimately in exhaustion, psychosis, or both.

A common contributing cause of increased excitatory stimulation is elevated glutamate as a result of an overly active immune system. Glutamate is released in high amounts once certain immune (dendritic) cells bind to antigens and mature. This glutamate is highly excitatory and can be a root cause behind serotonin and gamma-aminobutyric acid (GABA) imbalances and depletions. Many drugs, including alcohol, affect GABA receptors. By stimulating these receptors, you can reduce amygdala and locus ceruleus activity, resulting in calming. Unfortunately, this is only symptom management for most, and root cause problems are often never addressed.

When trying to help patients manage anxiety, physicians have largely been at a loss. Because anxiety can present in a variety of different ways, practitioners must rely on patient reporting and anecdotal evidence. Most often, medications such as selective serotonin reuptake inhibitors (SSRIs) are prescribed first. In order for an SSRI to work effectively, a minimal amount of the neurotransmitter serotonin must be present. For patients with severe depletions of serotonin, the SSRI is unlikely to work and may result in negative adverse effects. 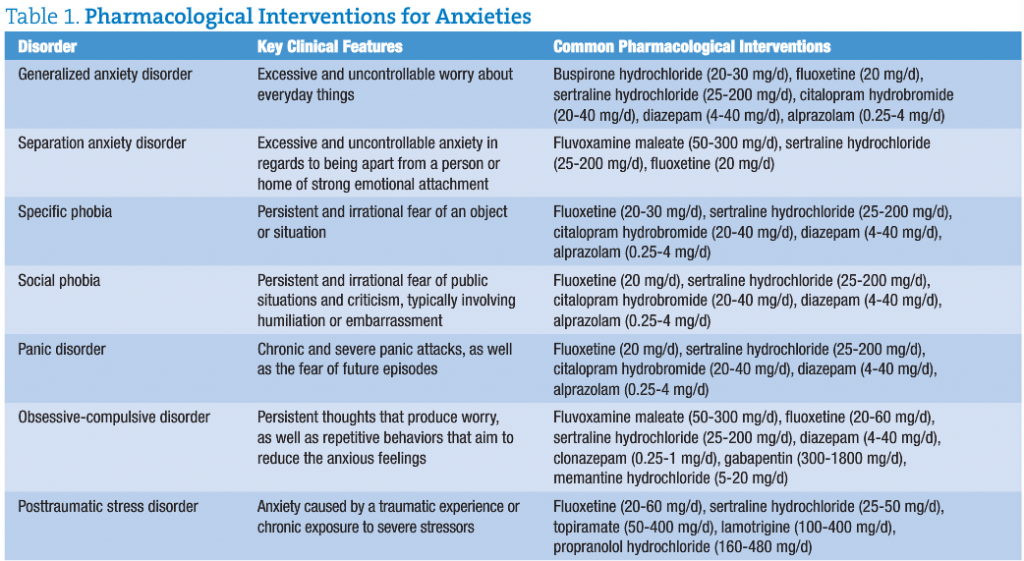 Anxiety disorders can vary greatly in severity and duration; accordingly, multiple treatment plans are available. Assessment of neurotransmitter and adrenal hormone levels can provide valuable information about the status of the nervous system and its interaction with other systems in the body. Measuring glutamate levels can help to identify the presence of inflammation and may be a contributing cause of anxiety. Once the biochemical abnormalities contributing to anxiety are identified, a personalized treatment approach can be undertaken. At NeuroScience, Inc (Osceola, Wisconsin), where I serve as director of clinician affairs, we refer to this method as “assess and address.”

A simple baseline (second urine) collection of urine can be assessed for neurotransmitter and hormone levels. Those I routinely test for include the following: (1) calming (serotonin, GABA, glycine, and taurine [amino acids with neurotransmitterlike activity]), (2) stimulating (phenylethylamine, epinephrine, norepinephrine, and glutamate), and (3) modulating (dopamine).

A 4-point saliva collection, during the same day as the urine neurotransmitter collection, should be obtained to assess adrenal hormone levels of cortisol and dehydroepiandrosterone. Comparing adrenal medulla activity (epinephrine and norepinephrine) along with cortex activity (cortisol and dehydroepiandrosterone) paints a better picture of overall adrenal and hypothalamic-pituitary-adrenal axis health. Together, the data derived from these tests can help identify depletions and circadian rhythm alterations.

Most patients I have seen with long-term anxiety experience mixed results from prescriptive therapies. Patients either do not feel better on them, they wish to avoid synthetic chemicals, or they suffer undesirable adverse effects such as low libido or brain fog. Regardless, I keep them on their medications until I have a better picture of their biochemistry.

Performing neuroendocrine testing yields valuable data about how to best boost calming neurotransmitter levels and modulate the stimulating ones. I typically do not begin titrating down prescription medications until the patient has felt “well” for at least 2 months.

Treatments for anxiety typically consist of replacing low neurotransmitters with precursors (5-hydroxytryptophan and L-tryptophan), providing natural GABA receptor stimulators (4-amino-3-phenylbutyric acid), and offering GABA enhancers (taurine and glycine). Elevated cortisol levels and receptor damage can be addressed with phosphatidylserine and Banaba leaf (corosolic acid). Excessive glutamate is managed by reducing levels with N-acetylcysteine and L-theanine. Ultimately, the immune insult behind the elevated glutamate must be assessed and addressed (whether it is leaky gut, allergies, infection, dysbiosis, etc).

Anxiety can present in a variety of different ways, so there is no “magic bullet” for all patients. Assessing biomarkers can help determine an effective and individualized course of intervention that takes into account lifestyle, nutrition, genetics, and other health factors. Individualizing nutritional therapies based on testing is a great adjunct to other naturopathic treatments and therapies. Either in conjunction with the patient’s other medical team or as stand-alone treatment, natural approaches to treating anxiety can have a powerful and meaningful impact on your patient’s life. 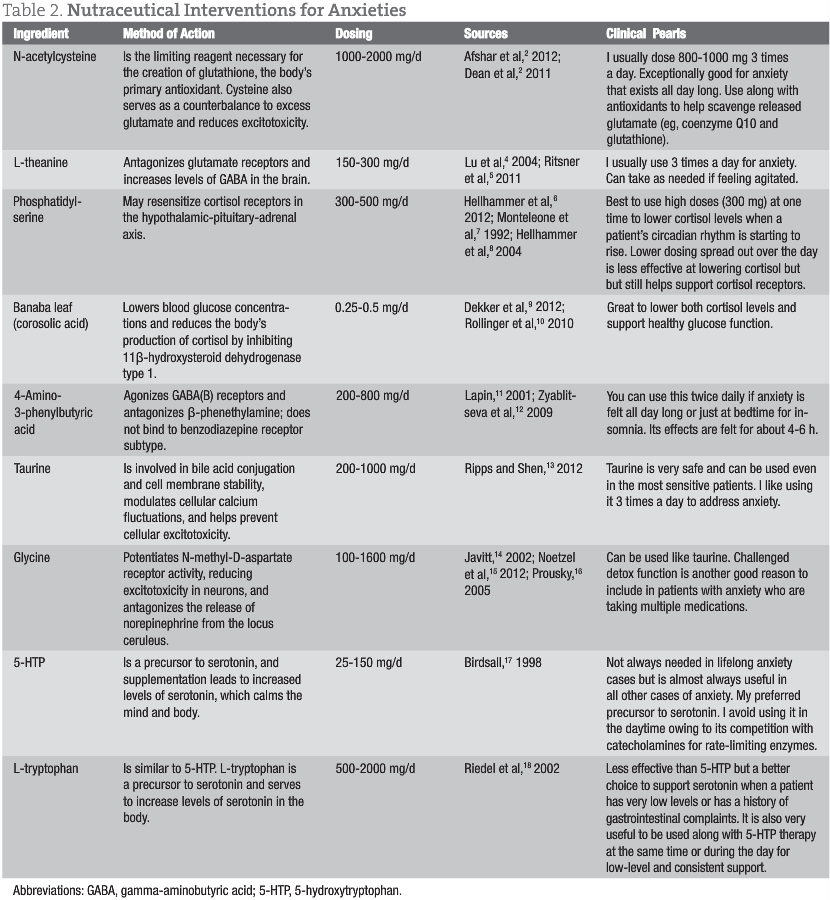 All neurotransmitters were elevated, with the exception of phenylethylamine (normal). Cortisol was elevated at the 5 pm and 11 pm testing times.

(Note: The patient did not wish to test for food sensitivities but did eliminate dairy and gluten. This was requested based on elevated glutamate levels and was not based on a history of gastrointestinal complaints.)

The patient’s sleep improved immediately. Anxiety and obsessive-compulsive disorder was reduced by 80% in 2 months. With assistance and supervision of his psychiatrist, the patient’s medications were titrated down over 6 months. At this time, he is currently off all prescription medications. 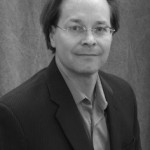 Bradley Bush, ND received his naturopathic doctor degree from National College of Naturopathic Medicine (Portland, Oregon) in 2000 and is currently the director of clinician affairs for NeuroScience, Inc, Osceola, Wisconsin. Dr Bush specializes in neuroendoimmune health, nutrition, and infusion therapies. His focus is on addressing gastrointestinal and hypothalamic-pituitary-adrenal axis disturbances in addition to nutritional deficiencies as a cornerstone of patient care. He is a coauthor of the ND: Notes Science Board Review and is founder and past organizer of the annual Pharmaceutical Perspectives Conference. Dr Bush currently sits on the board of the Naturopathic Education and Research Consortium. 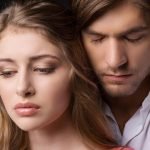 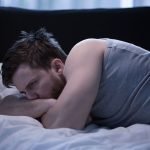