Steroidal and peptide hormones have significant immunomodulating properties, and a characteristic pattern of disruption is commonly seen in patients with autoimmunity. Relatively simple natural and/or pharmacologic interventions can be used to safely and effectively correct hormonal disturbances, with the dual benefits of improved overall health and the amelioration of autoimmunity. I have coined the term “orthoendocrinology”‡ to describe this technique of addressing numerous disturbances in endocrine function by using the “right hormones,” based on a similar conceptual model as Linus Pauling’s suggestion that health might be optimized by the use of the “right molecules” (orthomolecular medicine, orthomolecular nutrition) rather than endless reliance on the cyclical prescriptions of what he called “toximolecular” substances.

I will keep this overview and application straightforward, simple, and clinically relevant; readers should appreciate that this therapeutic approach of hormonal optimization is only 1 of 7 major areas of intervention in my anti-rheumatic therapeutic approach for addressing the causes of sustained inflammatory responses, formerly called “chronic inflammation.”

This discussion’s focus on hormones/endocrinology is, in fact, the sixth of the 7 areas of intervention for reducing inflammation:

Of course, these interventions are most effective when employed within a comprehensive treatment plan that includes all components of the overall protocol. The colorful graphic (Figure 1) illustrates how these 7 factors coalesce to effect immunodysregulation that underlies states of so-called chronic inflammation, seen at its worse in the clinical manifestation of autoimmunity. 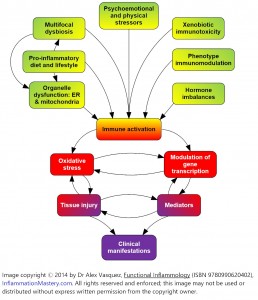 Hormones affect and are affected by inflammatory status. In this section, I will focus on the 7 hormones of greatest significance to inflammatory/autoimmune homeodynamics. Readers should mentally organize this information in the following way:

Thyroid status is considered separately. Thyroid status is a less potent influence on inflammatory balance when compared to the 6 other hormones listed below; however, occasionally a patient will have severe musculoskeletal inflammation (eg, bilateral adhesive capsulitis, oligoarthritis, proximal myopathy2) that is solely responsive to thyroid hormone monotherapy. I have reviewed the assessment and treatment of hypothyroidism, as well as Hashimoto’s disease, in a small review elsewhere,3 and within a more complete context addressing the entirety of inflammation and assessment and treatment of common autoimmune disorders.4

Hormonal Testing and Treatment in Patients with Autoimmunity

Patients with autoimmune disorders commonly have deficiencies or other imbalances in their hormones, particularly steroid and “sex” hormones, which are potent immunomodulators. The classic pattern which may be expressed incompletely in an individual patient, is that of excess prolactin and estrogen, and insufficient cortisol, testosterone, and DHEA. The role of progesterone seems less clear, with some patients showing normal, excess, or insufficient amounts; obviously, this can be tested in an individual patient (random serum test in men, or Day 21/mid-luteal serum sample from a premenopausal woman).

All testing methods – whether via serum, saliva, or urine – have their individual advantages and disadvantages. Generally however, serum is considered the standard; following this, I prefer polyhormonal assessment with 24-hour urine collections. The last resort is salivary testing, which is the most controversial and least reliable for most hormones. Thyroid autoimmunity and hypothyroidism are both common in autoimmune/inflammatory patients; comprehensive thyroid assessment with TSH, T4, and anti-TPO antibodies can be justified in nearly any rheumatic patient.

Besides its obvious role in lactation, prolactin is a polyfunctional hormone that, at the very least, stimulates the liver to produce excess sex hormone-binding globulin (SHBG), which adsorbs sex hormones, rendering them less effective due to reduced bioavailability. The resultant functional hypogonadism deprives the immune system of the modulation/suppression normally effected by these hormones. Beyond its well-known physiologic roles, prolactin is now known to be powerfully proinflammatory.5 Patients with rheumatoid arthritis (RA) and systemic lupus erythematosus (SLE) have higher basal and stress-induced levels of prolactin compared with normal controls.6,7 Patients with scleroderma have relatively high prolactin8 and low DHEA.9 Patients with polymyalgia rheumatica have elevated prolactin that correlates with increased symptomatology.10

Prolactin’s effect of increasing hepatic production of SHBG reduces bioavailability of testosterone, thus depriving cells and tissues of testosterone’s potent anti-inflammatory and immunoregulatory properties. Prolactin is routinely measured in serum; high values should be reduced with effective treatment, whether nutritional, botanical, or pharmacologic:

As a marker for insulin resistance, and thus possibly xenobiotic exposure and mitochondrial dysfunction as well, fasting serum insulin is a surrogate marker for an inflammatory state. Insulin itself shows some anti-inflammatory effects; however, in a clinical context, elevated serum insulin correlates with systemic inflammation and dysmetabolism. Although major medical labs use an insulin reference range of 2.6-24.9 μIU/mL, such a range is clinically ridiculous except for screening for overt pathology; this range should be replaced with the following:

Nearly all autoimmune disorders are more common in females than males, and occasionally a menstrual exacerbation is noted, suggesting a possible immunodysregulation by estrogen. Despite the complex and multifaceted nature of the endocrine system, we may safely generalize that the estrogens are immunostimulatory and immunodysregulatory, while androgens are immunosuppressive and immunoregulatory30; thus, elevated estrogen:androgen ratios promote/exacerbate autoimmunity. Furthermore, many chemical/pollutant xenobiotics have estrogen-like effects (“xenoestrogens”) and are consistently associated with induction or exacerbation of autoimmunity. So-called “estrogen-replacement therapy” used in postmenopausal women increases the risk of lupus and scleroderma.31 Men with RA show an excess of estradiol and a decrease in DHEA, and the excess estrogen is proportional to the degree of inflammation.32 Estrogen(s) can be measured in serum and/or 24-hour urine samples. Beyond looking at estrogens from a quantitative standpoint, they can also be qualitatively analyzed with respect to the ratio of estrone:estradiol:estriol, as well as the balance between the “good” 2-hydroxyestrone and the purportedly carcinogenic and proinflammatory 16α-hydroxyestrone. Interventions to lower estrogen levels include the following:

Androgen deficiencies predispose to, are exacerbated by, and contribute to autoimmune/inflammatory disorders. A large proportion of men with SLE or RA have low testosterone39 and suffer the effects of hypogonadism, including fatigue, weakness, depression, slow healing, low libido, and difficulties with sexual performance. Particularly in men, blood samples should be drawn for both free and total testosterone, along with serum estradiol. Since some labs accept ridiculously low levels of testosterone as “within normal limits,” clinicians should not necessarily wait until the patient is pathologically hypogonadal before implementing treatment. Clinicians must appreciate the interrelationship of testosterone with estrogen in order to interpret the patient’s status appropriately and implement proper treatment.

Conversely, low testosterone along with low estrogen indicates the appropriateness of testosterone replacement and/or corrective treatment of the cause of the hypogonadism. The need for co-administration of testosterone and anastrozole is not uncommon, in order to raise testosterone without leading to an iatrogenic increase in estrogen due to “estrogen shunting” by aromatase. Follow-up testing of testosterone and estradiol 4-8 weeks after implementing testosterone replacement is advised to ensure optimal hormone status and that the additional immunoregulatory testosterone is not being shunted into immunodysregulatory estradiol. For the purpose of gently but effectively modulating/lowering estrogen levels, anastrozole is typically administered as 1 mg, 1-4 times per week. The drug appears to have a wide margin of safety, and doses of 1 mg per day are commonly and appropriately used (as one of the safest and most effective treatments against breast cancer) in women with estrogen-responsive breast cancer.

As with any modulation/administration of testosterone and estrogen, follow-up testing of hormones and serum lipids is recommended to ensure the attainment of optimal status and the avoidance of complications, such as suppression of HDL synthesis, which would be expected to have adverse cardiovascular consequences. Assessing serum PSA is a prerequisite to testosterone administration in men. Testosterone therapy improves clinical status and well-being in women with RA.40 Transdermal testosterone creams can be used, with the dose tailored to serum and clinical response.

In physiologic doses, cortisol is immunoregulatory and mildly yet significantly immunosuppressive (“physiologic immunomodulation”), while at higher doses and particularly in its synthetic forms, such as prednisone and prednisolone, the hormone becomes immunosuppressive (“pharmacologic immunosuppression”) and produces additional adverse effects such as weight gain, truncal obesity, hypertension, glucose intolerance, and increased susceptibility to infections – the classic manifestations of hypercortisolemia seen in Cushing’s disease.41

Insufficiencies of cortisol production contribute to the development and perpetuation of allergies, fatigue, inflammation, and autoimmunity.42 The works of Drs John Tintera and William Jefferies have remained important despite being ignored by most endocrinologists; Jefferies’ books43 and articles are still widely available and provide concepts and clinically relevant applications. In a 1998 summary by Jefferies44 on the etiology of rheumatoid arthritis, he reviewed evidence suggesting that subacute hypoadrenalism results in insufficiencies of cortisol and DHEA, both of which are necessary for immunomodulation and immunocompetence; insufficiencies of these hormones leave the body vulnerable to chronic infections (ie, multifocal dysbiosis, as detailed previously) and the systemic proinflammatory sequelae that result in so-called “autoimmunity.”

Differential diagnoses in patients with low adrenal function include congenital adrenal hypoplasia, adrenoleukodystrophy, autoimmune Addison’s disease, and chronic hypopituitarism. A small, short-term, randomized, crossover clinical trial published in Lancet showed benefit of 5-10 mg/day of cortisol in patients with chronic fatigue syndrome.45 Supplementation with up to 20 mg per day of cortisol is physiologic; higher doses in the range of 40 mg per day may benefit patients, especially during times of stress, but are adrenosuppressive. My preference is to dose 10 mg first thing in the morning, then 5 mg in late morning, and 5 mg in mid-afternoon, as an attempt to replicate the diurnal variation and normal morning peak of cortisol levels. In patients with hypoadrenalism, administration of pregnenolone in doses of 10-60 mg in the morning may also be beneficial; DHEA supplementation is beneficial for patients with adrenal insufficiency.

Table 1. Diagnosis of Adrenal Insufficiency in Children and Adults

Based on these financial, safety, and effectiveness considerations, the administration of DHEA is thus reasonable for patients with moderate to severe autoimmune disease. Furthermore, since optimal clinical response appears to correlate with serum levels in the supraphysiologic range,54 treatment may be implemented with little regard for initial DHEA levels, particularly when 1) the dose of DHEA is kept as low as possible; 2) duration is kept as short as possible; 3) other interventions are used to address the underlying cause of the disease; and 4) the patient is deriving benefit and the risk-to-benefit ratio is favorable.

Always use the lowest dose of any hormonal intervention necessary to achieve the desired result, based on dual consideration of laboratory results and the patient’s response to treatment. Lower doses of each intervention can be used when more interventions (eg, nutritional, mitochondrial, anti-dysbiotic) are used.

As of November 15, 2005, the word “orthoendocrinology” cannot be found either on PubMed/MEDLINE or Internet search using Google, Yahoo, or MSN search engines. I first published this term in Integrative Rheumatology in 2006, now published as Naturopathic Rheumatology v3.5.

Alex Vasquez, DC, ND, DO, FACN, is the author of many books, including Functional Medicine Rheumatology, AntiViral Strategies and Immune Nutrition, and the recent 700-page textbook Functional Inflammology: Volume 1). He has also authored more than 100 publications in professional magazines and peer-reviewed medical journals, such as British Medical Journal (BMJ), Journal of Clinical Endocrinology and Metabolism, Journal of the American Medical Association (JAMA), Alternative Therapies in Health and Medicine, and Arthritis & Rheumatism, the official journal of the American College of Rheumatology. 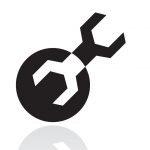 PCOS and Contraception: A Wrench in the WorksEndocrinology, Fertility, Women's Health 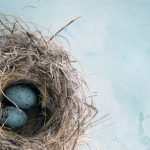 Fertility and Toxicity: The Powerful Effects of Endocrine DisruptorsEndocrinology