The Quest for the Student Voice of the Vis

According to folklorists and other narrative scholars, the hero’s journey forms the basic template for all great stories. The hero begins in the ordinary world, and receives a call to enter an unknown world of strange powers and events. Along the journey, the hero overcomes trials and obstacles to earn a great reward. I think the beauty of the hero’s journey is that somewhere along the way, an incredible transformation takes place. It becomes impossible for the hero to return in the same state in which she left. I can already see my own transformation taking place.

One of the things I love most about students and physicians in the naturopathic profession is that everyone has a story. Naturopathic medicine is a calling and, more often than not, those who have answered the call have experienced a unique progression of circumstances fit for a hero’s journey. Not so long ago I was living an ordinary life, working an ordinary job; I had no idea I was about to stumble upon something amazing that would change the course of my life forever.

Growing up in Virginia, my exposure to naturopathic medicine was exactly zero before starting my career as a medical student at the National College of Natural Medicine (NCNM). Being somewhat infamous for my inability to keep things small-scale, I determined that the most effective and efficient way to share my new-found passion was through national policy. I attended the AANP’s DC Federal Legislative Initiative (DC FLI) during my first year in medical school, and was hooked. I found advocating for this medicine to be incredibly empowering, addicting. As we all know, every journey begins with a single step, and mine was being elected as the NCNM chapter president of the Naturopathic Medical Student Association (NMSA).

We all can look back on our journeys and recognize those pivotal moments in time, decisions that forever altered our course. My first moment was choosing naturopathic medicine. The second was getting involved in the NMSA. I have served as chapter president, president-elect, and now serve as president. Each position has offered unique hardships, learning experiences, and opportunities for growth. I am grateful for it all.

Mission: The NMSA acts as a unified, sustainable, ethical and professional voice for naturopathic physicians-in-training across North America. The main emphasis of the NMSA is to function as an advocate for naturopathic physicians-in-training, and provide educational and community building initiatives that prepare students with the tools, experiences and connections necessary to become successful physicians.

Students have always played a fundamental role in the progress of naturopathic medicine. Students have helped establish schools, acted as teaching assistants, run the admissions office, invested personal savings, mopped the floors, paid the bills, and created both schools and communities that began to flourish. These same students – the founders of modern naturopathic medicine – became the teachers and leaders of today.

NMSA is the culmination of 10 years of student work to build a student advocacy organization parallel to the American Medical Student Association (AMSA). NMSA is arguably the largest naturopathic organization in North America, representing 8 ND program chapters with over 2400 members in 2 different countries. Today, NMSA is a student-governed, international organization committed to representing the voice of naturopathic physicians-in-training.

NMSA is committed to idealism, social justice, access to healthcare, education and meaningful institutional change. Naturopathic medical students are activists, collaborators, and change makers, and NMSA aims to create community and momentum in education, medicine, research, and public policy. NMSA is active in all areas of student concern in the national and international arenas, including professional development, residency development, access to preceptorship, curriculum standardization for transferability of credit, career opportunity development, and leadership training. NMSA leaders represent the student voice at every education, healthcare, and professional planning table.

As a completely volunteer-based, student-governed and -run organization, NMSA has a unique set of obstacles and challenges. Leadership turnover is constant and for most, time spent as a student is limited to 4 years. This makes serving and supporting students a somewhat urgent matter. NMSA does not have the luxury of instituting change or developing programs and projects over the course of several years; rather, it has adapted by identifying effective short-term, high-yield projects and solutions to provide maximum benefit to current students. Students are a creative and innovative demographic and consistently rise to the challenge of making something great from nothing. Of course setbacks come, but like an antibiotic-resistant bacterium, NMSA dusts itself off, adapts, and comes back stronger than ever.

The current NMSA board officially took office in August 2014 and hit the ground running during the August leadership retreat. The first task was to create an organizational opportunity supporting student participation in Naturopathic Medicine Week in both the United States and Canada. Within hours, NMSA had created the Naturopathic Medicine Week Challenge (NMWC) – an event that fostered the students’ innate sense of friendly competition, and focused it on advocacy efforts. Students from each school complete advocacy action items throughout the week to earn points for their school. The event was debuted in the United States in October, and featured a congressional campus visit at Bastyr University-California, a kale-eating contest, yoga classes, a montage of students reciting the naturopathic oath, and countless social media posts.

This event highlighted the ingenuity and passion found in our students, and the capability of our students to effect positive change. Many students are too humble to recognize this immense potential within themselves. NMSA aims to support students in finding their voice and acting on their power.

NMSA has a number of regular projects in progress, including:

NMSA participates in advocacy and public affairs by training student leaders in public affairs and legislative work. NMSA delegates participate in legislative efforts at the annual DC FLI, sit on advisory groups at the American Medical Student Association and the Naturopathic Coordinating Council, and assist in licensure efforts.

NMSA hosts a fund enabling naturopathic students to participate in extracurricular conferences and educational opportunities available to students from all accredited naturopathic programs in the United States and Canada. A subset of this fund is allocated to students active in leadership and public affairs work.

The Future of NMSA

Today’s naturopathic medical students are entering the profession in a time of healthcare transformation. There is a desperate shortage of primary-care providers looming on the horizon. There are medical homes and integrative practices that are embracing a more patient-centered model. There are more states and provinces licensing naturopathic physicians than ever before. Students are also entering the profession with a crushing student debt-load, lack of residency placements, and few job opportunities outside of an entrepreneurial private practice. In the current academic year, the average first-year naturopathic program tuition and fees are $32 811 for US students and $22 471 for CAN students. When living expenses are added, the student debt for a professional degree in naturopathic medicine is often hundreds of thousands of dollars. Unsurprisingly, students care about access to scholarships, loan forgiveness programs, and professional practice opportunities. The profession has flourished in recent years, but there is still much more work to be done.

NMSA will be holding its first strategic planning session in January 2015. Student leaders will come together and set the future course of NMSA. One exciting project that NMSA has committed to is the collaboration with Naturopathic Doctors International and the World Congress of Chiropractic Students to launch an international student association akin to the World Naturopathic Federation established in July 2014. Increasing student member engagement in NMSA and the profession is a consistent priority. NMSA aims to balance the academic setting with fun and experiential events like The Gathering and the NMSA Annual Conference, both of which will be held in San Diego in August 2015.

In only a decade, the Naturopathic Medical Student Association has gone from a small group of motivated and forward-thinking students, to an international non-profit organization serving over 2400 members. NMSA has experienced tremendous growth, accomplished goals, and has overcome setbacks, becoming more refined in the process. Students are incredibly grateful for the support and guidance of sponsors and affiliate organizations as NMSA undertakes a hero’s journey of its own. 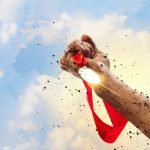