The moon, representing fertility, controls the waxing and waning of a woman’s cycles during her reproductive years. Moon energy represents a deep moistening and cooling nature.

Influence From the Planet Jupiter

In menopause, the influence of the moon yields to the energies of the planet Jupiter. Jupiter energy is expansive, and controls the etheric realm, that of spirit. Jupiter is known as the Greek god of wisdom, society, and the political state. Menopause is a time in a woman’s life when she is called upon to share her wisdom, that which she has accumulated over the years of her life, and to expand her areas of influence beyond home and hearth into the greater society.

The Liver, the wood element in Traditional Chinese Medicine (TCM) 5 element theory, which is connected with fluid movement throughout the body, is ruled by Jupiter. The drying and heating aspects of menopausal symptoms, including vaginal dryness, hot flashes, joint pain and degeneration, and osteopenia and osteoporosis can all be linked to the functions of the liver and its ruling by Jupiter.

As the time of perimenopause and menopause approach, keeping the liver energy free of congestion and in motion is essential in preventing and managing the symptoms that arise. The TCM medicine often prescribed for this, referred to as Free and Easy Wanderer, is also sometimes named Freeing the Moon.1 It moves liver qi stagnation and settles the ethereal soul.

The use of lipotropic factors, including the methyl donors methionine and choline, along with cysteine and cholagogue- and choleretic-acting herbs, allows for optimal metabolic functions and conjugation of hormones.

Useful cholagogue and choleretic herbs include:

Beta vulgaris, Beet leaf, and Raphanus sativa niger, Black radish, are used in some formulations. Some combination of these lipotropic factors can reset the liver and its functions. They can be taken in a low dose daily, or for a more pronounced reset, taken in incremental dosing going low to high over 2 weeks, holding steady at the higher dose for 2 weeks, then incrementally decreasing over 2 weeks. For dosing see table 1. 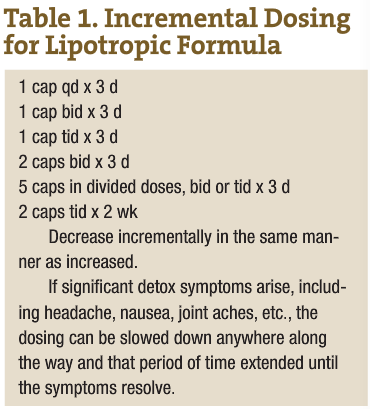 As Edgar Cayce recommended, castor oil packs applied over the liver with heat, daily for 30 minutes, can move liver energy and diminish inflammatory activity. Additionally, the metal stannum (tin) is associated with the liver, and topical application of anthroposophically-prepared stannum cream applied over the liver will increase flow and assist in providing moistening effects to all connective tissue, which is ruled by the liver, as well as to mucous membranes.2

Phytoestrogenic herbs, many high in isoflavones, can be effective in supporting women through the perimenopausal transition. Many of these herbs are found in the Fabaceae family, the pea family, including Trifolium pratense, Red clover, Medicago sativa, Alfalfa, and Glycyrrhiza glabra, Licorice, as well as many beans and legumes that we consume in our daily food – black beans, pinto beans, lentils, fava beans, soy beans, etc.

One Fabaceae family plant that is showing promising research for its isoflavone components of daidzin, daidzein, puerarin, genistin, and genistein is Pueraria mirifica, the kudzu plant.3-5 Although a native from Thailand, it is jokingly said that kudzu is taking over the southeast United States, literally burying buildings.

In one study with perimenopausal women, comparing Pueraria root 50 mg daily dose to conjugated equine estrogen 0.625 mg daily, both groups showed equivocal alleviation of the climacteric symptoms.6 In an earlier study, the vasomotor symptoms were evaluated in perimenopausal women, comparing doses of 50 mg and 100 mg of Pueraria root daily. Women from both dosing groups showed a diminishment of reported symptoms.7

Pueraria mirifica, with its isoflavones, is thought to have actions similar to selective estrogen receptor modulators (SERMs), both estrogenic and anti-estrogenic, as needed to achieve balance in the body.8 A plant like kudzu, that is so proliferative and contains this phytoestrogenic activity, should be strongly considered as part of the therapy for perimenopausal women who are struggling with symptoms that are diminishing their quality of life.

Hot flashes and night sweats can be linked to the transition from Moon energy to Jupiter energy. Although treating the liver can help diminish or abate episodes, other herbal support is often effective. Of course, there is Actea racemosa, Black cohosh, the poster herb for treating menopausal symptoms.

Beyond Actea, the women’s materia medica is abundant. An infusion of Salvia officinalis, Sage, and Mentha spicata or piperita, Spearmint or Peppermint, equal parts 2-4 cups qd, can cool down excess heat. For some women, however, the Sage can be too drying, so be observant of individual needs. A tincture of prepared Rehmannia glutinosa, Chinese foxglove (70 mL), Asparagus officinalis, Shativari in Ayurvedic Medicine (40 mL), and Glycyrrhiza glabra, licorice (10 mL), taken ½ tsp. bid to qid brings moisture and nourishment.

Spritzing as needed with a mixture of filtered water and the essential oils of Clary sage (25 gtt), Rose (25 gtt), and Vetiver (3 gtt) can diminish the frequency and intensity of hot flashes. In anthroposophic medicine, massaging a prepared cream of Cuprum (copper) over the kidneys and adrenal glands acts as a conductor of electromagnetic energy, strengthens the kidney energy, and helps circulate warmth from the core to the extremities.2

An estimated 9 million new osteoporotic fractures were reported in the year 2000. It is projected that 1 in 3 women over the age of 50 will be diagnosed with osteoporosis-related fractures in their lifetime.9,10 Risk factors for the development of osteoporosis include postmenopausal, short stature, slender, fair skinned, blond hair, blue eyes, family history of osteoporosis, and early menopause. Women who miss up to half of their menstrual periods had 12% less vertebral bone mass than did women with normal menstrual cycles. Women who missed more than half had 31% less bone mass.11

Pueraria mirifica has shown to be effective in lowering bone turnover rates in women. In a 24-week trial, women aged 45-60 years old were given 20, 30, or 50 mg doses of P mirifica or placebo. The herb group showed decrease in bone-specific alkaline phosphatase levels compared to placebo.12

One other major contributing factor to osteoporosis is the bone experiencing too little gravitational pull, as experienced in 3 groups where osteoporosis commonly occurs – thin, older white women; astronauts with prolonged travel outside the gravitational field; and those suffering from anorexia or severe weight loss. It requires gravitational pull to direct the calcium into the bone, otherwise, calcium can be placed in soft tissue, leading to arteriosclerosis, catar 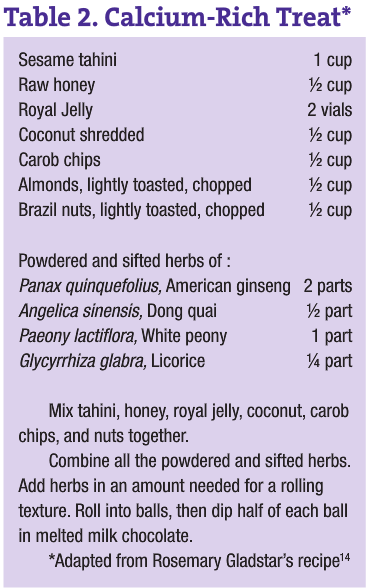 act formation, arthritis, and other problems. Cowan, in his book, The Fourfold Path to Healing,13 describes the case of an older woman who broke both hips simultaneously on a fall. The x-ray showed thin bones devoid of calcium, and the femoral arteries calcified. Due to the lack of gravitational pull in her small, frail body, she was unable to direct the calcium into her bones, and it accumulated in her femoral arteries. This is, of course, where weight-bearing exercise plays an important role.

Food sources of calcium are important, with leafy greens being a primary source. Spinach, beet greens, and chard contain oxalic acid that can bind with calcium, making it less available. Other leafy greens, including kale, collards, parsley, cilantro, dandelion leaf, arugula, watercress, and broccoli, offer more absorbable forms of calcium, which increases in availability with lemon juice or vinegar. Carob, almonds, Brazil nuts, dried figs, apricots, and sunflower, pumpkin, and sesame seeds all contain significant amounts of calcium. Dairy, both cow and goat, can provide some calcium, as can sardines, mostly because of the bones (table 2).

Taking supplemental calcium with magnesium and Vitamin D3 can be part of nutritive, preventative care. Plants contain many minerals, including calcium, which they have taken up from the earth. These are available through eating the plants, or extracting them in water for an extended period of time. Water infusions of mineral-rich plants generally need to steep 8-10 hours for optimal mineral extraction.

A bone-building tea can become a part of daily life for women of all ages, but in particular perimenopausal and menopausal women (table 3). 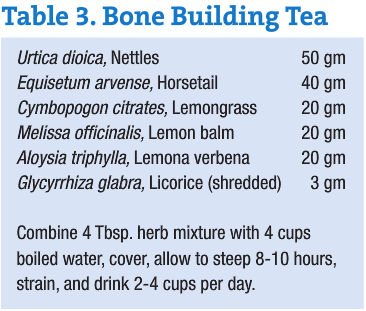 In anthroposophic medicine, there are 2 formulas that stimulate calcium metabolism and help direct calcium into the bones.15

These musings are just a start when considering naturopathic ideas and treatment during the menopausal transition, but hopefully I’ve given you some ideas you can use when supporting these patients.

Robin DiPasquale, ND, RH (AHG) earned her degree in naturopathic medicine from Bastyr University in 1995 where, following graduation she became a member of the didactic and clinical faculty. For the past eight years she has served at Bastyr as department chair of botanical medicine, teaching and administering to both the naturopathic program and the bachelor of science in herbal sciences program. Dr. DiPasquale is a clinical associate professor in the department of biobehavioral nursing and health systems at the University of Washington in the CAM certificate program. She loves plants, is published nationally and internationally, and teaches throughout the U.S. and in Italy on plant medicine. She is an anusara-influenced yoga instructor, teaching the flow of yoga from the heart. She currently has a general naturopathic medical practice in Madison, Wis., and is working with the University of Wisconsin Integrative Medicine Clinic as an ND consultant. 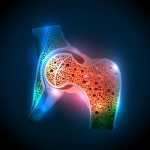 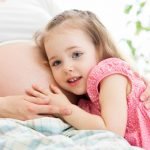