It is estimated that approximately 80% of Americans consume a diet deficient in essential fatty acids (EFAs).1 The balance of fats in the typical North American diet is dramatically out of sync with the needs of our bodies. An insufficiency of fish and fish oils in our diet has led to a decrease in our intake of omega-3 fatty acids by about 80% during the past century. Deficiencies of EFAs, which are so vital to many of the body’s most basic functions, can lead to many health problems for men and women.

When using omega-3 fatty acids from fish oils, it assists the clinician greatly to not only be familiar with the research but also to know the amounts of eicosapentaenoic acid (EPA) and docosahexaenoic acid (DHA) to achieve optimal clinical results. A summary and review of the research in select areas of reproductive and primary healthcare for women will assist the practicing clinician in more specific uses of EPA-DHA from fish oils in the following areas of women’s health: menstrual cramps, osteoporosis, menopause, and pregnancy and fetal development.

Although EFAs have not been talked about much in regard to osteoporosis, it seems evident from the available research that we must expand our use of EFAs to maximize calcium metabolism and to preserve bone health. A growing body of evidence and research warrants advice about EFAs and calcium metabolism, bone health, and the prevention of osteoporosis. Essential fatty acids have been shown to ameliorate calcium absorption from the gut (in part by enhancing the effects of vitamin D), reduce urinary excretion of calcium, increase calcium that is deposited in the bone, and improve the strength of bone.3 Adults with osteoporosis who are given fish oil show an increase in calcium levels and greater urinary calcium clearance.4 Gamma-linolenic acid in particular has been shown to reduce the excretion of calcium5 and inhibit bone reabsorption and markers of bone turnover, while at the same time increasing the levels of calcium content in the bone.6 Using different ratios of evening primrose oil (high in gamma-linolenic acid), fish oil (rich in EPA and DHA), sunflower oil, and flaxseed oil, the results of animal investigations suggest that supplementation with high quantities of evening primrose oil and fish oil is more effective in inhibiting bone loss than linoleic acid and alpha-linolenic acid.7

Two studies have demonstrated that fish oils can reduce the frequency of hot flashes. In the first study,8 women were between 40 and 55 years old and had moderate to severe psychological distress, defined as a score of 72 or higher on the Psychological General Well-being Schedule. Only women with hot flashes were included in the analysis. One hundred twenty women were randomly assigned to ethyl-EPA (E-EPA) omega-3 fatty acid supplementation or to placebo for 8 weeks. The E-EPA supplementation was a 500-mg capsule taken 3 times per day, with each capsule containing EPA (350 mg) and DHA (50 mg). After 8 weeks, the hot flash frequency decreased in the E-EPA group by a mean of 1.58 per day and by only 0.50 per day in the placebo group. There was a significant 55% reduction in the hot flash frequency among the E-EPA group compared with only a 25% decrease in the placebo group. Also, the responder rate was 58.5% in the E-EPA group compared with 34.4% in the placebo group. However, no differences were observed in hot flash severity or in the quality-of-life scores between the 2 groups.

In the second study,9 perimenopausal or postmenopausal women received 2 g/d of fish oil (each gram contained 840 mg of EPA and 375 mg of DHA). This study had the primary objective of evaluating the use of omega-3 fatty acids to treat depressive symptoms among perimenopausal and postmenopausal women with major depressive disorder. The secondary outcome was a change in hot flashes. Using the Montgomery-Asberg Depression Rating Scale, the response (a ≥50% decreased score on the scale) rate to omega-3s was 70%, and the depression remission rate was 45%. Among those women with hot flashes at baseline, the number of hot flashes each day improved significantly, as did the scores on the Hot Flash Related Daily Interference Scale. It was observed that the responders had significantly lower serum DHA levels before treatment compared with the nonresponders.

Essential fatty acids have a unique role during pregnancy because of the rapid development of new cell growth, new tissues, and new organ systems in a developing fetus. Fetal development is associated with a high EFA requirement, and this supply is depe 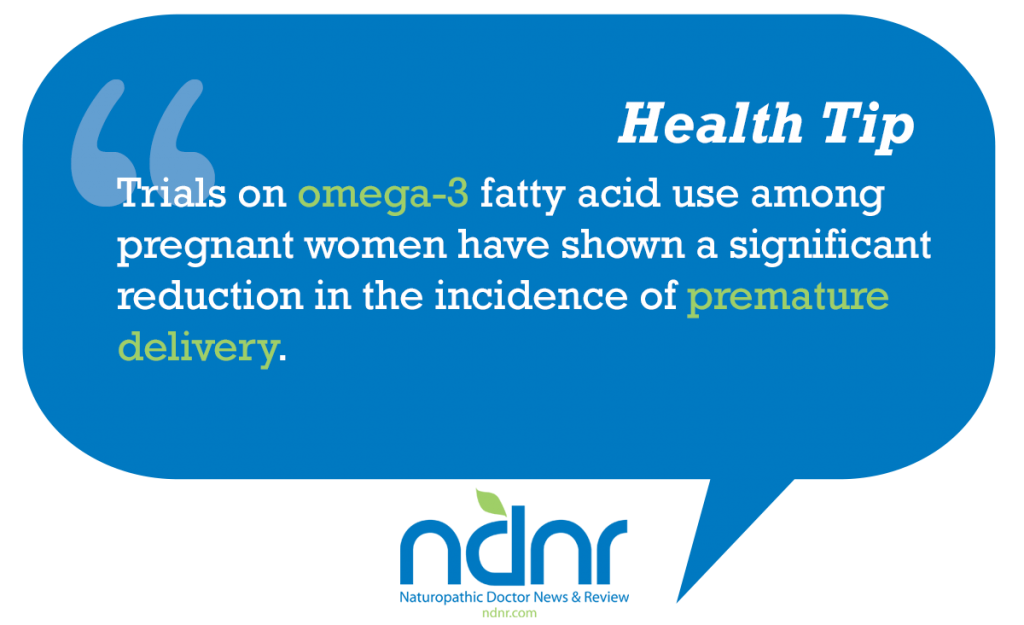 ndent on the amount and availability of EFAs from the mother.

Maternal levels of omega-3 fatty acids, especially DHA, decrease during pregnancy.10 Essential fatty acids are components of breast milk, and maternal levels may be reduced further in women who are nursing. For the fetus, a deficiency in EFAs, particularly EPA and DHA, may lead to a poorly developed central nervous system. An EFA deficiency may be a risk factor for preterm birth and may lead to intrauterine growth retardation (IUGR), resulting in a lower whole body weight and in slower growth of the brain.

Trials on omega-3 fatty acid use among pregnant women have shown a significant reduction in the incidence of premature delivery.11 More than 20 years ago, Olsen et al12 suggested that dietary fats and the type of fats in the diet may influence gestational duration. In islands off the coast of Denmark, women were delivering their infants after 40 weeks of gestation, but a high percentage of women in other parts of Denmark would go into labor about 1 week earlier. The researchers hypothesized that a marine diet with a high intake of omega-3 fatty acids from fish might be responsible for prolonging pregnancy by shifting the prostaglandin balance. In a subsequent clinical trial,13 the same research group investigated a fish oil supplement for its effects on pregnancy duration, birth weight, and birth length. Five hundred thirty-three healthy Danish women were randomized to receive a daily regimen of four 1-g fish oil capsules (containing 2.7 g/d of omega-3 fatty acids), four 1-g olive oil capsules, or no supplementation. The fish oil-supplemented pregnancies lasted 4 days longer than the olive oil-supplemented pregnancies. The pregnancy duration was shortest in the olive oil group, and the birth weight was 107 g greater in the fish oil group compared with the olive oil group. The authors concluded that fish oil supplementation in the third trimester seemed to prolong pregnancy, without any detrimental effects on the growth of the fetus or on the course of the labor.

In another study,15 infants born to mothers who had been given cod liver oil had higher levels of DHA in their umbilical cord and a longer gestation. In a study16 of pregnant women in Iceland, those consuming liquid cod liver oil in the first 15 weeks of pregnancy had infants with higher birth weight.

However, supplementation trials of fish oil have not reduced the risk for PIH or IUGR. In a double-blind trial,18 more than 200 women who were at high risk for PIH or IUGR were randomized to receive 2.7 g/d of fish oil (containing 1.62 g of EPA and 1.08 g of DHA) or to placebo. No difference was observed between the fish oil group and the placebo group and in PIH, birth weight, or gestational duration.

On another note in regard to PIH, a group of pregnant women received a combination of evening primrose oil and fish oil in a placebo-controlled clinical trial.19 Compared with the placebo group, the women receiving the study intervention demonstrated a significantly lower incidence of edema.

It should be noted that vegetarians can have lower intakes of omega-3 fatty acids than omnivores.20 Vegetarian diets in pregnant women are associated with altered fatty acid composition of the umbilical cord blood and phospholipids in cord plasma and can affect the EFA status of the newborn.21 In that study,21 dietary intake and fatty acid composition of plasma phospholipids were evaluated in 24 South Asian vegetarian women and in 24 omnivore nonpregnant women of reproductive age and white race/ethnicity. Umbilical cord blood was collected at delivery from a different group of 48 South Asian vegetarian women and 98 omnivores of white race/ethnicity. Dietary intakes of linoleic acid were higher in the vegetarian women, but EPA and DHA intake was absent. The vegetarians had higher concentrations of linoleic acid and lower concentrations of EPA and DHA in plasma phospholipids, plasma free fatty acids, and total plasma lipids. Among vegetarians, the duration of gestation was 5.6 days shorter, with lower birth weight and smaller head conference and birth length; while infants born to vegetarians had less DHA in their plasma and less umbilical cord artery phospholipids, this did not seem to be independently related to pregnancy outcome.

During pregnancy, maternal EFAs (especially DHA) become progressively depleted.10 Of additional concern is that the DHA remains low postpartum and that in lactating women this influences the infant and may leave the woman at increased risk for postpartum depression.22

The Food and Drug Administration recommends no more than 12 oz of low-mercury fish per week, with no more than 6 oz from albacore tuna because of concerns about mercury content in fish and the potential for adverse effects on the infant.23 Numerous nutrition groups point out that if women focus on the low-mercury fish they should in fact eat a minimum of 12 oz of fish per week to assure an adequate amount of EFAs. Another option to obtain adequate omega-3s without mercury intake is to consume high-quality fish oil supplements from reputable companies with high standards for quality control in which the products are tested for mercury and numerous other contaminants to assure safety.

Dietary sources of good fats are nuts and seeds (such as walnuts, almonds, flaxseeds, and pumpkin, sunflower, or sesame), high-quality vegetable oils (such as olive, canola, flax, and pumpkin oil in our diets), and cold-water fish (such as tuna, salmon, halibut, sardines, mackerel, and herring), in addition to whole grains. Essential fatty acid supplementation provides an important addition to a whole-foods diet and can be particularly beneficial for those who are at higher risk for certain health problems or who have a chronic health problem such as those discussed herein. Supplementation should especially include high-quality fish oils rich in EPA and DHA. Good nutrition clearly goes hand in hand with the consumption of good fats. Most individuals can benefit not only from decreasing the saturated fats and bad fats in their diet but also from increasing the good fats, including daily supplements of omega-3 fatty acids. Using therapeutic doses and concentrations of EPA-DHA is key to achieving success in disease prevention and intervention. 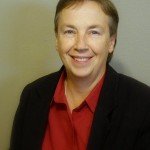 Tori Hudson, ND graduated from the National College of Naturopathic Medicine (NCNM), Portland, Oregon, in 1984 and has served the college in several capacities, including as medical director, associate academic dean, and academic dean. She is currently a clinical professor at NCNM, Southwest College of Naturopathic Medicine (Tempe, Arizona), and Bastyr University (Kenmore, Washington). Dr Hudson has been in practice for 28 years, is the medical director of her clinic (A Woman’s Time) in Portland, and is director of product research and education for VITANICA. Dr Hudson was awarded the 1990 President’s Award from the American Association of Naturopathic Physicians for her research in women’s health, the prestigious Naturopathic Physician of the Year award in 1999, the 2003 NCNM Alumni Pioneer Award, and the 2009 Natural Products Association Pioneer Award. She is a nationally recognized speaker, educator, researcher, clinician, and author (Women’s Encyclopedia of Natural Medicine, second edition, McGraw Hill, 2008). Dr Hudson serves on several editorial boards and advisory panels and is a consultant to the natural products industry. 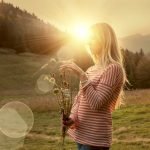 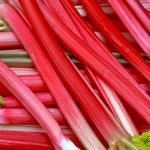