“There exists in all breath the heat of the soul, and so, in a way, all things are full of soul.”1

Bronchiectasis is characterized by the irreversible dilation and damage of airways due to inflammatory destruction and subsequent remodeling of airway walls. The resulting fibrosis, scarring, loss of elasticity, and destruction of cilia then impairs protection of the pulmonary system from dust, bacteria, and excess mucus, and predisposes an individual to chronic respiratory infection. Here we present a case of homeopathic treatment for severe bronchiectasis in a 62-year-old Hispanic female. The patient was diagnosed in 2010 after hospitalization for severe bronchitis, and then presented to our clinic on March 6, 2013, for treatment of cough, anxiety, dyspnea, and constipation.

Although an effortlessly charming and pleasant woman, our first impression of Alexandra was startling. She walked very slowly and exhaustingly into the clinic, intently drawing each breath between each step. Overweight, with a BMI of 28.9, she appeared weak and pale, with a very slight bluish discoloration to her face. With heavy, effortful steps, we proceeded to the treatment room and she sat panting while leaning forward. As she shared her story, complete with a deep despair over her progressive decline, a long list of medications, and a concern for her husband’s skepticism about homeopathic treatment, she spoke in 3 to 5-word sentences, pausing for air frequently or yielding to an expectorating cough.

Auscultation of her lungs revealed a prolonged expiratory phase and loud rhonchi and wheezes throughout all lung fields. Use of accessory muscles was apparent, and deep breathing was exacerbating her cough, causing mild distress. Although she appeared to have the kind of quiet sadness that often accompanies severe exhaustion and chronic disease, she managed to timidly smile occasionally, glance with loving gratitude towards her daughter, and explain her most troublesome symptoms on her own, albeit through broken and breathless sentences. (See Table 1 for record of vitals on initial intake.)

Her difficulty breathing occurred during both inspiration and expiration, and was worse with any exertion (such as doing the dishes or talking) and lying down. She felt a substernal constriction that aggravated her breathing, which was improved with sitting and leaning forward. She had an intense desire to be fanned, as it helped her to breathe more easily; throughout the night she kept a fan only a few inches from her face. She desired eructations, which also would ameliorate her dyspnea temporarily, though she felt unable to pass enough gas to satisfy her desire. Alexandra reported a copious yellow, sour, and metallic-tasting sputum. She perspired on her face and head when she was cold, and she was usually chilly, though her breathing could be aggravated from heat. She experienced ineffectual urging for stool and at times could be constipated for weeks. Her energy was 2/10, and her mild tendencies towards sadness, weepiness, and anxiety were discussed.

Despite extensive pharmaceutical treatments, her symptoms had worsened over the previous 3 years. According to her medical records, during the previous
3 months she had rapidly declined and was maintaining an average oxygen saturation (pulse ox) of only 89%. Of particular interest was her past exposure to fiberglass. The American Lung Association states that “inhaling fiberglass fibers may reduce lung function and cause inflammation in both humans and animals.”2 (See Table 2 for past medical history and exposures.)

It seemed likely that this patient would react positively to the homeopathic medicine Carbo vegetabilis, based on strong characteristic symptoms in her disease presentation combined with concomitant symptoms as repertorized using a homeopathic software program (Figure 1). Confirmatory symptoms included weakened vitality, worse at night and on falling asleep, and her timid and sluggish disposition. Other medicines were considered, but none seemed to be as well-suited for this patent as Carbo vegetabilis. After explaining to the patient some possible outcomes, the patient began a trial of the medicine in a 30C potency, taking 3 pellets TID. In addition, we recommended that she have her vitamin D levels tested, as vitamin D is commonly deficient in patients with bronchiectasis and can correlate with both disease severity and other health risk factors.3 Such a nutritional deficiency could be an obstacle to cure and would likely not be remedied through homeopathic treatment.

Alexandra’s first follow-up visit was 9 days after starting the remedy. She greeted us in the waiting room with a smile as though she had a secret that she couldn’t wait to tell. “I’m better,” she announced. She reported improvements in breathing, chilliness, anxiety, face discoloration, constipation, fatigue, and overall well-being. Her husband had even elected to accompany his wife and daughter to this appointment, as his skepticism regarding homeopathy had been put into question. Alexandra appeared less pale but with a similar expectorating cough and shortness of breath. Auscultation revealed loud rhonchi and a prolonged expiratory phase. However, her pulse ox was increased to 93% (Table 2). Based on the patient’s report and the improvement in observable signs, it seemed likely that she reacted positively to the remedy and was continuing to respond. However, since she also started taking the supplements her daughter recommended just before starting the remedy, this determination became slightly more difficult. Since there were no apparent new symptoms and the patient had improved, we recommended that she continue taking Carbo vegetabilis 30C TID and to call if she noticed a worsening in her symptoms.

Her next follow-up did not occur until 1 ½ months later, due to financial and travel challenges. She returned to the clinic as, according to her, “a new woman.” The stark improvement, from a previously laborious gait and breathless conversation, to an able, almost energetic enthusiasm in each step and word, was impressive enough to take away the breath of our attending physician and student clinicians. She was able to walk to the treatment room without shortness-of-breath or cough, and was speaking in full sentences. She readily made jokes, teased her husband, and laughed. This was particularly heart-warming, as she hadn’t been able to draw enough breath to laugh in months. Her cheeks were pink, her eyes were bright and her husband commented several times on the significant improvement in both her respiratory symptoms and her mental/emotional state. It was as though the spark in her eyes had been reignited, as though we were meeting her, the real her, for the first time.

Three weeks before this appointment, her pulmonologist had reduced her daily prednisone dosage from 20 mg to 10 mg, given her progress. Her symptoms of dyspnea, expectoration, constipation, cough, chill, and anxiety had all either improved or resolved. Wheezes, rhonchi, and crackles were markedly reduced, and her respirations were more normal at 12 breaths per minute (compared to 28 at her initial intake). Her pulse ox was maintained at 92% (93% previous visit). The prescription was refilled. We also encouraged her to discuss obtaining a DEXA scan through her primary care physician, given her age and significant history of prednisone use.

Less than 1 month later she called to report a worsening of some symptoms and we recommended she change to a 200C potency of the same remedy, as she had no new symptoms and the case was still well-covered by it. At her follow-up in June (third in-office follow-up), she returned to the clinic without signs of dyspnea or distress. Constipation and sweating on her face were completely resolved. Auscultation of anterior and posterior lung fields revealed only quiet wheezes (severely reduced from her initial exam) and a few moderate rhonchi. Her pulse ox was 94%.

Although she continued to maintain her progress, on July 6 it appeared that improvement had plateaued, so the remedy potency was increased to 1M via phone consult. By August, her pulse ox had increased to 95%. Her symptoms continued to improve through the summer months, and her pulmonologist discontinued omalizumab. Her use of nebulized albuterol was significantly reduced. Presently, Alexandra continues to maintain her improved respiratory status and homeopathic treatment.

Carbo vegetabilis, an inert carbon compound also known as charcoal, is made from the ashes of plant burnings. Homeopathically, it is indicated when the patient is experiencing symptoms characteristic of imperfect oxidation.

Conventionally, most cases of severe bronchiectasis will require some combination of long-term therapies. These may include, but are not limited to, antibiotics, chest therapy, bronchodilators, corticosteroids, oxygen, and hospital admission and surgery for severe exacerbations. Such treatments may be expensive, time-consuming, and result in adverse reactions such drug side effects. Despite the understanding that severe bronchiectasis is characterized by irreversible damage to the bronchial tissue and that it is regarded as an incurable disease state, we observed that homeopathy was a safe and effective alternative therapy for this patient. In other words, even in the case of potential end-organ damage, improvement was initiated.

While homeopathic treatment appears to have markedly restored aspects of pulmonary function, as evidenced through improved physical exam findings and pulse ox readings, this case exemplifies the effect that homeopathy may have on the whole person. Hahnemann clearly states that “the psychic condition of the patient and his general demeanor are the most certain and revealing… that improvement is indicated by a sense of greater ease, composure, mental freedom, higher spirits and returning naturalness.”4 Although the prescription was largely based on characteristic physical symptoms rather than mental/emotional peculiarities, significant improvement was seen in both aspects of health. Alexandra’s clinical respiratory symptoms improved, but she also embodied this sense of “greater ease” and “return to naturalness.” Her playful, humorous, and sweet disposition increased alongside her improved oxygenation status. This reminds us that we prescribe because of symptoms, rather than for symptoms, that what we are treating is the vital force and, therefore, the whole person. Symptoms merely reflect the untunement of the vital force; when the vital force is attuned, the patient should improve as a whole.

The corollary to this notion is seen in the scientific approach to identifying the most individualizing and characteristic set of symptoms and then prescribing a homeopathic preparation of a substance proven to induce those symptoms. However, what was most impressive in this case was not in the prescription, but in the power of the vis medicatrix naturae. It was striking to observe Alexandra’s progressively increasing strength with every office visit. This case highlights the incredible potential of homeopathy as a healing art and the awe-inspiring ability of the vis to retune the vital force and allow the whole person to heal. Over the course of only a few short months, it was as if Alexandra had come alive again, regaining both functionality and improved quality of life… And isn’t that what our medicine is truly about? 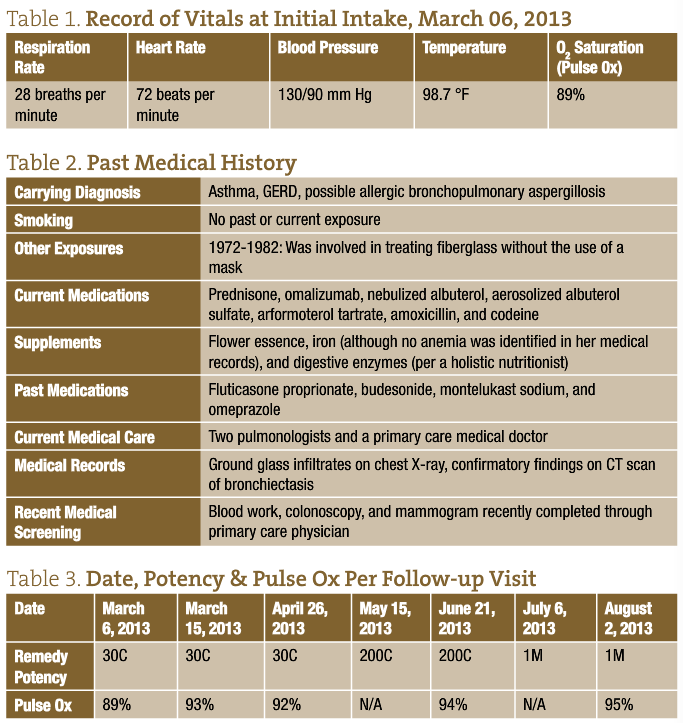 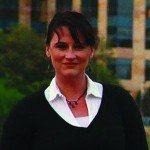 Jonci Jensen, ND, is an assistant professor at Bastyr University in San Diego, California, where she currently teaches homeopathy, naturopathic medical philosophy and clinical skills. She completed the specialized Standard Homeopathic-funded Residency at Southwest College of Naturopathic Medicine, where she also received her naturopathic medical doctorate. Prior to this, she built a successful practice in Austin, Texas. 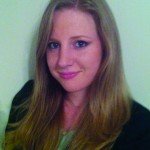 Jessica Moore, ND, graduated as a naturopathic doctor in 2013 from the Southwest College of Naturopathic Medicine. She holds a bachelor of kinesiology degree from the University of Calgary and has recently accepted a position as a 1st-year resident with Cancer Treatment Centers of America. She has participated in clinical research on COPD as well as bench top investigations on immunomodulatory activity of botanical medicines. 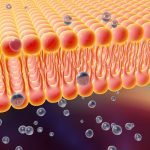 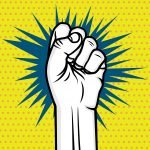 Personalized Medicine How SNPs, Ox Stress, and Inflammation Are Creating a Revolution in HealthcareCardiopulmonary Medicine