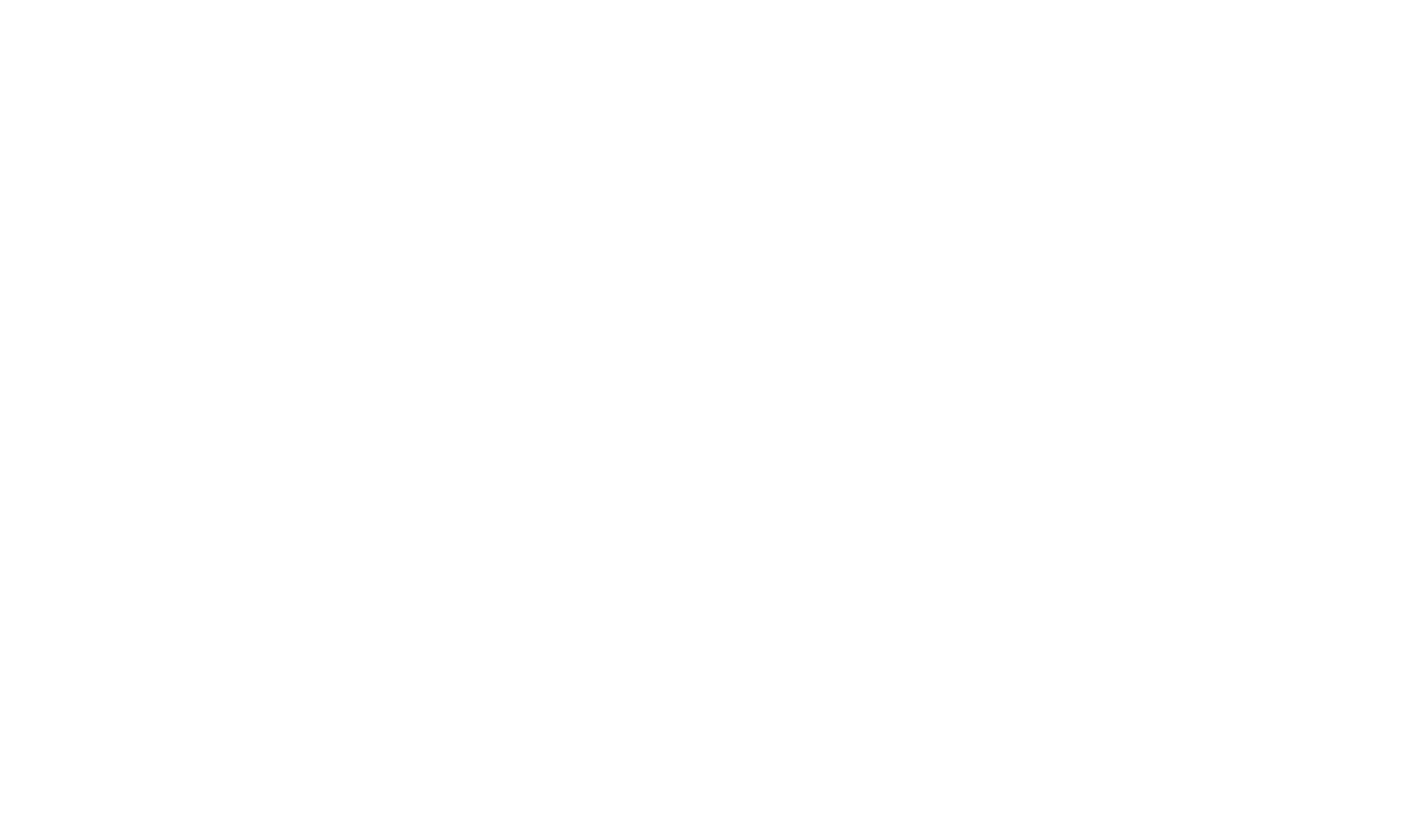 Osteoporosis is defined as a “systemic skeletal disease characterized by low bone mass and microarchitectural deterioration of bone tissue, with a consequent increase in bone fragility and susceptibility to fracture” (Consensus Development Conference, 1993). The 1994 World Health Organization (WHO) study group classified patients according to bone mineral density (BMD) values. The general diagnostic categories are as follows:

In 2003, The National Osteoporosis Foundation estimated that 44 million Americans, 55% of people 50 years of age and older, face the risk of osteoporosis. Ten million, 80% of which are female, are estimated to have the disease. The other 34 million have low bone mass, and already are at an increased risk for osteoporosis.

The purpose of this article is to help NDs understand the role of some therapeutic substances in metabolic processes, including – at least in part – the mechanisms of those processes. 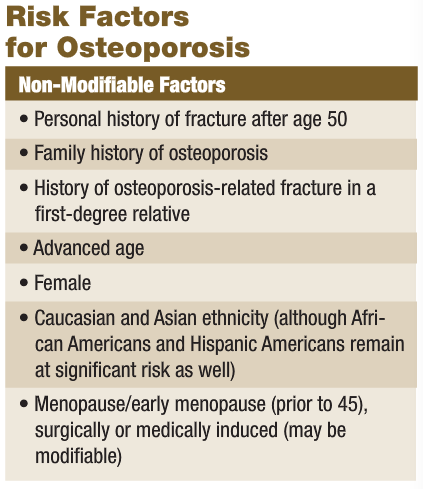 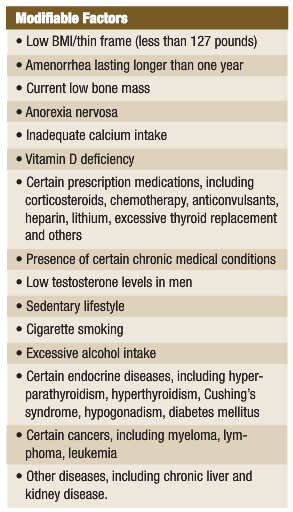 Calcium 1000-1500mg Calcium is a well-established essential nutrient for prevention of osteoporosis. Daily recommendations include 1000mg for adult women, and 1500mg for women older than 50 years as well as pregnant and lactating women.

Vitamin D 400-800IU and Boron 3mg Vitamin D increases intestinal absorption of calcium. Particularly in northern latitudes, there is a significant increase in bone turnover during winter months, presumably as a function of the quality of available sunlight and time spent outdoors. One two-year, open-label study showed that oral supplementation of 500IU daily of vitamin D3 and 500mg of calcium prevented seasonal changes in bone turnover and bone loss. The study suggests that annually recurring cycles of low vitamin D during the winter months contributes to age-related bone loss (Meier et al., 2004).

Boron plays a role in increasing serum 25-hydroxyvitamin D, it is suggested, via suppression of 24-hydroxylase, which breaks down 25-hydroxyvitamin D. The mechanism is not well understood. Either boron blocks the enzyme directly or via the covalent bonding of boron with 24,25-dihydroxyvitamin D, the product of the 24-hydroxylase interaction. Clinical studies have shown that boron works in a similar manner of inhibiting microsomal enzymes that catabolize estradiol. The result is the up-regulation of 17 beta-estradiol levels in women, regardless of hormone replacement status (Miljkovic et al., 2004).

DHEA 5-50mg and Magnesium 400-800mg Dehydroepiandrosterone (DHEA) gradually decreases with age, and is involved in osteoblastic and osteoclastic activity. DHEA has been found to improve the viability of osteoblasts and inhibit osteoclastic activity by increasing the ratio of osteoprotegerin (OPG)/receptor activator of NF-kappaB ligand (RANKL) mRNA in osteoblasts (Wang et al., 2006). Half of the body’s magnesium volume is found in bone. One study demonstrated for the first time that magnesium deficiency in animal models created a decrease in the OPG/RANKL, which increased osteoclast numbers and produced a subsequent decrease in bone mass (Rude, 2005). Thus, not only is magnesium required as substrate for mineralization of the bone matrix, it is also a cofactor in bone remodeling.

Zinc 25mg qd or Zinc carnosine 75-150mg qd and Copper 1.5-3.0mg qd Zinc activates synthase enzymes in osteoblasts, is involved in production of cellular protein and plays a role in inhibiting bone resorption. Zinc carnosine (75-150mg daily) has a more intensive stimulatory effect on bone formation than that of zinc sulfate (Yamaguchi, 1998). Lysyl oxidase requires copper to form peptidyl aldehydes that are necessary for the cross-linkage of collagen and elastin. In copper deficiency, protein synthesis is blocked and cross-linking cannot occur (Harris et al., 1980). It is important to note that calcium supplementation may inhibit absorption of zinc and retention of copper when ingested simultaneously (Lowe et al., 2002). Also, use caution in supplementing zinc or copper: High zinc intake can cause a copper deficiency, and vice versa. The ideal zinc to copper ratio is 8:1.

Ipriflavone 200mg TID Ipriflavone (IP) (7-isopropoxyisoflavone), a synthetic soy isoflavone derivative of daidzein, is active in both inhibiting bone resorption and enhancing osteoblast function, and thus increases bone density and decreases fractures in women with osteoporosis (Valente, 1994; Head, 1999). There is conflicting evidence on ipriflavone’s efficacy, and it is known to cause reversible subclinical lymphocytopenia in some people and gastrointestinal adverse reactions (Alexandersen et al., 2001; Agnusdei et al., 1997) Note that one study showed no difference in bone mineral density between the treatment and control groups supplemented with 500mg of calcium in both groups (Alexandersen et al., 2001). Another study, which supplemented with 1000mg of calcium and the same dose of ipriflavone (200mg TID), showed no decrease in bone mineral density in the treatment group, whereas the control group showed a significant decrease in bone mineral density over two years (Agnusdei et al., 1997; Gennari et al., 1997).

For patients without underlying conditions requiring higher protein diets, recommend a diet low in animal protein and high in plant-based proteins from a wide variety of legumes and whole grains. High-protein diets deplete calcium due to the diuretic action of excess urea, as urea is formed from nitrogenous waste of protein breakdown. Patients should avoid soft drink consumption, as the high levels of phosphates/phosphoric acid found in carbonated drinks increase the overall acidity in the body, and the bones sacrifice calcium and other minerals to buffer the acid.

These patients should also include soy, dark leafy greens, legumes, nuts and seeds for phytoestrogen content, protein and high-quality fats; as well as plant-based oils and fish for a low acid-diet; and calcium-fortified foods.

Rebecka Hoppins Campbell, ND is a 2005 graduate of Bastyr University. She started Seattle Naturopathic Clinic in Lynnwood, Wash., with an annex in Ballard. Her practice focus currently is in family medicine, allergies and women’s health. Dr. Hoppins’ personal interests include travel, reading, music and swing dancing. She has lived in the Seattle area for 12 years, and currently resides near downtown with her husband and two shih tzu. 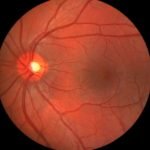 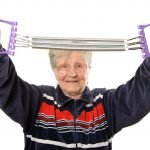 Exercise for the Aging SetAnti-Aging, Geriatrics