The study, which was published on April 12th in the journal Aging, was a randomized, controlled trial (RCT) investigating the ability of an 8-week combined intervention of healthy diet and lifestyle measures (sleep, exercise, and relaxation) and a basic supplement regimen (fruit and vegetable powder and a probiotic) to reverse biological age. The study showed that in as little as 8 weeks, a 3-year decrease in biological age was achieved.

While the study was independently conducted by the Helfgott Research Institute, Yale University Center provided genome analysis, and the results were independently analyzed at McGill University and the National University of Natural Medicine.

Why This Study is Unprecedented

Age-associated decline in health is recognized as the most significant risk factor for chronic conditions such as cardiovascular disease, stroke, type 2 diabetes, and Alzheimer’s disease.2 Incidence of chronic diseases of aging has been steadily increasing for several decades. Naturopathic doctors are well aware that this phenomenon is multifactorial, not just due to the fact that people are living longer. At the same time, Baby Boomers (73 million in the United States) are rapidly moving into old age; by 2030, all of them will be over the age of 65.3 This places a tremendous burden on the healthcare system and associated costs. The study’s lead author, Kara Fitzgerald, ND, IFMCP, referring to another recent study,4 commented that if we can slow down aging by a single year  (with associated extension of lifespan), we can save the United States $38 trillion, and $367 trillion by 10 years. “The potential economic impact is staggering.”

The notion that healthy diet and lifestyle not only support healthy aging, but are essential to it, is nothing new to naturopathic doctors; their personal experience with patients bears that out on a daily basis. However, illuminating mechanisms behind both impairments and improvements serves to broaden our understanding, and well-conducted studies can only encourage more widespread acceptance and consideration of solutions to chronic disease that are so desperately needed. For these reasons, this new study is particularly noteworthy.

Study participants included 43 apparently healthy men, ages 50-72, who were divided into a treatment group (n=18) and a control group (n=20). Following a 3-week washout period (other than multi-vitamins and any low-dose nutraceuticals they were already taking for prevention), participants in the treatment group were given dietary instructions, 2 supplements, each very basic, a sleep recommendation, a modest exercise program, and a breathing exercise for stress reduction. Control-group participants made no changes.

Although the intervention diet was plant-centered, it was low in carbohydrates and included a limited amount of nutrient-dense animal proteins, such as egg and liver. Mild intermittent fasting was incorporated to further lower glycemic cycling.

Supplements included a probiotic (Lactobacillus plantarum) and a proprietary powdered combination of organic vegetables, fruits, seeds, herbs, plant enzymes, and pre- and probiotics. Both the powder and the probiotic were taken twice daily.

Exercise recommendations included a minimum of 30 minutes per day, at least 5 days per week, at 60-80% of maximum perceived exertion.

Individuals in the treatment group were also taught a relaxation breathing technique that they were instructed to use twice daily. Additionally, they were encouraged to get at least 7 hours of sleep each night.

This study was based on the hypothesis that aberrations in DNA methylation capacity are a major driver of aging (and associated chronic diseases) and that slowing such losses should therefore result in a healthier, more “youthful” metabolism.

DNA methylation is the addition of a methyl group to cytosine residues on particular areas of a chromosome (eg, CpG islands). While there are more than 20 million methylation sites on the human genome, methylation levels that correlate with age occur at only a few thousand of these sites.1

Hypo- and hypermethylation can both play a role in impaired health in aging. Thus, the therapeutic target was not simply a net increase in methylation, but rather restoration of healthy methylation patterns.

Notably, in both groups “there was no net increase or decrease in methylation of the 353 sites that compose the Horvath clock.” This suggests that the intervention, rather than leading to an overall increase in methylation, tended to normalize methylation patterns in a way that was consistent with younger biological age.1

In the treatment group, mean triglycerides decreased 25% over the 8-week program (p=0.009), and mean 5-methylenetetrahydrofolate (5-MTHF) increased 15% (p=0.004) – an unsurprising finding given their folate-rich diet. No other blood markers significantly differed between groups, although among treatment-group participants, total- and LDL-cholesterol significantly decreased (p=0.004 and 0.01, respectively).1

This was not the first study to examine the effects of therapeutic interventions on biological age. However, it was the first RCT to utilize a diet- and lifestyle-based therapeutic approach and to achieve such dramatic results in such a truncated timeline.

One small pilot study looked at DNAmAge over the course of 12 months in healthy men who were administered  a combination of growth hormone, metformin, DHEA, and 2 dietary supplements.6 By the end of the 12-month study period, epigenetic age had decreased by 1.5 years compared to baseline measurements.

In another year-long pilot study, elderly Polish and Italian men and women ate a Mediterranean diet and took 400 IU per day of vitamin D3.7 By the end of the study period, all participants showed favorable changes in DNA methylation, and the Polish women’s epigenetic age had decreased by 1.47 years compared to baseline.

In a study conducted over 16 weeks, overweight and obese African Americans with suboptimal vitamin D status took 400 IU per day of vitamin D3.8 DNAmAge clock measurements showed that, compared to the placebo group, epigenetic age in the treatment group had decreased by 1.85 years.

Although these studies delivered favorable results, reductions in biological age ranged from only 1.47 to 1.85 years, and the studies were conducted for 12 months or longer.

The current study, in contrast, demonstrated that by using a comprehensive approach to diet and lifestyle that contained elements well known to positively impact health (and specifically methylation), a substantial reduction in biological age of more than 3 years can be seen in as little as 8 weeks. As Dr Fitzgerald remarked, “Notably, the shorter timeframe of this study and the scale of potential reduction, while modest in magnitude, may correlate with meaningful socioeconomic benefits, and appears to have the potentially to be broadly achievable.”

We suspect that this focus was the reason for its remarkable impact. These early results appear to be consistent with, and greatly extend, the very few existing studies that have so far examined the potential for biological age reversal. And it is unique in its use of a safe, non-pharmaceutical dietary and lifestyle program, control group, and the extent of the age reduction.1

“What is extremely exciting,” commented Dr Fitzgerald in a EurekAlert press release forwarded to me, “is that food and lifestyle practices, including specific nutrients and food compounds known to selectively alter DNA methylation, are able to have an impact on those DNA methylation patterns we know predict aging and age-related disease. I believe that this, together with new possibilities for us all to measure and track our DNA methylation age, will provide significant new opportunities for both scientists and consumers.”

The group of investigators is currently enrolling participants in a larger study, with the expectation of corroborating these exciting findings. For more information, visit https://join.youngeryouprogram.com or contact Dr Fitzgerald at www.drkarafitzgerald.com. 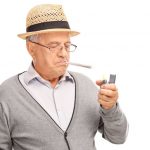