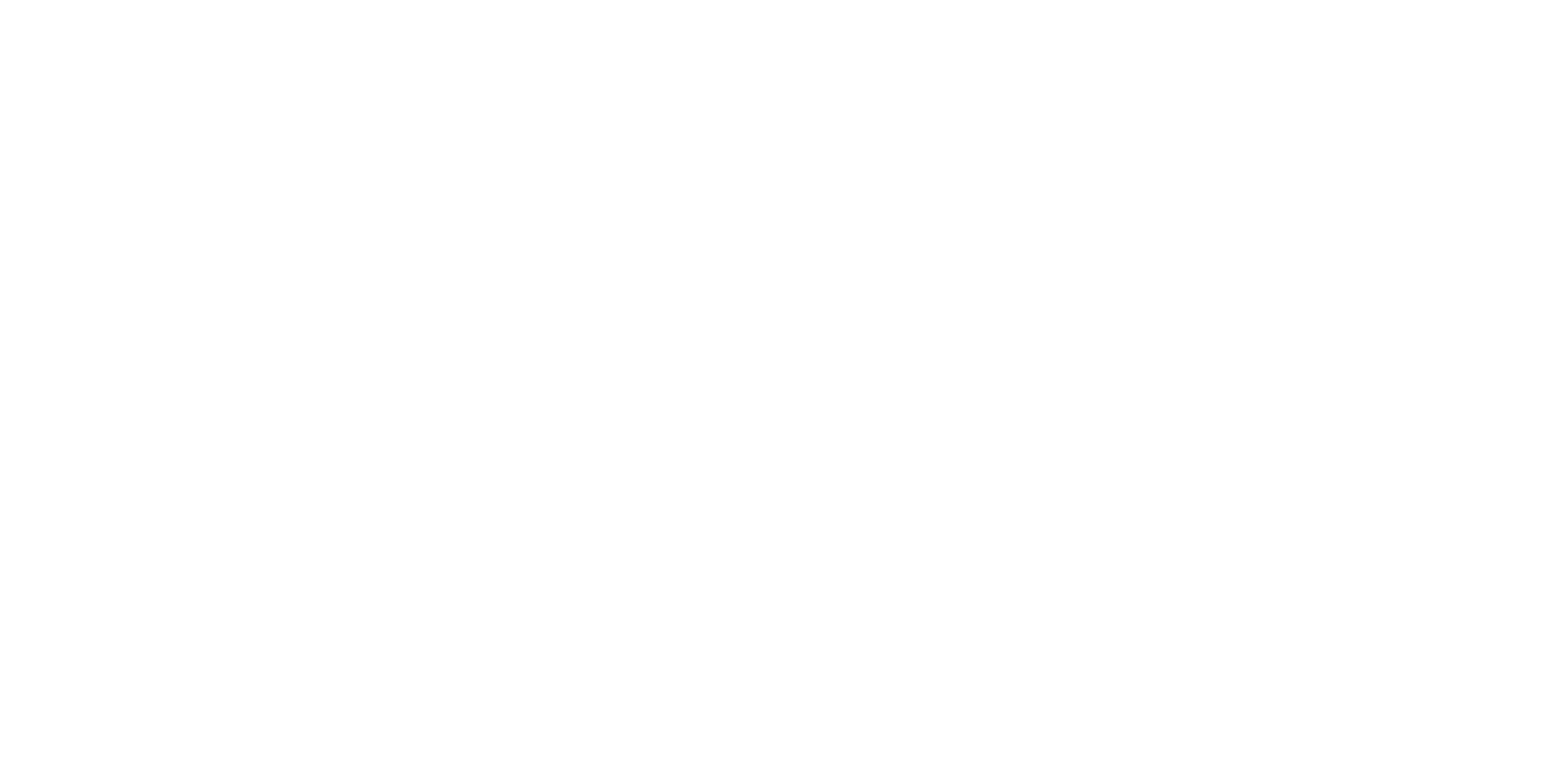 Many aspects of human physiology are influenced by levels of steroid sex hormones, and the immune system is no exception. A thorough evaluation and understanding of an autoimmune patient’s native hormone metabolism may provide insight and therapeutic options. Hormone effects are dimorphic; that is, the effect of a hormone varies based on the gender of the individual.1 This dimorphic nature of human immune responses predispose women toward autoimmune disorders and men toward cancer.2 Women, for example, tend to have enhanced antibody production, better resistance to infection, and are less susceptible to viral infections compared to men.2 The reason for these effects may be evolutionary: the female may require a stronger immune system to protect and bear offspring and to “program” the immunity of the next generation.

Men, on the other hand, may be partially protected from autoimmune conditions due to their higher levels of androgens. Dehydroepiandrosterone (DHEA), testosterone, and dihydrotestosterone (DHT) tend to confer immunosuppressive qualities and have been shown to downregulate immune responses in both autoimmune patients and controls.3 Progesterone is usually considered immunosuppressive; however, several studies indicate that the effects of progesterone on some immune cells, such as dendritic cells, may be complicated by prior hormone exposures.4 It is the estrogens, due to their bimodal effects, that may have the most varied impact on autoimmune disorders. In fact, an estrogen metabolite has recently been found to be associated with some autoimmune conditions.5

The effects of the estrogen, 17β-estradiol (E2), on the immune system are bimodal; cellular response is different when E2 levels are too low (proinflammatory) vs when they are too high.6 Estradiol downregulates the genetic expression of the autoimmune regulator protein, which likely contributes to the higher predominance of autoimmune conditions in women, and E2 also upregulates DNA methyltransferase-3b to further alter epigenetic programming.3 Estrogen regulation of the immune system determines the number, differentiation, and function of peripheral neutrophils, T-cells, B-cells, macrophages, and nervous system microglia. Within the immune cells, estrogens (primarily E2) regulate the genes that control the immune responses, including the expression of tumor necrosis factor-alpha (TNFα), interleukins, interferon-gamma (IFNγ) B-cell immunoglobulins, and other cytokines.7

Estrogen effects may be a direct response to the binding of estrogen (or another ligand) to one of the 2 estrogen receptors, ERα or ERβ. Post-translational modifications (phosphorylation, glycosylation, acetylation, nitrosylation, etc) of estrogen receptors results in ligand-independent, or indirect, signaling. A variety of local factors, including differential distribution of the 2 ER receptors in cells and tissues, inherited variations in the receptors, and the local tissue profile (inflammatory vs tolerant) may all influence estrogen receptor signaling. ERα is expressed by most of the cells in the immune system, whereas ERβ is variably expressed by most immune cells. B-cells express more ERβ, while T-lymphocytes express more ERα.7

The balance of signals received by developing immune cells through their androgen, progesterone, and estrogen receptors determines, in part, the populations of various T-cell subtypes, including T-regulatory cells (T-regs), Th1 lymphocytes, Th2 lymphocytes, and Th17 lymphocytes.1 Th1 cells produce IFNγ, interleukin (IL)-2 and TNFβ, and promote cell-mediated immunity and phagocyte-dependent inflammation. Th2 cells produce IL-4, IL-5, IL-6, IL-9, IL-10, and IL-13; in so doing, they evoke strong antibody responses (including IgE) and eosinophil accumulation.8 Different autoimmune conditions have comparatively increased populations of dysregulated Th1 or Th2 cells, with or without elevated Th17 cells. In some autoimmune conditions, such as rheumatoid arthritis (RA), the immune cells in synovial tissues may change over the course of 2 years, evolving from a Th2-dominant profile to a Th1-dominant profile.9

While knowing the status of a patient’s immune profile is essential for the provision of good patient care, it may be just as necessary to evaluate the patient’s native hormone metabolism and to monitor the patient during any hormone therapy intervention. Recent evidence of metabolic disruptions in steroid hormone metabolism, due to inflammation and disease processes, can often be inferred from a urine hormone analysis.10 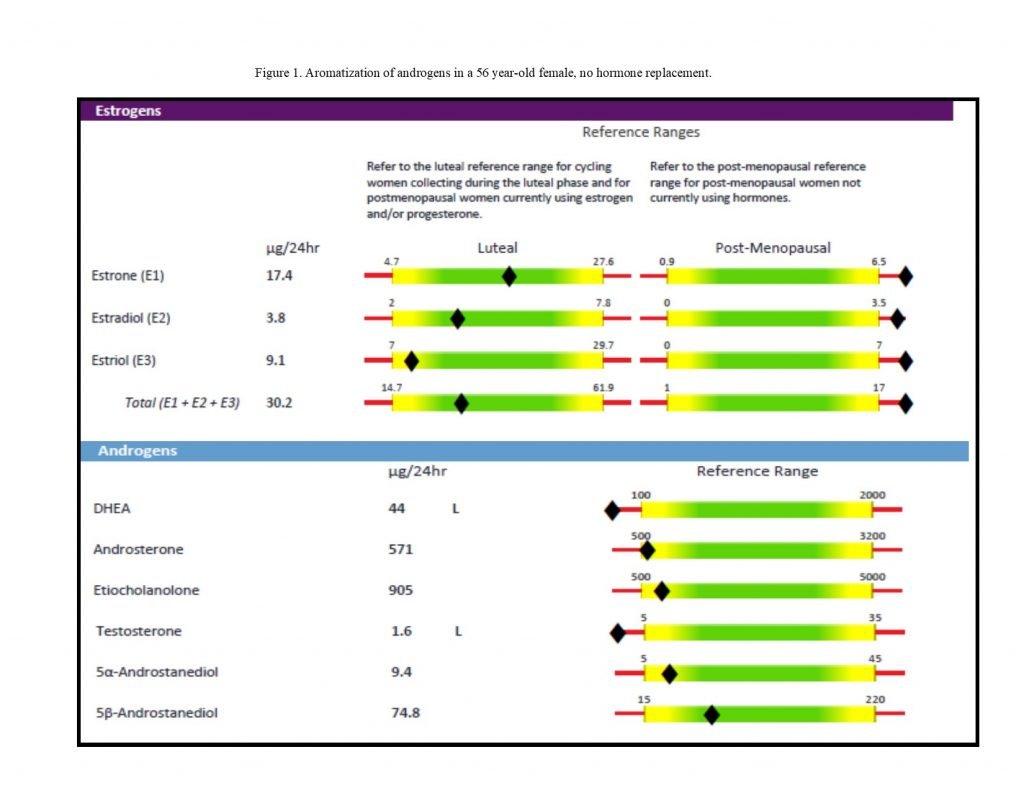 A common presenting pattern in autoimmune individuals can be seen in Figure 1.5 The androgen levels, particularly that of DHEA, are lower than expected, and the estrogens are higher by comparison. Although the effects of estrogen and other hormones on immune activity are complex and variable, much of the available evidence suggests that estrogens mostly stimulate Th2 and inhibit Th1.11,12 Androgens are converted into estrogens by the aromatase enzyme (see Figure 2). Current evidence indicates that peripheral aromatase activity may be increased by inflammatory cytokines, such as TNFα and IL-6. Excess estrogen from aromatization may exacerbate symptoms and inflammation in patients with Th2-predominant autoimmune conditions.12 Estrogen-progesterone replacement therapies may be used in patients with RA and systemic lupus erythematosus (SLE) patients, but should be low-dose and carefully balanced in SLE patients to prevent flare-ups.1 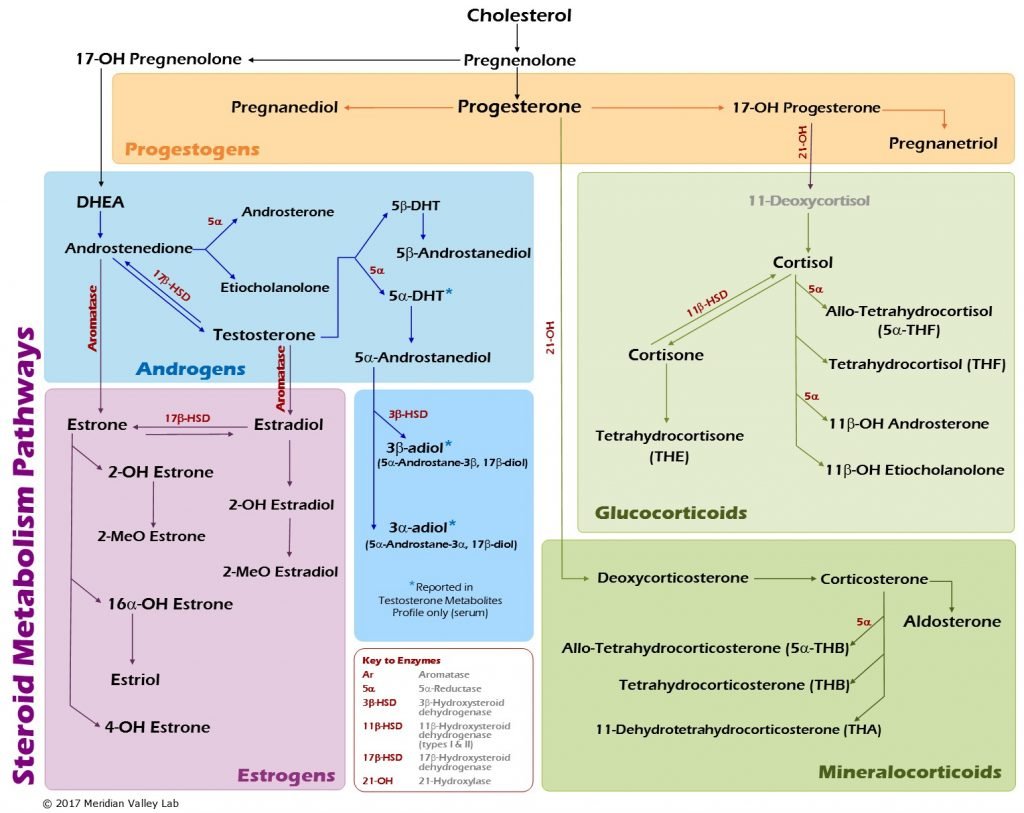 The evaluation of estrogen metabolites may be particularly important for patients with certain autoimmune conditions, such as RA and SLE.5 The 16α-hydroxyestrogens bind estrogen receptors tightly and the binding does not permit downregulation of the receptor; this gives the 16α-metabolites estradiol-like effects (Figure 3).13 Both RA and SLE patients may present with low urinary 2-hydroxyestrogens and an increased 2:16α-hydroxyestrogen ratio.14 Multiple strategies may be used to positively shift this ratio, and evaluations may be done pre- and post-intervention to document progress: 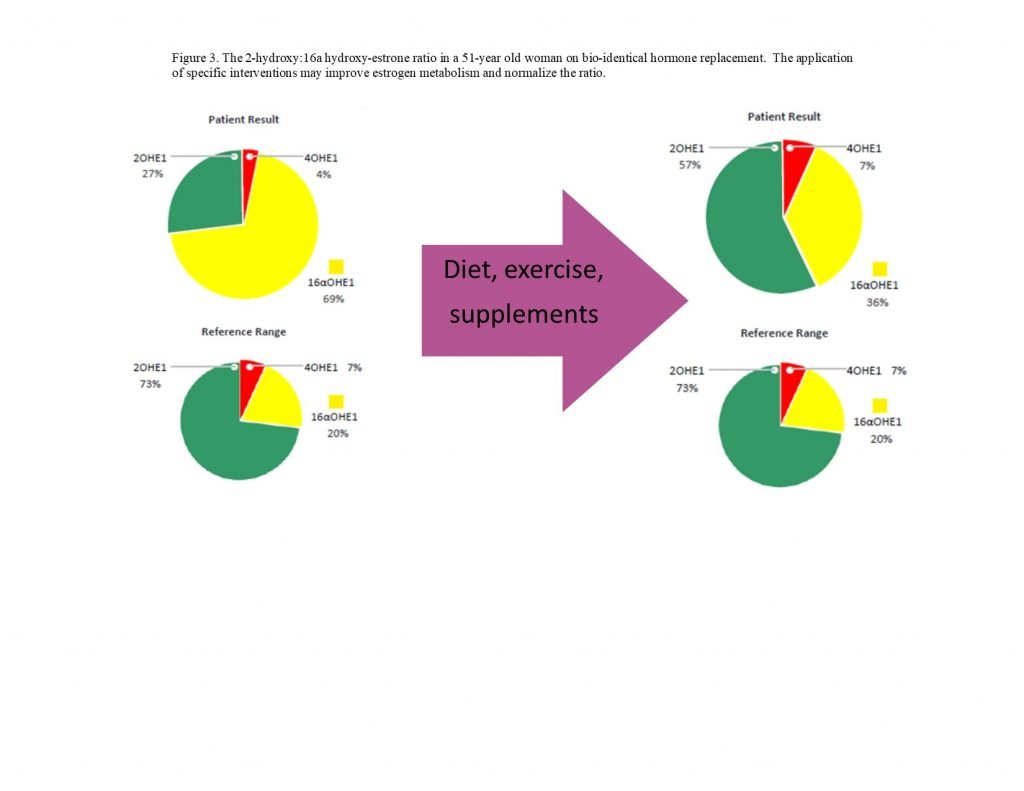 (Ratio of 2-hydroxy:16α-hydroxyestrone in a 51-year-old woman on hormone replacement. The application of specific interventions may improve estrogen metabolism and normalize this ratio.)

Evaluating 4-hydroxyestrogen levels can also provide valuable clinical information, as higher levels of 4-hydroxyestrogens may be converted into quinone molecules that can directly damage DNA and/or increase oxidative stress.22 Reducing the risks associated with 4-hydroxyestrogens involves supporting detoxification methyltransferase enzymes with magnesium and vitamin B6, supporting glutathione enzymes with selenium, and providing additional antioxidants, such as resveratrol and N-acetylcysteine.22,23

For patients with Th1-dominant autoimmune disorders, lower levels of estrogens and androgens (Figure 4) may exacerbate inflammation and contribute to disease progression. There is some evidence, for example, that in women with multiple sclerosis (MS), follicular estradiol is lower in cycling women,24 and that MS worsens after menopause in many women.25 Certain autoimmune conditions often improve during pregnancy when estrogen levels are higher, such as MS, thyroiditis, rheumatoid arthritis, uveitis, and psoriasis.26 Increasing the level of estrogens, particularly via estriol supplementation, may have anti-inflammatory and neuroprotective effects in Th1-dominant autoimmune conditions such as MS.26 A deficiency in iodine and/or selenium has been shown to decrease cytochrome P450 enzyme activity; iodine, in particular, is required by cytochrome P450 3A4 in the local conversion of 16a metabolites into estriol.23,27,28 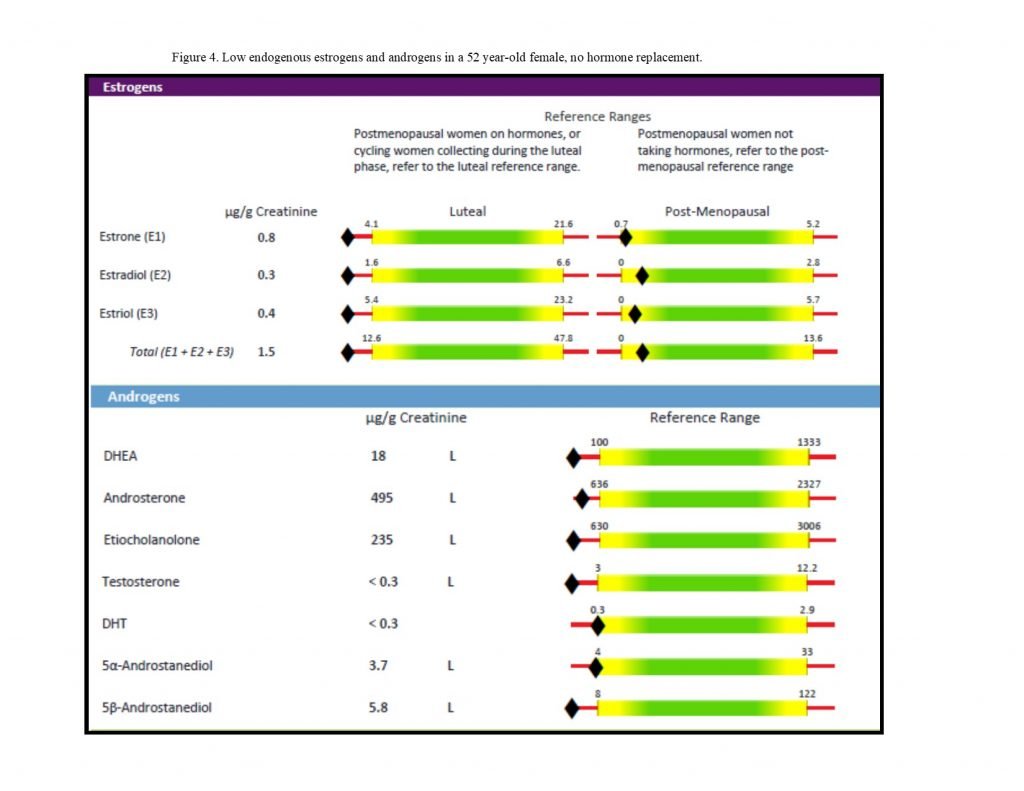 The correction of low hormone levels in mature patients, ie, post-menopause or post-andropause, is fairly straightforward. Human trials have begun in which female MS patients are administered doses of estriol (E3) and progesterone that mimic the third trimester of pregnancy, with the goal of inducing a shift from Th1- to Th2-dominant immunity.26 However, in younger patients, particularly cycling women with regular menses, supplementation with estradiol may be contraindicated due to increased cancer risks; thus, longer-term human trials are needed to fully assess the safety of high-dose estriol. Meanwhile, the daily provision of certain nutrients may improve endogenous sex and glucocorticoid hormone production in younger, cycling patients:

These nutritional interventions may promote not only primary, but also local (intracrine), synthesis in tissues such as the central nervous system, bones, lungs, skin, and gastrointestinal systems. Intracrine synthesis is essential after menopause, and improving estrogen metabolism may provide further benefits for any patient suffering from localized or systemic inflammation.35 Because so many aspects of human physiology, including the immune system, are influenced by levels of steroid sex hormones, a thorough evaluation and understanding of an autoimmune patient’s native hormone metabolism may provide additional insight and therapeutic opportunities to restore health. 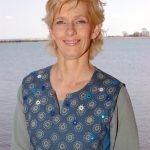 Andrea Gruszecki, ND, received her doctorate in Naturopathy from Southwest College of Naturopathic Medicine in 2000. Trained as a radiologic technologist and Army medic, she spent the years prior to graduation working in urgent care and hospital settings, gaining valuable clinical experience. Dr Gruszecki is a member of the Consulting Department at Meridian Valley Laboratory, where she provides interpretive assistance with laboratory results, writes interpretations, and creates conference presentations. 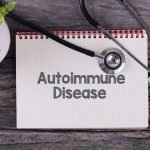 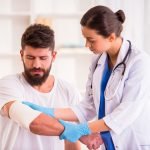