Today I want to present a simple example of a case helped by homeopathy. This case is typical of a day’s work, and as a naturopathic doctor I could not do without it.

June is an active lady in her early 70s. After consulting over the years with other members of her family, I finally got to meet her. She is pleasant and warm, with an expansive smile and an open attitude.

June had been suffering for many years with a Baker’s cyst behind her left knee. She reported that for a long time she had been exercising “too much.” At this point, a lot of exercising was out of the question due to pain.

The pain was worse sitting and driving, and worse on rising from a seat. She had received a massage one day that seemed to aggravate the pain significantly. June complained that sleeping at night was difficult because of the pain. It was shooting. And there was also always a sensation of pressure.

After a long homeopathic examination, the only concomitant I could find was painful bunions – a sharp pain in the great toe, which was exacerbated by walking. 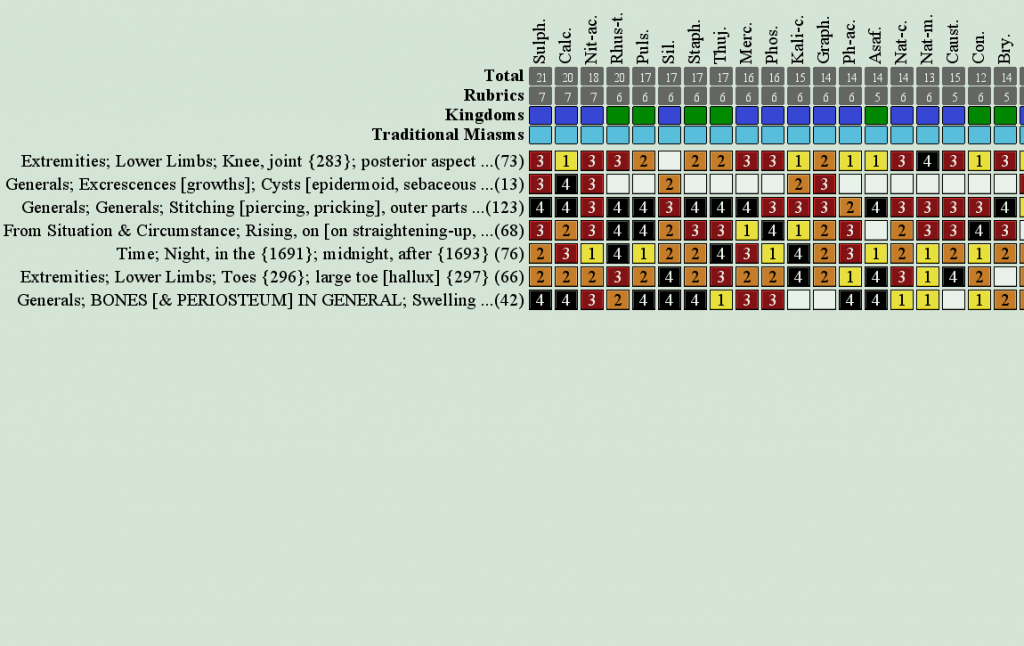 The above text provides a more complete rendering of the rubrics used.

The top 4 rubrics define the cyst as a complaint: location/complaint, sensation, and modalities.

If we look at Sulphur and Nitric acid, we see a consistency of grade and intensity. Only in this repertory does the consistency of grade act as a further highlighting factor indicating that such a combination of symptoms for these remedies was seen clinically and confirmed. Such an occurrence leads us to study the materia medica of these 2 remedies first.

Tearing in the lower extremities, especially at night [my own italics]

The hollow of the knee is very tense, and seems contracted all the afternoon (after seventy-two hours)

Pain in the hollow of the knees, as from stiffness, so that he was obliged to limp on beginning to walk

Sensation of swelling in the hollows of the knees, while walking in the open air [very similar to the sensation of a Baker’s cyst]

Stitches in the hollows of the knees, at night [Wow!]

Now when we recombine the salient symptom fragments (those in italics) from the materia medica, we can see a striking similitude to the patient’s spontaneously described complaints.

I found this more compelling than the descriptions for Sulphur.

Two weeks later, the patient reported, “It was a miracle! There was an almost-immediate 50% improvement in the pain. Then I decided to cut back on the frequency to 3 times weekly. By the end of the week I was screaming in pain again. [I had no idea she’d been screaming in pain.]

“I resumed the twice-daily dosing, and by the end of the first week could feel the effect of each dose as soothing. It now feels as if the size of the cyst is reducing. I have taken nothing extra for the pain since starting this remedy.”

Homeopathy is our most flexible and most precise tool when indicated. Its results are often wondrous. This is why so many intelligent physicians have fallen in love with this most wholistic of medicines. The only reliable “Sources” for homeopathic knowledge are the foundational original sources, not modern authors.

Understanding the Hahnemannian model of thought is foundational for a naturopathic doctor developing a wholistic clinical paradigm, even if there is no homeopathy in the practice. Unfortunately, some our schools have predicated their programs on what is popular. The result I see in our students is a progressive illiteracy in Hahnemannian studies.

Along with this is a progressive frustration with, and then dissociation from, this field. This has been occurring for several generations of students – now themselves teachers. Recently there have been articles “debunking” homeopathy, written by naturopathic doctors of this brand. This is only an attempt at politically justifying a surgical excision of the homeopathic program in our colleges, so as to become allopathically acceptable.

When we lose our foundational principles, there is no Naturopathy. 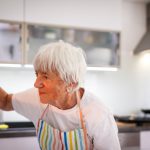 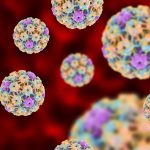