Although it is tempting to write a lengthy article about all the naturopathic treatments for dyslipidemia, I have been tasked with just talking about the relatively new ones. For the purpose of this article, “new” means there are new data from human trials or it is new to most of us. As a clinician, I understand the importance of clinically relevant articles written in a concise style. Before we begin, let us review the naturopathic treatments for hyperlipidemia that have a proven track record (Table 1). 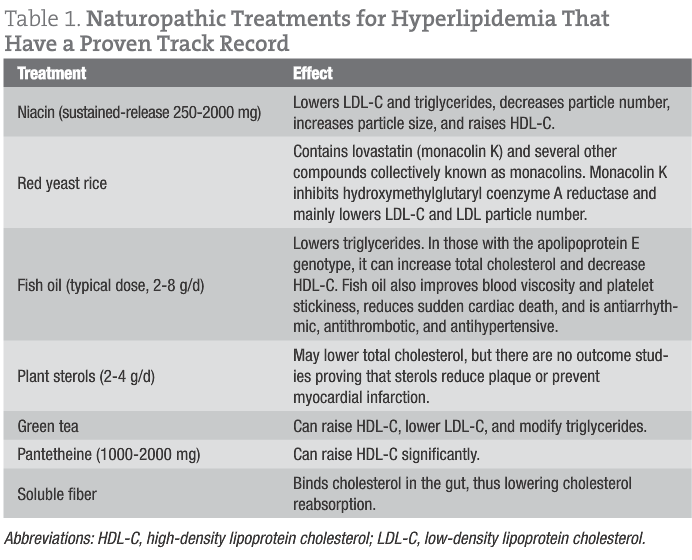 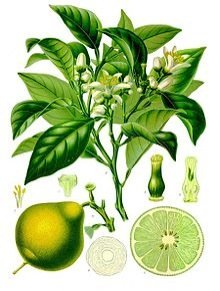 Although evidence suggests that dietary polyphenols such as resveratrol have a role in treating atherosclerosis through antioxidant and anti-inflammatory effects, most polyphenols do not affect lipids significantly. However, recent data have demonstrated that polyphenols from the fruit of Citrus bergamia (bergamot) can significantly modify lipids in humans.1 Bergamot is a citrus fruit from the Calabrian region in southern Italy with a unique profile of flavonoids and flavonoid glycosides such as neoeriocitrin, neohesperidin, naringin, rutin, neodesmin, rhoifolin, and poncirin. Bergamot differs from other citrus fruits not only because of the composition of its flavonoids but also because of the particularly high content. Naringin, present also in grapefruit, has been reported to be an active constituent in animal models of atherosclerosis,2 while neoeriocitrin and rutin have been shown to inhibit low-density lipoprotein cholesterol (LDL-C) oxidation.1

The juice of bergamot is rich in hesperetin, naringenin, and neohesperidosides such as melitidine and brutieridine. These flavonoids possess a 3-hydroxy-3-methylglutaryl moiety with a structural similarity to the natural substrate of hydroxymethylglutaryl coenzyme A (HMG-CoA) reductase and are postulated to have statinlike properties.

The recent study1 in Italy among 237 patients with hypercholesterolemia demonstrated that bergamot extract could modify lipids. Two hundred five patients enrolled in the study comprised the following 3 groups: (1) 104 patients with isolated hypercholesterolemia (LDL-C level, ≥130 mg/dL), (2) 42 patients with mixed hyperlipidemia (hypercholesterolemia and hypertriglyceridemia), and (3) 59 patients with mixed hyperlipidemia and hyperglycemia (fasting glucose level, >110 mg/dL). Each group was divided into 3 subgroups. The first subgroup received an oral dose of bergamot (500 mg/d), the second subgroup received 1000 mg/d of Bergamot, and the third subgroup received placebo. A fourth group consisted of 32 patients who had stopped simvastatin therapy because of intolerance; poststatin patients received bergamot (1500 mg/d) after a washout period and were asked to consume a diet of 1600 kcal/d. Overall, treatment with bergamot (500 or 1000 mg/d) for 30 consecutive days led to strong decreases in total cholesterol and LDL-C levels and a significant increase in high-density lipoprotein cholesterol (HDL-C) levels in most individuals. A statistically significant reduction in glucose levels was also observed.

Myoinositol, an isomer of inositol, favorably affects hyperandrogenism, oligomenorrhea, and insulin resistance, as well as the dyslipidemia often seen in polycystic ovarian syndrome. It works by boosting insulin signaling and by increasing the breakdown of fats and cholesterol. Earlier investigations document its effectiveness in the treatment of polycystic ovarian syndrome.3 A 2011 study4 supports the use of myoinositol to treat metabolic syndrome; during a 6-month period, 80 early menopausal women with metabolic syndrome were treated with myoinositol (2 g twice daily) plus a low-energy Mediterranean diet vs placebo plus the same diet. The treatment group experienced statistically significant improvements in diastolic blood pressure, insulin sensitivity, and serum triglycerides and HDL-C levels. The authors used the homeostatic model assessment to ascertain insulin resistance. This is an equation using fasting insulin and glucose levels to quantify insulin resistance and beta cell function. At the end of the study after 12 months on the diet, 8 women in the myoinositol group no longer had metabolic syndrome, whereas only 1 woman in the control group no longer had metabolic syndrome.

Berberine is a plant alkaloid commonly found in barberry, turmeric, and Oregon grape. It has shown promise in treating lipids, insulin resistance, inflammation, and elevated liver enzyme levels. In a 2008 study5 among patients with hyperlipidemia, berberine lowered LDL-C levels by 26.8%, while simvastatin lowered the levels by 28.3%. A combination of berberine and simvastatin decreased LDL-C levels by 46.2%. The results were similar in animal and human populations. Berberine hydrochloride was the preferred form used, at a dosage of approximately 1000 mg/d.

The lipid-lowering effect of berberine seems to be mainly due to the stabilization of hepatic LDL receptor (LDLR) and to an increase in the transcriptional activity of LDLR promoter. In addition, berberine decreases the activity of fatty acid synthase, acetyl-coenzyme A carboxylase, acyl-coenzyme A synthase, and lipoprotein lipase. Moreover, berberine activates 5′-adenosine monophosphate kinase, while blocking the mitogen-activated protein kinase pathway, resulting in inhibition of lipid synthesis.7

Although not that new, tocotrienols are an effective but underused naturopathic treatment. Tocotrienols are a class of vitamin E having several mechanisms associated with cardioprotection and chemoprevention. Tocotrienols have been suggested to have antioxidant and antithrombotic effects as well and may serve as an effective agent in the prevention or treatment of cardiovascular disease and cancer.

Treatment with tocotrienols has been shown to reverse atherosclerosis in patients with diabetes8 and to improve narrowing of the carotid arteries in patients with hyperlipidemia.9 Tocotrienols are effective in lowering serum total cholesterol and LDL-C levels by inhibiting the hepatic enzyme activity of HMG-CoA reductase through a posttranscriptional mechanism. However, alpha tocopherol has an opposite effect on this enzyme (ie, induction). Because tocotrienols are also converted to tocopherols in vivo, the recommended dosage must not be exceeded because this would be counterproductive. A 2002 study10 demonstrated the effects of various dosages of tocotrienols in 90 hypercholesterolemic individuals. The patients were initially placed on the American Heart Association Step 1 diet, and the effects were noted. While still on the restricted American Heart Association diet, they were then administered 25, 50, 100, or 200 mg/d of tocotrienols. The results showed that the optimal dosage of 100 mg/d of tocotrienols plus the American Heart Association Step 1 diet decreased total cholesterol levels by 20%, LDL-C levels by 25%, apolipoprotein B levels by 14%, and triglycerides levels by 12%. There was no benefit to using a larger dosage. Tocotrienols work in a manner similar to that of statins but with much fewer (if any) adverse effects because HMG-CoA reductase is not blocked. Therefore, there is no inhibition of coenzyme Q10 synthesis.

Tocotrienols may also work on peroxisome proliferator–activated receptors (PPARs). Peroxisome proliferator-activated receptors alpha, gamma, and delta are ligand-regulated transcription factors that have essential preventive roles in the development of atherosclerosis via regulating energy metabolism and inflammation. Tocotrienols modulate PPARs in a favorable way. Tocotrienols attenuated the development of atherosclerosis in ApoE−/− mice by inducing PPARs in the liver and the downstream target genes that affect apolipoprotein synthesis and cholesterol transport.11 Apolipoproteins are proteins that bind lipids to form lipoproteins, the carrier of cholesterol in the blood. Tocotrienols should be taken at least 6 hours away from tocopherols (vitamin E).

A 12-week randomized study12 in 24 adults with metabolic syndrome and an LDL-C level of 160 mg/dL or higher was conducted using a medical food. Twelve patients in a control arm were instructed to consume a modified Mediterranean and low–glycemic load diet. Twelve patients in the treatment arm received a phytochemical-enhanced diet consisting of the same low–glycemic load diet plus a medical food containing soy protein and plant sterols and hops rho iso-alpha acids and Acacia nilotica proanthocyanidins. All participants received identical aerobic exercise counseling. At 12 weeks, weight loss did not differ between the study arms. However, the treatment arm exhibited greater improvement than the diet-only arm in levels of total cholesterol, LDL-C, non–HDL-C, apolipoprotein B, and homocysteine and in the ratios of total cholesterol to HDL-C, triglycerides to HDL-C, and apolipoprotein B to apolipoprotein A-I, as well as total LDL particle number and large HDL particle number. All individuals in the treatment arm achieved LDL-C levels of less than 160 mg/dL compared with only one-third of participants in the control arm. Specific phytochemicals, including rho iso-alpha acids from hops (Humulus lupulus L.) and proanthocyanidins from acacia (Acacia nilotica), increased insulin sensitivity in adipocytes. Further investigations in mice revealed that the combined phytochemicals reduced both glucose and insulin levels by a level of magnitude similar to that of metformin and rosiglitazone maleate.12 Combination therapy with medical food is summarized in Table 2. 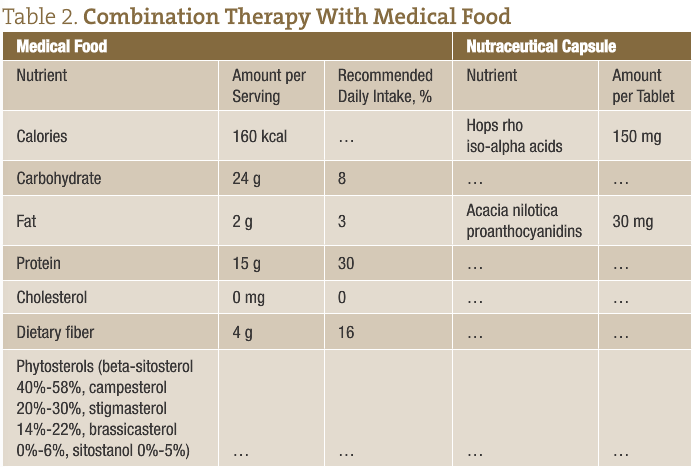 The use of Salvia officinalis L. (sage) leaf extract can antagonize PPAR gamma, inhibit lipid absorption, and reduce lipid peroxidation (through antioxidant effects). The PPAR agonists can help to improve blood glucose and blood lipid levels and may reduce the risk for atherosclerosis because they regulate the expression of genes that affect blood lipid metabolism, the generation of adipocytes, and blood glucose control. A 2011 randomized double-blind placebo-controlled clinical trial13 among 67 hyperlipidemic patients demonstrated the benefits of sage leaf extract consumption (a 500-mg capsule every 8 hours for 2 months) on fasting lipid levels. Creatinine and liver enzymes were evaluated and compared with those of the placebo group. The extract lowered total cholesterol, triglycerides, LDL-C, and very LDL-C levels and increased HDL-C levels, without any adverse effects on liver enzymes and kidney function compared with the placebo group at the end point.

In summary, the naturopathic therapeutic pharmacopoeia continues to expand. This is good for the profession because atherosclerosis is still the number one cause of myocardial infarction, and hyperlipidemia continues to be a problem among Western civilizations. In addition, recent data point to increased risks with the use of statin medications, specifically elevated blood glucose levels, especially in women, and a higher incidence of dementia.14 Therefore, the general practitioner should be an expert in the naturopathic treatment of lipid disorders for these reasons. Many patients who shun the use of prescription cholesterol modulators fail to achieve effective lipid control on their own.

Multiple strategies can be used for the statin-intolerant patient. First, decrease the dosage of statin medication, or prescribe its use every other day or every 3 days coupled with agents such as sustained-release niacin, tocotrienols, green tea, and a diet high in soluble fiber. As a second alternative, excellent lipid control can be achieved with red yeast rice, sustained-release niacin, fish oil, and plant sterols. Third, if the patient is intolerant of red yeast rice or niacin tocotrienols, then pantethine, bergamot, myoinositol, or other agents discussed in this article may be prescribed. Fourth, repetition of lipid testing after an agent is introduced is of paramount importance. Allow 4 to 6 weeks to determine the effectiveness of each additional treatment. Physicians need not fear prescribing sustained-release niacin because follow-up laboratory work can easily determine if liver enzymes are elevated; liver enzymes rarely become elevated at dosages at or below 1000 mg. Remember that contraindications for niacin include impaired fasting glucose level, diabetes mellitus, hyperhomocysteinemia, gout, and hepatitis.

For additional information on treating lipids, reversing coronary artery disease, and managing high-risk cardiovascular patients, consider reading my book Dare to Live: A Naturopathic Doctor’s Complete Guide to the Prevention and Treatment of Coronary Artery Disease (iUniverse.com). I also frequently post updates on my blog “The Preventive Cardiologist,” which can be accessed at http://naturemedco.posterous.com.

Stephen W. Parcell, ND earned his doctorate in naturopathic medicine from Bastyr University in 2002. Dr. Parcell has done additional training at the American College for the Advancement of Medicine (ACAM), the American Academy of Environmental Medicine, the Institute for Functional Medicine, the National Lipid Association (NLA), the Society for Integrated Oncology (SIO) and the American Academy for Anti-aging Medicine (A4M). He is the past Vice President of the Colorado Association of Naturopathic Doctors (COAND). He is also board certified in anti-aging medicine. Dr. Parcell has a strong background in medical research and “evidence-based natural medicine.” He has published articles in Alternative Medicine Review, The International Journal of Integrative Medicine, Integrated Medicine, a Clinician’s Journal and Naturopathic Doctor News and Review. He also authored a chapter in the textbook entitled “Integrative Approaches to Pain” published by Humana Press in 2008. He has just completed a book on reversing coronary artery disease called, Dare to Live: A Naturopathic Doctor’s Complete Guide to the Prevention and Treatment of Coronary Artery Disease published by iUniverse in 2011. He lives in Boulder, CO with his wife and two kids and is active on the masters road racing scene in Colorado. 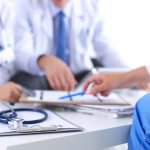 The Case for Creating a Specialty Society of Naturopathic Cardiovascular MedicineCardiopulmonary Medicine, Education 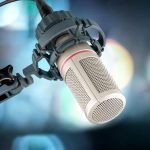 Tracking Plaque—Get With IT!: An Interview With Marc Penn, MD, PhDCardiopulmonary Medicine, Education