Supporting patients who experience anxiety, depression, and insomnia often is a long and arduous challenge for both the patient and provider. Although these conditions have standard labels, there often are many changing contributing factors. Genetic assessment can be used to direct treatment, and specific nutrient supplementation using nutrient forms such as methylated folate and methylcobalamin can impact neurotransmitter balance and ease symptoms. Even though these nutrients may help facilitate enzymatic function and neurotransmitter metabolism, it is worthwhile to consider the aspects of physiology that may be dysfunctional and how supplemental therapies might best address them.

Hyperactivity of the hypothalamic-pituitary-adrenal (HPA) axis and increased basal cortisol levels are common in patients with depression.1 Studies have shown that there is a reduced sensitivity of the glucocorticoid receptor at the level of the hypothalamus and pituitary, leading to impaired negative feedback.2,3 Animal studies have shown that cortisol inhibits melatonin synthesis in settings of stress,4 and human studies using prednisolone appear to corroborate this finding.5 Therefore, it may not be surprising that sleep difficulties are frequently associated with depression. On the other hand, in long-standing anxiety disorders, a lower cortisol awakening response has been observed, although findings from studies investigating total cortisol response are inconsistent.6 Nonetheless, sleep difficulties are also common with anxiety disorders and are associated with mental activity or worrying.

Are Brain Wave Patterns to Blame?

The alpha rhythm of brain wave patterns, known as alpha waves, predominantly occur during wakeful relaxation with closed eyes, and are present during activities such as meditation.7 Mixed findings exist concerning the alpha wave activity in conditions of anxiety, depression, and insomnia, likely due to the existence of slower and faster alpha waves, different regions of centralization, and other coexisting conditions.8,9 Interestingly, alpha wave activity may be inversely associated with systemic cortisol levels, as a study of individuals practicing yoga suggests. In this study of seasoned yoga practitioners, increasing alpha wave activity was correlated with decreasing serum cortisol levels during yoga practice.10 An increase in alpha wave activity overall is generally associated with an alert yet relaxed state and improved concentration, both of which are often impacted in depression and anxiety.

Neurotransmitters most often discussed in relation to anxiety and depression are serotonin, dopamine, and norepinephrine; however, other neurotransmitters, such as glutamate and γ-aminobutyric acid (GABA) also play an important role in mood regulation and arousal. Glutamate receptor subtypes have been shown to modulate excitability associated with anxiety, while in depression, a hyperfunctioning glutaminergic system may be an issue.11,12 Treatment with glutaminergic receptor antagonists such as ketamine or memantine have been shown to have positive effects in both anxiety and depression, including treatment-resistant depression. Increased inflammation has been observed in individuals who are responsive to glutamate antagonists, and inflammatory cytokines have been shown to affect glutamate metabolism.13

Concentrations of GABA, an inhibitory neurotransmitter, have been shown to be lower in people with major depressive disorder. In individuals with post-traumatic stress disorder (PTSD), lower levels of GABA were found specifically in the insular cortex, a region of the brain associated with emotional responses such as fear, and these lower GABA levels were associated with anxiety as both a condition and a symptom.15 Lower GABA concentrations in individuals with PTSD have been found to be associated with poor sleep quality.16

As a fermentation byproduct, GABA is found in teas such as pu-erh and food like kimchi.17,18,19 GABA supplementation has been shown to significantly increase alpha wave patterns during stress and reduce levels of anxiety in humans;20,21 however, the impact of GABA-promoting pharmaceutical agents on depression varies.14 The ability of orally administered GABA to cross the blood-brain barrier (BBB) has come into question. There is evidence for the presence of a GABA transporter in the BBB, but animal models suggest that the efflux rate may be considerably higher than influx rate.22 Liposomal delivery systems have been shown to facilitate transport across the BBB and increase availability of therapeutic agents in the central nervous system.23 Inflammatory mediators such as histamine and bradykinin increase BBB permeability and may contribute to individual variability.24 It also has been proposed that the observed effects of supplemental GABA are due to activation of GABA receptors in the enteric nervous system, and are modulated by the vagus nerve.25

Increased oxidative and nitrosative stress have been shown to contribute to depression via numerous mechanisms.26 Individuals with unipolar and bipolar depression have been observed to have increased levels of markers of oxidative damage to lipids.27,28 Lipid peroxidation and other forms of oxidative damage are associated with impaired cellular membrane fluidity and mitochondrial dysfunction, which may play a role in the pathogenesis of depression.29 Increased oxidative stress is inherently associated with inflammation, and, perhaps not surprisingly, a meta-analysis showed that patients with depression have higher levels of pro-inflammatory cytokines such as interleukin (IL)-1, IL-6, and tumor necrosis factor α (TNF-α),30 as well as elevated levels of acute phase reactants such as C-reactive protein (CRP).31 Although antidepressants are best known for their impacts on neurotransmitter availability, they also may impact depression by having anti-inflammatory and antioxidant effects.32,33

A Case for Melatonin

Melatonin is primarily produced in the pineal gland, although other tissues, such as the retina and lens of the eye, gonads, bone marrow, and gut, produce small amounts. Melatonin not only acts as a regulator of the circadian rhythm, but also is a neuroprotective antioxidant. Many studies have found that decreased melatonin production and disrupted rhythms occur with age,34,35,36 and factors such as electromagnetic pollution also may influence melatonin production and the circadian system.37 Decreased levels of melatonin and an altered circadian rhythm have been observed in depressed subjects,38,39 possibly in relation with increased cortisol levels.40 Because melatonin is synthesized from serotonin, lower levels of serotonin, and its precursor tryptophan, can contribute to lower melatonin levels.41 Single nucleotide polymorphisms associated with the rate-limiting melatonin synthesis enzyme, acetylserotonin methyltransferase, are associated with recurrent depressive disorder.42

Melatonin has been shown to protect against central nervous system oxidative damage, reducing lipid peroxidation and oxidative damage to nuclear DNA while stimulating mRNA levels of superoxide dismutase and the activities of glutathione peroxidase, glutathione reductase, and glucose-6-phosphate dehydrogenase.43,44 Evidence from experimental data and clinical studies show that melatonin has anti-inflammatory effects in the central nervous system, reducing pro-inflammatory cytokines including IL-6, IL-8, and TNF-α.45 By preventing lipid peroxidation, melatonin plays a role in maintaining the fluidity of biological membranes, which is necessary for cellular signaling and mitochondrial function.46

Melatonin receptor agonists and prolonged-release melatonin have been studied for the treatment of insomnia and depression.47 Agomelatine, a melatonin-receptor agonist and a weak selective serotonergic receptor (5-HT2C) antagonist, has been shown to improve depression and sleep quality,48 and may reduce associated anxiety.49 Melatonin has been shown in a variety of clinical settings to positively impact depression,50,51 both as a monotherapy and in combination with antidepressants.52,53 Improvements in depression-related insomnia and fatigue have been seen with sustained-release melatonin.54 In a literature review, melatonin was found to reduce anxiety associated with surgical procedures.55

Green tea is well known for its high amounts of antioxidants, particularly epigallocatechin gallate (EGCG); however, green tea also contains a high amount of the amino acid L-theanine. L-theanine is widely used and studied in Japan, a culture particularly known for their tea consumption. L-theanine has been observed to promote relaxation and reduce stress, possibly by increasing alpha wave activity and by blocking the binding of L-glutamic acid to excitatory glutamate receptors in the central nervous system.56,57,58

L-theanine has been shown to impact neurotransmitter balance. Animal research suggests that L-theanine can pass through the BBB and significantly increase brain serotonin and dopamine levels, particularly in the regions of the striatum, hypothalamus, and hippocampus.59 This L-theanine-induced rise in serotonin and dopamine has been correlated with decreased serum corticosterone levels.60 Additionally, continuous administration of L-theanine has been shown to increase expression of brain-derived neurotrophic factor (BDNF),61 a protein that increases neural plasticity and promotes neurogenesis, including the genesis of dopaminergic and serotonergic neurons.62 Increased BDNF levels are thought to be a mechanism by which pharmaceuticals, supplements, and exercise have a positive impact on anxiety and depression.63,64,65

Supplementation with L-theanine has been shown to have a relaxing effect in a resting state,66 reduce heart rate and salivary immunoglobulin A (sIgA) secretion in acute stress,67 reduce anxiety and attenuate blood pressure during a challenging mental task,68 and reduce salivary α-amylase activity and subjective experience of stress during academic challenges.69 These changes in the physiological and experiential responses to stress are thought to be mediated by reduced sympathetic nervous system activity, as measured by heart-rate variability and salivary α-amylase activity. As stress and the physiological stress response are known to affect anxiety, depression, and sleep, the consideration of L-theanine as an adjunctive treatment for these conditions is well supported. L-theanine has been shown to improve aspects of sleep quality in boys with attention-deficit/hyperactivity disorder,70 and reverse caffeine-induced decreases in slow-wave sleep in animals.71 Although L-theanine has not been studied for the treatment of depression in humans, animal studies suggest an antidepressant-like effect.72 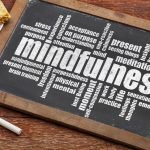 The Art of Being MindfulAnxiety/Depression/Mental Health, Mind/Body 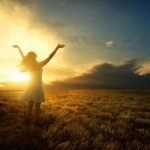