Related? The Periodic Table, Planets of the Solar System and Homeopathic Medicine

This article will investigate the mental/emotional properties of homeopathic remedies made of minerals and elements and the emotional characteristics of the planets in astrology, and explore how there may be a direct correlation between the planets of our solar system and the periodic table.

Homeopathic Use of the Periodic Table

Mineral remedies are comprised of various elements found in the periodic table. For example, Ferrum metallicum is a homeopathic remedy made of iron, Mag-Phos is a remedy made of magnesium and phosphorus, and so on. There are experts in homeopathy who have managed to group mineral remedies according to the psychological themes that they manifest in people. For example, there are a group of mineral remedies associated with relationship issues, others with depression, fear, family issues, childhood or developmental issues, etc. Renowned homeopaths Jan Scholten and Rajan Sankaran have managed to categorize the emotional and psychological themes of remedies based on their row and column position within the periodic table. 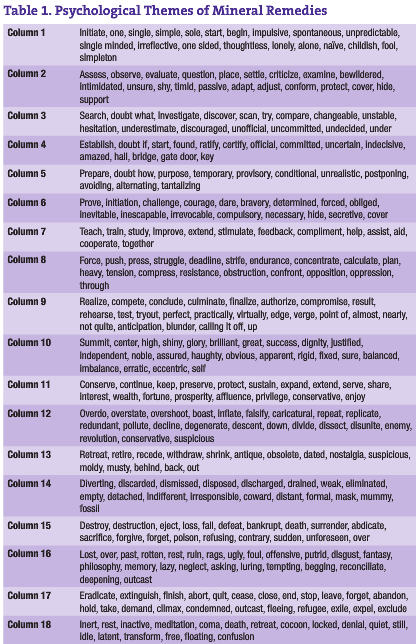 The Periodic Table and Astrology

Now that we have seen psychological and life themes within the periodic table, we will examine similar themes of planets according to astrology. In astrology, the planets exert certain influences on people, depending on their position in the heavens relative to the individual’s date and time of birth. 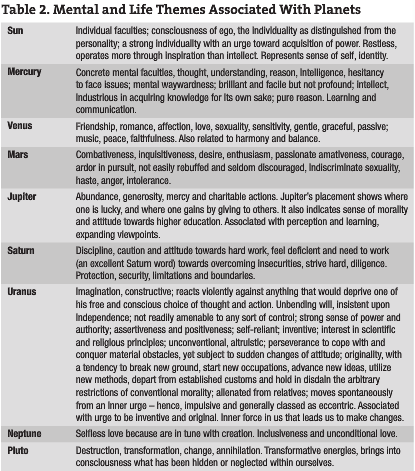 Certainly, there are missing pieces to this relationship; not all columns and planets have definite associations, and a lot more work needs to be done to find all the links. The intriguing part of this correlation is that as we move towards the right in the periodic table, we also move according to the way the planets are distanced from the sun. This is no surprise, however, because as we move towards the right in the periodic table, the number of electrons in the outer orbit around an atom’s nucleus also increases which, with a little stretch of the imagination, somewhat reflects the increasing number of planets that orbit the sun as we move further from the sun. This possibility is in harmony with the theory that the microcosm of the universe is reflected in the bigger macrocosm of the universe and vice versa. Hence, it is fair to assume that the atomic structure and arrangements of elements in the periodic table have some reflection on the way our planets behave in the solar system.

What Could This Mean for NDs?

There are many new fields of thought that can emerge from this hypothesis, including:

The list can go on and on. It is for interested scientists, doctors practicing homeopathy, and astrologers to bring this information closer together, and to find a correlation that may explain a tremendous amount about our universe. 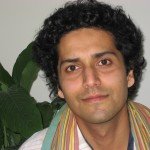 Ameet Aggarwal, ND is a graduate of CCNM. He did his post-graduate work in Gestalt psychotherapy at the Gestalt Institute of Toronto. He is the founder and executive director of The Foundation for Integrated Medicine in Africa (FIMA), www.FimAfrica.Org, a registered charitable organization delivering integrated medicine to remote villages in Northern Kenya. Currently he is in Kenya, finding ways to bring funding to FIMA’s mobile clinics. 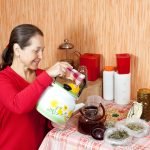 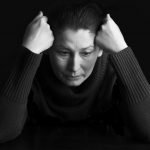