I just got off the phone with a lovely lady whom I had not spoken to for about a year since our previous appointment. The result was so striking to me in the way of a good teaching point that I wanted to share my learning with all of you. Technically, of course, the case is not yet cured. Despite this flaw, the story is well worth relating for other reasons.

Mary is a warm, friendly 68-year-old lady whose acquaintance I first made in 2009. Actually, I have never met her properly. Our relationship is only over the phone (I am not a telemarketer).

This can be a difficult way to take a case because the objective symptoms are not fully available and the quality of contact might be less, which can render important emotional or nuanced information less visible. I now love Skype (http://www.skype.com).

The presenting complaints were recurrent bouts of depression since adolescence, cataract, hair loss, fungal toenails, and obsessive tendencies. She had been seeing a good ND homeopath since 2002. Mary has a medical history of bilateral mastectomy in the early 1990s. This warm person is now retired but had been a practicing psychotherapist.

There have been recurring bouts of depression since adolescence. Initially, with homeopathy she did well on Ignatia during a 2-year period, with potencies ranging up to 50M. Gradually, even with increasing potencies, the response became less and less. (This indicates that, despite a strong sensitivity to the remedy, it is not in the range of being simillimum, where the response would increase or at least be consistent.)

She described her state as “like walking a tightrope”: “If a breeze comes along, I go over the edge, and it is hard to get my balance again. It’s a balancing act. It’s scary. The depression gets so profound I fear I’ll never come out of it. When down, everything is seen in a negative light. There is self-reproach, suicidal thoughts. My family will annoy me. It feels as if they do not care, they hate me.” The patient objectively sighed during the conversation.

Mary experiences stomach pains, which can be piercing but are mostly dull. They may cause her to catch her breath. She does not do well traveling because of claustrophobia and must sit near a window. There is a history of sleeplessness with the depression.

Four years ago, they had moved to a new home, away from their previous home of 25 years. To Mary, this meant losing 25 years of friendship. She has had a tendency to be reclusive ever since.

Since high school, she has periodically had a rash on her hands and feet. It gets red and itchy. In 48 hours, the itch will subside, and the area peels. The peeling can last for weeks.

There are some obsessive tendencies. She likes to count.

Mary also reported lower back pain. There is a shooting across the low back on rising from a chair. It is worse when walking on uneven ground, when stooping, and when turning. She experiences stiffness in the morning for the first hour or so. About temperature fluctuations, Mary said that “the older I get, the narrower the range of comfort.”

Her food preferences include bread and a very intense desire for eggs and spices. She has a mild aversion to licorice and butter.

Mary’s energy level is sluggish on waking. She experiences downtime from 5 to 6 pm and a resurgence at around 10 pm.

Mary was asked about her menses. She reported no trouble.

Her personality traits include a good sense of humor. She is well liked. She considers herself sarcastic and tries hard not to show anger. Mary is quiet with new acquaintances and noted that she can be judgmental.

A final reported symptom was cracking of her heels. Let us look at the repertory chart: 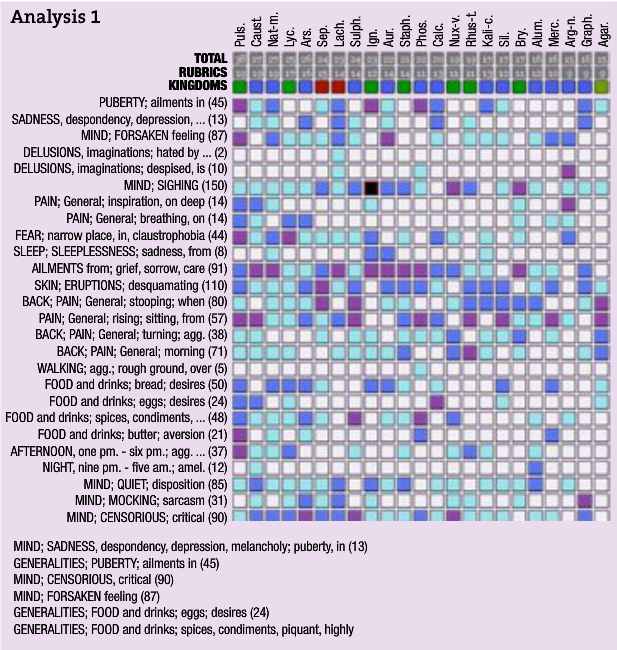 We limit our graph to first remedies in the rubric ailments in puberty and then eliminate with the use of the other rubrics. We are left with Pulsatilla

The overall thrust of the repertory chart seems to indicate Pulsatilla. The 5 pm aggravation, the cravings, the ailments in puberty, and, of course, the forsaken feeling fit Pulsatilla. However, the thermals are not classic Pulsatilla, needing a cold bedroom and fresh air, with strong sensitivity to the heat of the sun. I am ambivalent but do not see a clearly better choice and prescribe Pulsatilla 200.

The effect was not dazzling, but there was some improvement during a few months. When it ceased some 6 months later, we changed to Sepia and an occasional sprinkle of Ignatia. Despite general improvements, Mary still reported a susceptibility to being “down.”

In March 2010, the patient wisely took a break from treatment. Perhaps she sensed I had insufficient traction in this case.

In December 2011, our telephone paths crossed again. Before dialing, I took a deep breath to dive into this one, and I aimed to not come up for air without a characterizing symptom on the hook.

Mary reported recent depressive episodes, gum issues, and arthritic problems. The depression is usually about little slights that lead to hurt feelings. It seems that the patient’s mother had never liked her. In fact, she had spent 2 years of early life away from home. On observing, I detected some jealousy in Mary’s description of situations that might lead to hurt feelings: “The hurt emotion leads to ruminating; it’s like a broken record. The depression itself feels like a heaviness.”

I then went through the ropes and performed a homeopathic systems review (energy, thermals, sleep, etc). Again, I came to the question about menses: “no problem” was the answer. The bulldozer inside me was not happy, and I inquired further: “In spite of its being no problem, what was especially characteristic of its behavior?” (I like using the word “behavior.” It presupposes that the problem has a life of its own and asks for a description of the characteristic of that life.)

Then, it finally happened with Mary’s answer: “Well my premenstrual symptoms were just awful but no worse than anyone else’s. Anyway, as soon as my period began, it all went away.” Well, just sit me in the corner with a neon dunce cap on! The rubric for this is found in Generals; Menses amel. I think one remedy suddenly stands out. If we limit our chart to remedies in this last rubric, the graph now looks like this: 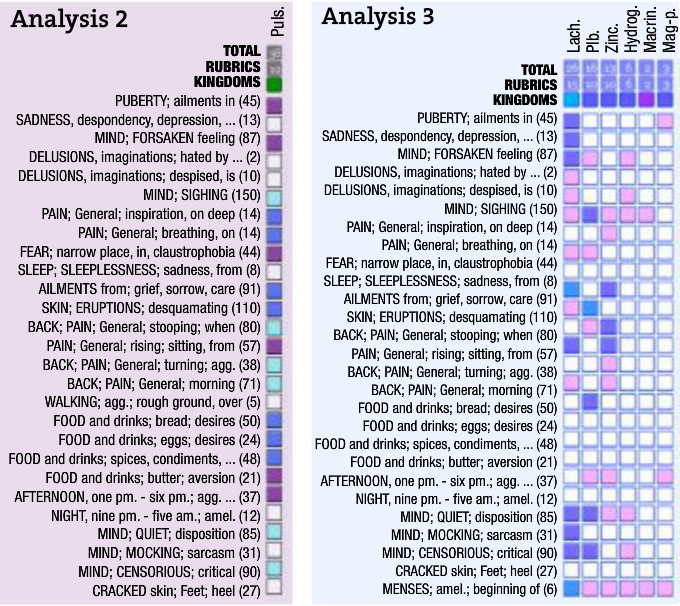 Notice how well the first symptoms coincide with Lachesis, as well as the last mental symptoms. Now, we have a remedy with some force behind its picture! I prescribed 1 dose of Lachesis 200 (3 pellets dry on the tongue).

What about the “counter case,” the argument against the choice of remedy? Well, we have no aggravation from the heat of the sun, constriction of clothing, or going to sleep, although there is some sluggishness in the morning and no great loquacity.

At the follow-up visit 5 weeks later, Mary reported that she is doing well and is going strong after that single dose: “Within 24 hours, the heaviness, that horrible feeling, went away and has really not returned. I am lighter and less vulnerable to being hurt. My libido has improved. I’ve decided not to do things I do not want to do.” Finally, I have a decisive beginning to the case.

It is interesting how the absence of one crucial symptom skews the analysis of a case toward confusion. Herein, the symptom was a menstrual one, yet our patient was well past this and into menopause. However, without this highly identifying syndrome from the distant past, I would have been lost (not an unfamiliar state).

In this instance, the initial case had no completeness until a remedy image could be seen. The fault was mine for not more vigorously investigating a realm of case taking because the patient dismissed it.

It is fascinating that from the patient’s perspective the “heaviness” lifted. Hahnemann in the Organon tells us that disease is originally an unpleasant sensation for the vital force and that the remedy cures by removing it. This could be an example of that.

Such difficulty is not rare. Case-taking skills are a constant challenge, as is the study of pure materia medica. It is unfortunate that such study is made virtually impossible at some of our colleges who claim with no foundation that their modern schools of “homeopathy” are clearly superior. Of course, all physicians have the right to explore and develop their healing abilities in their own way. However, it is the job of every school to foster excellence in the basics.

Homeopathic studies are central to our NDs developing a sense of holism. By allowing the work of some of these modern teachers to usurp the place of Hahnemann in the curriculum here in Canada, we have set back our profession by turning out for at least a decade practitioners with no literacy in this area unless they undertook to acquire it after graduation. Why?

Joseph Kellerstein, DC, ND graduated as a chiropractor in 1980 and as an ND in 1984. He graduated with a specialty in homeopathy from the Canadian Academy for Homeopathy, and subsequently lectured there for two years. He also lectured in homeopathy for several years at CCNM; for eight years at the Toronto School of Homeopathic Medicine; and for two years at the British Institute for Homeopathy. Dr. Kellerstein’s mission is the exploration of natural medicine in a holistic context, especially homeopathy and facilitating the experience of healing in clients. Dr. Kellerstein is presently teaching a post-grad course in Hahnemannian prescribing with Dr. Andre Saine. Its mission is to promote excellence in the basics of homeopathic prescribing; case taking; repertory; Organon as applied to real-life practice; and case analysis skills via modeling the masters 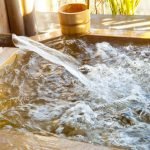 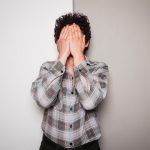 How to Make or Break the Outcome of Borderline Personality DisorderAnxiety/Depression/Mental Health, Homeopathy, Mind/Body, Neurology