In the May issue I wrote a general article on research of herbs affecting collagen and the health of the skin. My investigations turned up so much interesting research on a variety of skin conditions that I wanted to continue presenting the information in this issue. I would like to share information on Apiaceae family plants on skin inflammation and melanin production, as well as the ability of coffee and tea to assist in the absorption of agents into the skin.

The Apiaceae, or carrot family, includes the common foods carrots, parsnips, parsley and celery, as well the herbs Ammi visnaga, Angelica, Anisum, Foeniculum, Cnidium, Daucus, Lomatium, Coriandrum and Centella. Most readers will be aware of khella (Ammi visnaga) and fennel (Foeniculum) acting on the bronchial passages reducing spasm and allergic reactivity, and Angelica’s anti-inflammatory effects on platelets, blood cells, and blood vessels. You might not be aware, however, of the anti-inflammatory effects of these plants on the skin and on melanin production in the skin.

Foeniculum, Cnidium, and Centella are noted to have anti-allergy effects as well as positive effects on collagen. Umbelliferone, a coumarin found in numerous Apiaceae members, has been shown to have a normalizing effect on collagen.1 Foeniculum extracts are noted to reduce allergic inflammation in the skin as well as possess an analgesic effect.2 A reduction in allergic inflammation may relate to an increase in plasma superoxide dismutase accomplished by these plants. Daucus carota seed extracts (wild carrot or Queen Anne’s lace) have also been noted to inhibit cyclooxygenase, having the ability to reduce inflammatory prostaglandins in league with pharmaceuticals.3 Studies also cite Angelica’s effectiveness in treating allergies and respiratory complaints.4,5 Angelica has been found to have an antihistamine effect.6,7 Many umbells, therefore, are appropriate topically and internally in skin formulas, especially for hives, eczema, dermatitis, and other allergic phenomena in the skin. Many aromatherapists report that carrot seed oil improves fine lines, minute veins, and complexion in general when used topically.

Another interesting action of Apiaceae family plants is their photosensitizing ability. Many are high in a number of coumarins and are among the botanicals that might be concentrated and used topically to increase photosensitivity and used as part of a protocol for psoriasis and vitiligo. The topical application of khellin, found in Ammi visnaga, in combination with UV or natural sunlight, may be effective for chronic skin lesions due to mild photosensitizing effects, which in this case can be used to a therapeutic advantage. One study reported the method to be successful for palmar and plantar pompholyx.8 The Apiaceae contain furanocoumarins, which like chlorophyll and other pigments, are known to increase the absorption of UV light.9-11 Research has shown that these coumarins initiate the formation of photoadducts with microbial DNA and may be one explanation for the antiviral effects of Lomatium and other umbels. These photoadducts may also stimulate dermal cell activity and help resolve difficult skin conditions such as psoriasis12 and vitiligo. When the coumarins, such as psoralens, xanthotoxins and bergaptens are concentrated from these plants, significant phototoxicity to the point of being injurious may occur, thus care is needed in using this therapy.

Psoralen combined with UV radiation has been a mainstay in the treatment of psoriasis and a variety of difficult dermatoses for many decades, particularly prior to the advent of suppressive steroidal ointments.13 Both the ingestion of oral psoralens and psoralen baths have been used prior to UV light therapy for psoriasis and skin conditions.14,15 Xanthotoxin, a coumarin found in many Apiaceae members, is reported to be reasonably well absorbed and to be retained in the stratum corneum for 24 hours.16 The coumarin bergapten is also found in Monarda (bergamot) and is the aromatic flavoring agent added to Earl Grey tea. Hypericum is also well known to be a photosensitizing agent. Hypericin absorbs UV radiation and although oral ingestion of Hypericum does not typically cause photosensitization, topical application will readily do so.17 As exemplified in the formulas below, combinations of these photosensitizing herbs might be used orally and topically as part of treatment protocols for psoriasis and vitiligo. 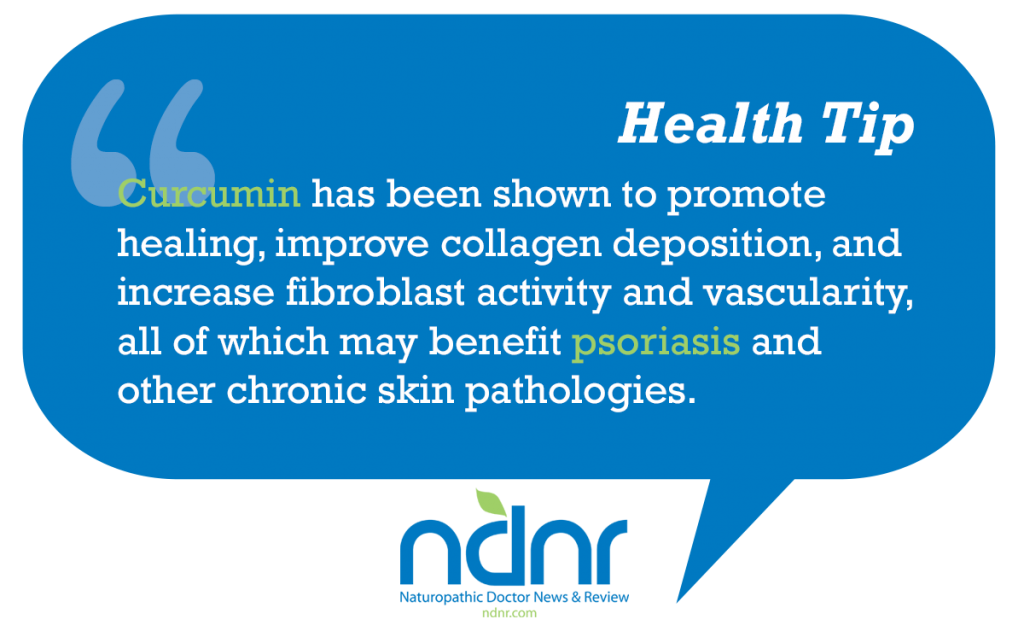 In addition to phototherapy for psoriasis, a number of other herbs and vitamins might be considered for psoriasis protocols. Vitamin A and zinc appear appropriate for all skin conditions and psoriasis is no exception. Vitamin D, both orally and topically, might also promote healing in cases of psoriasis and other skin diseases.18 Vitamin D production is promoted with UV light exposure and thus another mechanism whereby phototherapies improve skin complaints may be due to increasing Vitamin D content in the skin. Vitamin D3 inhibits squamous proliferation in the skin, which is typically excessive in psoriatic lesions, and also enhances healthy differentiation of skin cells, as well as plays other immunologic roles within the skin.

Curcuma, discussed in detail in the May issue, may be useful for psoriasis both topically and internally. Oral Curcuma longa has been noted to offer some improvement against psoriasis.19 Curcumin has been shown to promote healing, improve collagen deposition, and increase fibroblast activity and vascularity,20 all of which may benefit psoriasis and other chronic skin pathologies.

The Green Hellebore plant, Veratrum, is a potentially toxic plant due to strong cardiac effects as well as a noted teratogenic effect, including a tendency to induce cyclops. A potentially toxic steroidal alkaloid in the plant has therefore been named cyclopamine. This alkoloid disrupts intracellular signaling pathways in dermal cells,21 which may help reduce the accelerated rate of skin cell maturation.22 This same mechanism may induce apoptosis in cases of basal cell carcinoma and improve differentiation of skin cells.23 Experienced herbalists may include a small amount in internal formulas for psoriasis, or include it in recipes for topical application. For obvious reasons, Veratrum should not be taken during pregnancy.

Coleus forskohlii has been studied for effects on cAMP. Since the greatly accelerated cell turnover rate in psoriasis involves cAMP, there has been some research on Coleus to normalize cell division and replication.

Many of the photosensitizing herbs and miscellaneous natural therapies discussed above may also be helpful in cases of vitiligo. The precise cause of vitiligo is uncertain, but the fact that it can sometimes run in families suggests a genetic component, and most researchers believe there is also an autoimmune component involving antibodies to melanin. There may also be an endocrine or hormonal component because vitiligo is more common in patients with diabetes, Addison’s disease, and thyroid imbalances. Some patients show antibodies to thyroglobulin, adrenal cells, and parietal cells.

There are no real allopathic therapies for vitiligo. UV therapy with oral or topical psoralen is often attempted, though the results vary. There has been a limited amount of research on alternative treatments for vitiligo.

Because the production of melanin involves tyrosine and copper-dependent tyrosinase enzymes, supplementation with tyrosine and copper may be a place to start. The photosensitizing herbs discussed above for psoriasis may also be worthwhile to try for vitiligo. One study reported that topical Ammi visnaga in combination with UV therapy was helpful for vitiligo.24 Researchers reported that the younger the patient, the better the result. Khellin is reported to stimulate melanocytes.25 One group of investigators administered encapsulated khellin in tandem with phenylalanine and phosphatidylcholine in conjunction with UVA light therapy. They compared this protocol to the effects of UV light alone. After one year, the group using the khellin protocol displayed significant repigmentation compared to the UV only controls.26 Khellin penetrates the stratum corneum with topical application and iontophoresis has been shown to increase the concentration in the skin.27 Iontophoresis is also noted to increase, sometimes disastrously, the photosensitizing effects of topically applied Hypericum. If this technique is employed, exposure to sunlight must be carefully controlled.

Genistein, an isoflavone high in soy and other legumes and legume family herbs such as Trifolium and Medicago, is noted to protect melanocytes from UV radiation, decreasing the risk of melanomas. Genistein increases melanin production and tyrosinase enzyme activity, and may therefore be useful in cases of hypopigmentation.28

Pepper species including Piper nigrum (black pepper) and Piper methysticum (kava) are reported to stimulate melanogenesis.29 Kava lactones are credited with this effect, as are lignans such as cubeb and the alkaloid piperine found in black pepper.30 One group of researchers reported Piper nigrum to act via stimulation of protein kinases involved with melanin production.31

Camellia sinensis, Coffea arabica and Terpenes Enhance Absorption of Agents Into the Skin

All NDs are aware that phenolic compounds, such as the catechins, have antioxidant and anti-inflammatory effects, and many are credited with anticancer effects. Recent investigations are also showing anti-aging effects from green tea catechins when used topically.32 Catechins have free-radical scavenging effects and an ability to protect from UV radiation when used both orally and topically.33 Camellia (green tea) catechins also improve type I procollagen synthesis and water retention in the skin.34 Camellia has also been shown to be an elastase inhibitor,35 thus prolonging the life of elastin in the skin, which also serves to retain skin tone and elasticity.

Xanthines are compounds in plants that include the stimulants caffeine, theophylline, and theobromine. Xanthines are a type of polyphenol, an enormous category of plant compounds, many of which have powerful antioxidant effects. Orally ingested caffeine, in the form of green tea or coffee, has been shown to reduce cancerous changes in cells exposed to UV radiation.36 Apoptosis in skin cancer cells may be encouraged by the oral ingestion of caffeine which may reduce the tendency to actinic keratosis and squamous cell cancers by protection from UV radiation.37 Other researchers have confirmed these findings reporting that both oral and topical use of caffeine promotes apoptosis of UVB irradiated keratinocytes.38 In addition to caffeine, caffeic acid found in coffee, green tea and other foods affects tyrosine kinase activity in a manner that inhibits ultraviolet damage and inflammation.39

Terpenes have been demonstrated to enhance the absorption of xanthines, including theophylline and green tea catechins, into the skin.40 Since many essential oils are high in terpenes, their addition to skin preparations may improve penetration of medicines into the stratum corneum. The naturally-occurring oxygen-containing terpineols have been found to be better vehicles than the petroleum-based hydrocarbon terpenes, which are less effective in enhancing absorption. Due to their beneficial effects on the skin in general, Helichrysum, carrot seed, and rose essential oils are particularly recommended.

Possible Formulae for Psoriasis and Vitiligo

In conclusion, the use of strong green tea, essential oil, and even coffee in topical preparation for skin diseases may help reduce inflammation and enhance the absorption of other agents in formulas for skin diseases. The ingestion of genistein-containing leguminous herbs and coumarin-containing Apiaceae herbs, in addition to vitamin D, copper and tyrosine may round out the treatment protocol. Due to the tenacious nature of these skin conditions, these treatments are recommended for an entire year before a judgment is made on their efficacy. Following are a few formulation ideas based on the use of photosensitizing, melanocyte-protecting, and anti-inflammatory herbs. 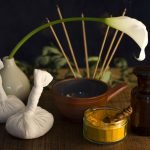 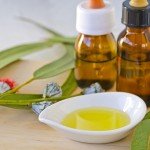