During my early years as a clinical intern I was tasked with seeing a new patient who was considered difficult. She was irritable, untrusting, and many in the clinic had questioned if she was of sound mind. Nevertheless, it was my job to diagnose and treat this patient that was asking to be seen for dietary advice. She was sure all of her problems were stemming from some unknown allergy. During our interview, I learned that she had experienced being unhoused; she had been occasionally spending time with her family while living in shelters, but would only disappear again. I initially felt overwhelmed, but my heart ached for this patient, and I was certain I could find a rational explanation for her symptoms. I was a new and excited naturopathic doctor and, after all, there was nothing I felt I couldn’t get to the bottom of – at least, with the help of my supervisors and mentors! However, what resulted from this case, and why I write about it so many years later, was more than just a beautiful story of the power of the body to heal itself. It also marks one of the first times I saw herbal medicine correctly applied. What I witnessed was not only the transformation of a serious disease, but healing that occurred for the patient, her family, and her community.

The patient’s list of problems was extensive: anxiety, sleeplessness, heart palpitations, weight loss, extreme discomfort while eating, and absolutely no appetite. Her anxiety would often rise to the state of paranoia, and this led to her changing housing situations regularly. Moreover, at her first visit, she carried with her a stack of paper about as thick as a package of printing paper. It contained handwritten notes on every single thing she had eaten, every day, for several years. She was certain that an answer lay within this dietary ledger.

Her physical examination was remarkable for an extremely frail, hypertensive, 40-year-old woman with tachycardia. Though I was still green behind my ears in the art of diagnosis, her exophthalmos, resting tremor, and hyperreflexia, coupled with her overall anxiety, led me to a differential diagnosis that included hyperthyroidism most likely caused by Graves’ disease. The next step ordinarily would be to get lab work done to confirm the diagnosis, but she strongly resisted this suggestion. At that point in her journey, she believed that the bloodwork would be used for some nefarious means. No amount of explanation would sway her. So, a choice was made to use an herbal approach to support the patient and to ask her to follow up so we could track her progress over time. In this case, establishing a rapport with the patient was a necessity to cure. Without it, she would have been very unlikely to follow any recommendations whatsoever.

The strategy we chose was to meet the patient where she was at and to provide a botanical tincture. The patient was amenable to an herbal formula, and our presumptive diagnosis at that time was Graves’ disease. We formulated a tincture of Melissa officinalis (lemon balm), Leonurus cardiaca (motherwort), Lycopus virginicus (bugleweed), Lithospermum ruderale (stoneseed), and Glycyrrhiza glabra (licorice). While some of these herbs may be familiar to naturopathic doctors, Lithospermum ruderale is often derided as a low-dose herb that exists primarily to confuse doctors on their board exams. This isn’t entirely untrue, but it is also an exceptional herb when used for sedating an overactive thyroid. Lithospermum ruderale is considered potentially toxic to the thyroid gland; and though it is said it can permanently damage the thyroid with long-term use, no clinical data currently supports this claim. Nevertheless, given the ability of Lithospermum ruderale to affect the thyroid strongly by disrupting TSH signaling and iodide transport in thyroid cells,1 it made sense to use it in this case. We exercised appropriate caution and made the patient aware of the dangers of long-term use of the tincture during the PARQ conference. Beyond potential danger to the thyroid gland, Lithospermum ruderale also contains unsaturated pyrrolizidine alkaloids,2 which have been linked to hepatic veno-occlusive disorder and are another reason exercise caution with this herb.

The formula was designed to be strong and relatively fast-acting. In order to ensure her safety and help monitor progress, we provided only 2 oz of the tincture and insisted she follow up to get a refill or to change treatment strategies within 2 weeks.

As requested, the patient returned within 2 weeks for her follow-up. The results had been immediate. Her speech pattern had improved, her appetite had returned, and she reported sleeping through the night for the first time in a long time. Perhaps most importantly, she stated that she had been in contact with her sister. They were working on mending their relationship, which had been strained due to the patient’s paranoia. Additionally, the patient agreed to get the blood work we had initially requested. On physical examination, her exophthalmos, resting tremor, and tachycardia all remained unchanged. Her blood pressure, though still elevated, had decreased slightly.

The lab work confirmed, perhaps unsurprisingly, that she had Graves’ disease. Her TSH was low, her T3 and T4 were both elevated, and thyrotropin receptor antibodies were present. The next step was to recommend the standard of care for Graves’ disease – beta-blockers and thyroid suppressive drugs. The patient, however, was vehemently opposed to any pharmaceutical intervention. After a great deal of discussion, the decision was made to refill the patient’s herbal prescription for another 2 weeks and revisit the plan for pharmacotherapy at that time.

The patient returned for her second follow-up approximately 1 month after initiating the botanical treatment prescribed for Graves’ disease. On examination, her exophthalmos had visibly improved, which I had not expected to be possible in such a short time. Moreover, her heart rate and blood pressure were within normal limits. With her symptoms coming under control, the patient had also begun making significant strides in other areas of her life. She reported that she was no longer unhoused and had begun living with her sister. She had also taken a job working in retail and was thinking about going to community college.

She did report adding an over-the-counter flower essence to her regimen because she was still having episodes of severe anxiety. At this time, we decided to alter her herbal formula. Out of an abundance of caution and to help with her anxiety, we removed the Lithospermum ruderale and increased the concentrations of Melissa officinalis and Lycopus virginicus in its place. We gave her a final month’s supply of this tincture and strongly recommended that she work with an endocrinologist as another ally to help her life continue in its upward trajectory. She said she would think about it and thanked us sincerely for our help.

During her 1-month follow-up was the last time I saw this patient. I was rotated out of the shift, and for ethical reasons, I could not open her chart or otherwise follow her case. I did ask one of my clinic supervisors about the case towards the end of my internship years, and I was told only that the story had a happy ending.

I have always wanted to write up this case study because it has lived with me and informed my clinical decisions. Early in my career, I tended to skew on the side of being very conservative in my views on diagnosis and treatment. I tended to spend a great deal of time reassuring patients of the values of the standard of care, helping patients not demonize pharmaceuticals when they were honestly needed, and not overselling the power of things like herbal remedies. This case taught me the power and value of botanical medicine, and though it took me a little while to develop my own confidence, if I had not been able to participate in the healing that took place, I don’t know that I would be the kind of practitioner I am today. Even in a case that I never would have believed could be managed with herbs alone, I got to witness not only the biochemical actions of these herbs, but the effects it had on the patient’s personal life. I will always cherish and stand in wonder at the ability these botanicals to help her not only discover the true cause of what she had thought was an allergy, but to be able reintegrate into her family and into society.

I feel called to review the herbs chosen for this case in a wider lens than just “classic thyroid herbs.” Melissa officinalis, while known to calm the thyroid, also is an anxiolytic and helps people remember the “sweetness” of life when they’ve become bitter. Glycyrrhiza glabra may be anti-inflammatory and help hold molecules in solution (due to its saponins), but it also restores tired adrenal glands and gives people some ground to stand on when they feel they can’t find their footing. This, of course, is a reference to its use in traditional East Asian medicine, where it supports the Earth element – the aspect of us that acts as the center point from which to expand or contract. The Eclectics wrote that Lycopus virginicus worked as well as digitalis for the heart, but without the worry of toxic buildup that the latter herb can produce in high doses. And in my mind, Lithospermum ruderale is perhaps the most pigeonholed of the herbs discussed in this article. That said, it is this doctor’s belief that it did help a patient in dire need, and for that, I am forever grateful.

Brian Keenan ND, LAc, is an herbalist, naturopathic doctor, and Five Element acupuncturist. He enjoys studying and synthesizing plant medicine science and spirituality. He has dedicated his life’s work to the pursuit of combining the best modern knowledge with natural wisdom to educate and aid others. He also strives to help remind the world that plants, planet, and people thrive when in harmony with each other. Dr Keenan is currently the education manager at Ayush Herbs and runs a small practice in Columbia, MD, called Magnolia Natural Medicine. 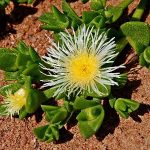