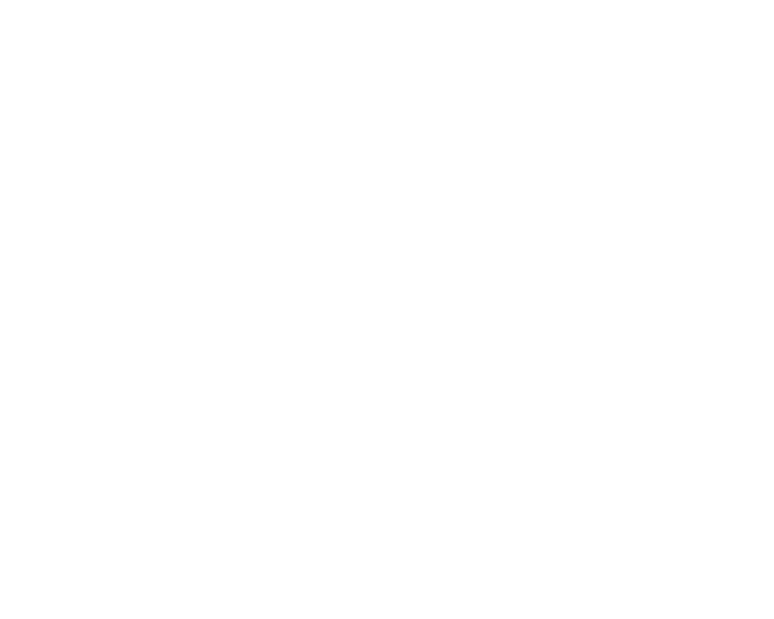 Thyroid Health in Down Syndrome

Reverse T3 in Infants with Trisomy 21 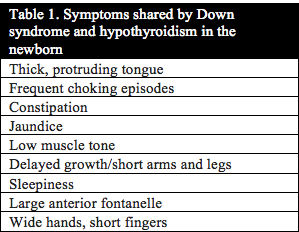 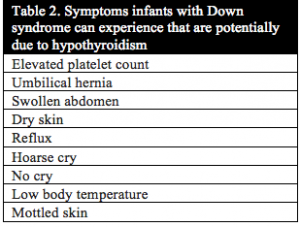 Reverse T3 (3,3′, 5′-triiodothyronine) is a form of thyroid hormone that is not routinely checked in clinical practice. It is created when the deiodinase 3 enzyme removes the iodine from the inner ring of T4 (tetraiodothyronine) (Figure 1). Up-regulation of deiodinase 3 occurs in the presence of oxidative stress,7 which occurs at higher level than normal in individuals with Down syndrome even before birth. Elevated reverse T3 has been shown to interfere with active T3 function within the cell and can, therefore, create the same symptoms of hypothyroidism that a low T4 level can.4-8 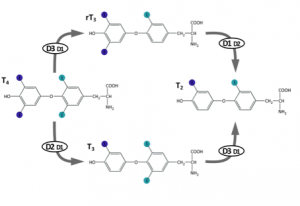 Many researchers today are working passionately to uncover ways to improve the health and cognition of individuals with Down syndrome. Many biochemical processes are being studied including development of Alzheimer’s, circadian rhythm disruption and mitochondria function, to name a few. Disruptions in these systems being studied are almost always contributed entirely to the presence of the extra copy of chromosome 21. The role that thyroid hormone plays in these biomedical disturbances seen in individuals with Down syndrome is often ignored. Listed here are the studies that support the role that active thyroid hormone (T3) plays in the regulation of several processes that are being studied in Down syndrome.

Researchers from Italy are studying the use of Bumetanide, a diuretic drug that inhibits NKCC1 transporters, in a mouse model of Down syndrome.9 This sodium potassium chloride transporter is found in the brain during early development but not in adulthood. The presence of these transporters is thought to be responsible for the high intracellular chloride concentrations of very immature neurons. The shift in GABA-A receptors from excitatory to inhibitory is due to the decrease in chloride concentration within the cell as it matures.10 During early development GABA-A receptors transmit excitatory signals and in adulthood these same receptors transmit inhibitory signals as seen in Figure 2. This maturation of GABA-A receptors is an important part of normal brain development. If this maturation process doesn’t happen properly neurons are at risk for increased activation of the NKCC1 transporters which ultimately leads to their destruction via lysis. Bumetanide would prevent this destruction by inhibiting NKCC1 transporters. This maturation process has been shown to be impaired in Down syndrome and is potentially a major cause of low cognitive function in Down syndrome due to neuron destruction.11 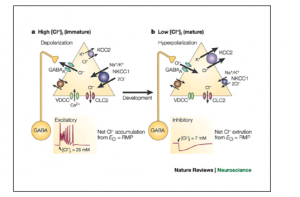 It’s possible that this maturation process is impaired in Down syndrome due to untreated congenital hypothyroidism. Bumetanide would not be needed if the cause for this lack of maturation was revealed. Thyroid hormone plays a critical role in the maturation of GABA-A receptors in the brain.12,13 One important aspect of the impact that T3 hormone has on GABAergic neuron morphologic development is timing. “An early onset and continuity of T3 supplementation were necessary for the increase of burst frequency, and a late supplementation did not rescue the decreased burst frequency due to previous hormone deprivation.”13 This is a mechanism by which congenital hypothyroidism creates irreversible cognitive delay.

The connection between Alzheimer’s disease (AD) and Down syndrome has been well-established. In fact, the rate of AD in those with Down syndrome by the age of 40 is 100%. Because no treatment for AD has been developed, identifying and treating the underlying cause is key. The most current theory behind the cause of AD is the presence of excess amyloid beta protein originating from the APP gene.  Although the APP gene is on chromosome 21 and over-expression of this gene is expected, silencing of the APP gene is T3-dependent.14,15 If T3 hormone levels are not optimal, one would expect that this gene is not properly silenced. In fact, it has been shown that low levels of T3 are seen in patients with AD.16 Could the rate of AD in those with Down syndrome be reduced if T3 hormone levels were assessed and properly managed?

Dr. Roger Reeves and his team at Johns Hopkins University are leading the way in researching Sonic hedgehog (Shh) response deficit in Down syndrome.17-19 Shh is a protein that plays a critical role in embryonic organ development including that of the brain. The cause of Shh dysfunction in T21 has not been established. However, Desouza, et al., have shown that the Shh gene is thyroid-responsive.20 Once again, timing is important as they state, “Several studies suggest that the critical period in which thyroid hormone exerts dramatic effects on neuronal structure appears to be predominantly during early postnatal life.”

In 2014 researchers in Switzerland revealed altered gene expression throughout the entire genome of fetal Down syndrome fibroblasts.21 This new information greatly impacts the thinking that the phenotype of trisomy 21 (T21) is strictly due to genetic over-expression of chromosome 21. Dr. Ben Tycko and his team at Columbia University also showed that genome-wide impairments in methylation patterns can be seen in T lymphocytes from Down syndrome subjects.22

The variation seen in genome-wide DNA methylation patterns in T21 lymphocytes was theorized by the researchers at Columbia University to be due to the over-expression of DNMT3L gene that’s on chromosome 21. DNMT3L is the gene for one of three DNA methyltransferase that catalyzes the transfer of a methyl group to DNA. The methylation of DNA is a main epigenetic mechanism that controls DNA expression. DNMT3L controls DNA methylation through its direct action on DNMT3a and DNMT3b.23 It’s been shown that the DNMT3a gene is regulated by thyroid hormone in Xenopus tadpoles.24 Although the full extent of thyroid hormone receptor distribution is not fully understood, T3 has been shown to activate or repress genes.25 Not all T3-induced genes have been identified, yet it is recognized that thyroid hormone receptors are “widely distributed throughout the genome.”26

The question that remains unanswered is “Are the genome-wide variations seen in T21 cells due to the extra copy of chromosome 21 or is there another factor involved like T3 hormone?”

While skeletal abnormalities and decreased growth in individuals with Down syndrome are often apparent when comparing adults with Down syndrome to the typical population, research supports this observation.27,28 This disturbance in normal bone growth has been linked to over-expression of Dyrk1a on chromosome 21. However, the role that thyroid hormone plays in skeletal development warrants recognition for its potential role in this impaired aspect of development seen in T21. Thyroid hormone has been shown to have a great deal of influence on fetal bone development as well as adult bone maintenance.29,30

Circadian rhythm disruption and sleep apnea has recently been studied for its impact on cognitive function in Down syndrome by researchers at the University of Arizona.31,32 Many parents experience sleep disruption in their children with Down syndrome that can have an impact on the overall health of the child as well as the parents. Sleep physiology is a very complicated aspect of health that requires optimal production and metabolism of neurotransmitters, optimal breathing patterns, optimal endocrine function, optimal levels of certain vitamins, among many other things. Thyroid hormone plays an important role in the body’s ability to maintain a normal circadian rhythm pattern. There are many studies linking hypothyroidism to sleep apnea and general sleep disturbance in human and animal studies.33-35 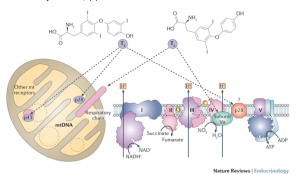 Although there is a potential for reverse T3 playing a role in the symptoms of Down syndrome, few studies have been conducted on reverse T3 in typical newborns and infants and no studies exist comparing levels of reverse T3 in typical infants to infants with Down syndrome. In 1975 Chopra, et al concluded from their study that “high serum rT3 concentration in the newborn becomes comparable to that in the normal adult by 9-11 days of neonatal life.”43 Many years later, in 2004, Williams, et al compared cord blood levels with postnatal serum levels of thyroid hormone.44 They measured TSH, free T4, total T3, TBG and reverse T3 in order to uncover trends in postnatal serum thyroid hormone levels in preterm and term infants. They found that “The rT3 values at all postnatal ages and in all groups are substantially below the cord values of the equivalent gestational ages.” These 2 studies confirm that some knowledge exists about the potential function of reverse T3 in fetal development, but more studies are needed. Dr. Rosalind Brown has written, “This is consistent with the key role of D3 in protecting fetal tissues against high maternal T4 concentrations present either in the placenta or in amniotic fluid.”45 She acknowledges the important presence of D3, the enzyme that makes reverse T3, in fetal development.

It’s been my clinical experience after testing reverse T3 in hundreds of infants with Down syndrome is that it is elevated in a majority of infants under the age of 1-year-old. In addition, treating this elevation in reverse T3 with small doses of T3-only medication (liothyronine) in these infants alleviates their symptoms of hypothyroidism and greatly improves their development.

The current dominant medical paradigm does not recognize serum reverse T3 levels as having any function in the clinical setting. This thinking has the potential to miss a lot of patients who are experiencing hypothyroidism that is evident in many symptoms but ignored due to a patient simply having a normal TSH. Developing a better understanding of thyroid hormone dysfunction in newborns and infants with Down syndrome that could include an elevated reverse T3 can lead to better overall health, development and cognition for these children that can extend into adulthood.

Given the complexity of thyroid hormone production, activation and transport and the apparent role it may play in the cognition and health of individuals with Down syndrome more research into the mechanism behind thyroid hormone dysfunction in Down syndrome is greatly needed. As well, researchers need to be aware that when studying individuals with Down syndrome they may actually be studying the effects of hypothyroidism and not the impact of an extra copy of chromosome 21. 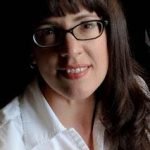 Erica Peirson, ND, is a naturopathic physician and the mother of a 7-year-old son with Mosaic Down Syndrome who experienced undiagnosed hypothyroidism as an infant. She is dedicated to helping other children avoid this potentially devastating start in life. She sees patients privately at the Peirson Center for Children, and is the executive director of Down Syndrome OPTIONs. She writes and lectures whenever possible to help spread awareness to parents and physicians that the symptoms of Down syndrome are treatable through proper treatment and detection of hypothyroidism, among other things. Her knowledge gained working with these children has aided her in helping other children with special needs, including those with autism. 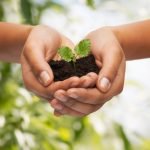 Preparing for Pregnancy Self Care and Epigenetic PotentialEndocrinology, Fertility 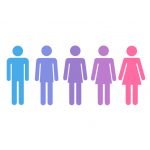