A Case of Parasites?

RN is a slender woman with dark hair and a pale complexion. On meeting her, the impressions were that she was warm, thoughtful and reserved. She is, as well, an excellent observer as can be seen from the following discussion. This initial case was taken towards the end of November 2008.

For two years she had been having cyclic digestive problems. These problems seemed to appear each month around the 11th or 12th and continue until the 16th. It has been consistent since spending time in Africa. RN had been to Africa for an extended period practicing homeopathy and educating amongst the poor. She felt the problem might have a parasitic origin, but repeated stool exams had been negative.

The digestive problems would start with bloating just below the area of the splenic flexure and involved the descending colon. She said that it felt like a bubble expanding and popping. It would grow, pop and disappear. Pushing on the area via massage and passing gas would ameliorate the symptoms. There would also be a sudden urge to stool, felt mostly in the sides of the lower abdomen.

The stool was not painful, but there would be a forcible ejection. There was lots of it and it was watery with broken fragments and mucus (yellow translucent and stringy). When acute, there may have been more bouts of diarrhea after eating, but the diarrhea did not cause waking at night.

There would be an aggravation in the afternoon at 1 PM or 2 PM. This pattern had been repeatedly noted by RN.

There was some chilliness during an episode.

In the stool there were objects that looked like large pieces of corn. They were much larger than a regular kernel of corn and the color was a pale yellow. Interestingly, the patient does not eat corn as she is quite sensitive to it. She also has a past history of digestive sensitivity to milk.

With the digestive problems there would be a lot of fatigue and generalized heaviness. RN has developed a pale face with dark bluish discoloration around the eyes. The coloration is quite noticeable to those that know her and RN reports that the degree is proportional to the degree of fatigue.

There is a need for RN to eat as soon as she feels hungry because a dizziness and irritability supervene. She must eat something filling like meat or rice (chronic symptom but much worse since onset of this syndrome).

For the past two years RN has been waking with “white stuff “around the mouth. It seems to her like she needs to pry her lips apart in the morning.

There is excruciating pain in the sacroiliac area which keeps her up at night. This pain seems to alternate months. The pain is worse after long sitting, as in studying. There is a history of back pain which responded to Causticum.

More eruptions on the chin and the sides of the neck than usual.

She has a chronically dry, stuffy nose. It’s worse in the winter and worse when drinking beer. “Like a constriction up in the sinuses.”

There is some jerking on falling asleep (chronic symptom).

There is a past medical history of supraventricular tachycardia. This happens occasionally in bouts that last about 30 seconds.

Her menses are regular with little cramping.

For the past three months there has been severe breast tenderness for 15 days prior to menses. This is worse from running and worse lying prone.

Premenstrually RN will get irritable or “vulnerable”. For example, if her partner forgets to buy something then she feels “I do things, why doesn’t he do this for me?”

Her normal personality is a “go- getter” with a desire to achieve.

She likes to take on big challenges.

She likes to stand up for things.

She likes to figure out things on her own.

She might take on too much and have a hard time saying “no.”

I questioned RN as to the origins of her intense desire to work with the impoverished people of Africa.

She stated “I have a desire and need to be a voice for those who cannot stand up for things. I believe in taking action instead of just talking. In India, where I had a bad gastrointestinal infection, I had a few intense experiences shoved in my face. There were street kids, poverty, deformity and people severely malnourished. They would grab my wrist and I might drag them along the street some distance before they would give up. I felt guilty being confronted with their starvation. What was the meaning? No one acts on this. There was sadness regarding the apathy of theirs. It became a second nature, something I just had to do.”

Although this digestive episode which occurred in India was about four years ago, RN made the distinction that there was no recurring pattern of digestive upset involving diarrhea until the spring of ’07, after being in Africa.

Here is a list of the rubrics initially used; 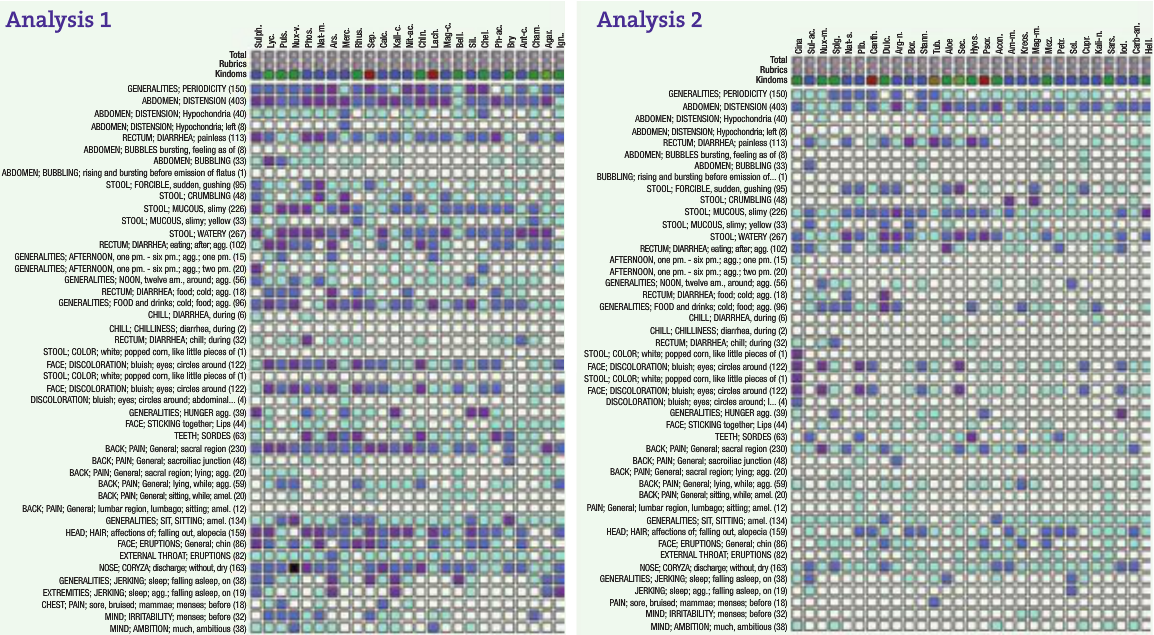 Initially I was a bit overwhelmed at the degree of description and the size of the case. On some reflection however, what struck home was:

I must admit that while taking the case the striking pallor and contrasting discoloration under the eyes brought a remedy to mind. Once I noted the entry under point number 3 above –even though it was not exactly similar to the actual symptom (white popped corn vs. large pale yellow kernel of corn appearance) my mind felt confirmation. See the graph below

Now examine this remedy for the entire case:

Cina does hit the “high notes of this case.”

Cina 200K was used. The effect was rapid with an amelioration of the bowels in a few days. The case is by no means fully cured. The remedy was repeated every 3-4 weeks after a more prolonged response to the first dose (with a recommendation to increase the potency because of a declining interval between doses). Now it has been over 6 months since the beginning of treatment and a pattern is being noticed.

“The very next day after a dose there is an overwhelming nausea/faintness, quite intense, always between 10 AM and 2 PM. If I delay taking the dose I notice an increase in hair falling. My bowels are ten times better and facial color is good. I do notice that if I feel “stomachy”, I am chilled”.

The hypoglycemic symptoms are mostly gone, as is the chilliness. I asked again for a description of the chilliness; It was intense in the hands and the feet. She could not go to sleep without wearing socks, and when it was bad she might as well wear mitts. However, despite the intensity of the coldness, once covered she might quickly warm up and occasionally need to uncover.

A symptom I neglected to note was pointed out. Itching at the internal canthus of the eye. Definitely worse at the right internal canthus. These symptoms recurred at each dose and have been previously noted for Cina.

The back pain is much improved. On retracing the back pain to June 3, 2009, I was corrected in terms of the modalities as seen in the graph above. The back was aggravated after long sitting and twisting as in getting into a car or turning in bed. Also added was the observation that the periodicity of the back pain had grown shorter before the remedy, going from once per 2 months to once per month. The pain also alternated sides of the sacrum. All this was much improved since the remedy and was virtually gone the in the last month or two.

As far as the ingrown toe nails go, despite the long standing of this tendency, she feels it may have worsened since the bowel problem. Interestingly, on repeating the remedy there was an experience of pressing pain in toe as if a nail was in-growing.

As I recall, it was at the first follow-up some months ago that RN let me know that she had made a startling association. When she was traveling in Africa there was a threat of malaria and the recommendation to take anti-malarial drugs as preventive. Looking for a natural alternative she came upon one used for some time and took it regularly. It seems this one is quite popular right now. RN was using regular doses of Artemisinin, an extract derived from Artemisia Annua (sweet wormwood). This plant has been used since ancient times for malaria and is recently being utilized in the treatment of resistant malaria in developing countries. Of course Cina is an Artemisia. Has all this been an involuntary proving? If so, the symptom similarities are interesting. It seems the provings of the two species of Artemesia may be very close.

This raises questions regarding the use of botanicals in a generic manner for the elevation of an immune response. Homeopathy tells us that the individualized chronic remedy is the most appropriate to elevate the body’s resistance to illness, and the genius epidemicus is useful in epidemic disease. In both cases, the emphasis is on individualization of medicinal treatment and, of course, optimization of hygiene.

If indeed Artemisia Annua is a useful preventive/treatment for malaria, might we be wiser to use it in potency – and, perhaps, even to do a full proving in order to discover its precise indicators?

It seems we were treating RN for an involuntary proving of the extract of Artemisia Annua.

She has responded well to Cina in doses from 200K to 10M.

Some symptoms have been removed or very much improved. Others seem to reliably repeat after taking a dose. We should consider the addition of these symptoms to the repertory, especially the emphatic repetition of the time modality present in both the syndrome and the aggravation following the dose.

Joe Kellerstein, DC, ND graduated as a chiropractor in 1980 and as an ND in 1984. He graduated with a spe-cialty in homeopathy from the Canadian Academy for Homeopathy, and subse-quently lectured there for two years. He also lectured in homeopathy for several years at CCNM; for eight years at the Toronto School of Homeopathic Medicine; and for two years at the British Institute for Homeopathy. Dr. Kellerstein’s mission is the exploration of natural medicine in a holistic context, especially homeopathy and facilitating the experience of healing in clients. 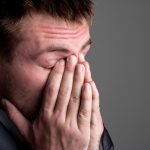 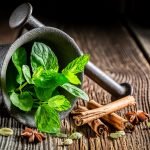