Acne vulgaris is a multifactorial condition that can be very distressing for acute and chronic sufferers alike. Although modern science has yet to pinpoint its exact mechanism and optimal treatment, there are some clues that can help patients break free from the cycle of flare-ups.

There are 4 primary steps contributing to acne lesions1:

Follicular hyperkeratinization leads to non-inflammatory comedone formation. It occurs when cells and secretions that are normally shed from the pore adhere together and are not pushed out to the skin’s surface. In open comedones, this blockage is exposed to air and oxidizes to appear darker (“blackheads”), whereas closed comedones are protected from oxidation below the skin (“whiteheads”).2 Comedones are the building blocks of acne, but some individuals can have persistent comedones and rarely develop acne, while others develop an active acne lesion with each new blockage. Once the duct has been blocked, Propionibacterium acnes (a commensal skin bacterium) has available a decadent food source that enables it to proliferate, leading to an immune response and inflammation. This can result in any of the following:

Without follicular hyperkeratinization, the secretions would pass through the pore to the surface unhindered, the commensal bacteria would not over-proliferate, and inflammation would not occur.

To lubricate and waterproof the skin and hair, mammals secrete a lipid-rich fluid via the sebaceous glands called sebum. It also acts as a transportation medium to get pheromones, toxins, and other molecules to the skin surface. Sebum is composed of a combination of triglycerides, wax esters, squalene, free fatty acids, cholesterol, cholesterol esters, and diglycerides.4 Individuals prone to acne breakouts have been shown to secrete a greater quantity, as well as a different quality, of sebum.

In a pilot study of teenage males, acne sufferers had a greater sebum secretion rate (at 2.51 mg/10 cm2/3 hr), than controls (0.81 mg/10 cm2/3 hr).5 Another study demonstrated that patients with active acne had a 59% increased rate of sebum production,4 with a reduced proportion of free fatty acids and a 2.2-fold higher amount of squalene. Recent research reports that peroxidated squalene induces the production of inflammatory mediators in keratinocytes, indicating that these 2 steps in acne formation (altered sebum production and inflammation) are perhaps not sequential, but more so in tandem.4

Vora et al6 attribute the increase in sebum production of acne-affected individuals to an increased concentration of sebum insulin-like growth factor-1 (IGF-1). They found that “non-inflammatory comedone acne did not correlate with the sebum amount in the T zone or the U zone,” and proposed that increased sebum does not cause the comedo but affects the subsequent inflammation. As we’ll see below, IGF-1 levels are affected by food choices and, in particular, dietary intake of casein and high-glycemic index foods. In addition, though IGF-1 is secreted throughout one’s lifespan, levels are highest during the pubertal growth spurt, thus contributing to the notorious trend of teenage breakouts.7 As demonstrated in other research, Kaymak et al8 found that acne-affected individuals had higher levels of IGF-1, and levels of IGF-binding protein-3 were significantly lower than in unaffected individuals. They also found that participants with acne of more than 2 years’ duration ate a diet with a significantly higher glycemic index than did participants with acne of less than 2 years’ duration, confirming the powerful role of diet on acne, via IGF-1.9

Though altered sebum production appears to be a solid starting point for the naturopathic treatment of acne vulgaris, it is not the whole story. Sebum production is greatest in the T-zone of the face (forehead, nose and chin), but some individuals express more acne lesions in the U-zone (both cheeks).10

Propionibacterium acnes is one of our natural commensal bacteria of the skin surface and pore, and is identifiable in 68% of 1-day-old acne lesions and 79% of 3-day-old lesions.11 When applied topically to unaffected skin, P acnes results in pustule formation, and when injected into keratinous cysts causes significant inflammation and rupture.11

Targeting these commensal bacteria, oral antibiotics have been the primary conventional treatment for acne for many years.1 However, their antibacterial influence is not their primary effective mechanism of action; rather, they act largely through anti-inflammatory routes.12

Plain yogurt application to acne-affected areas leads to short-term reduction in inflammation. Though results may be due to bioflora balancing, it is more likely due to the hydrotherapeutic benefit of a cooling mask to reduce redness and inflammation.

Until recently, it has been accepted that inflammation occurs later in the development of active acne vulgaris lesions. Recent research is suggesting that inflammation is an inherent component of everything from microcomodo formation, onwards,11 encouraging the abandonment of the term “non-inflammatory comodones.”

Other factors to consider are the roles of liver health, hormonal balance and, of course, stress. 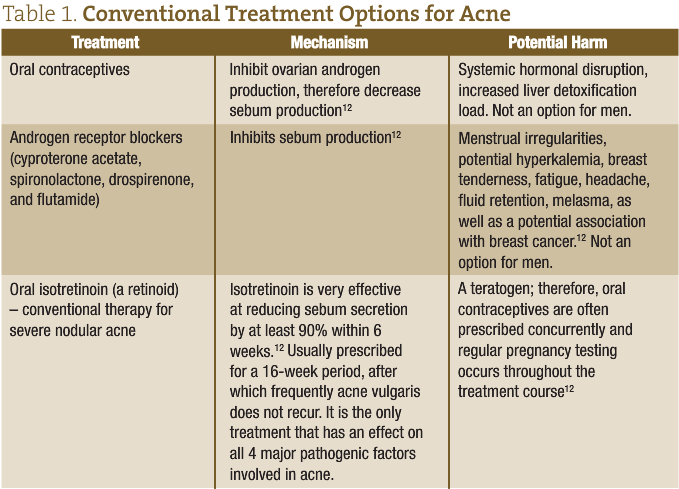 Population-based studies suggest that acne prevalence is lower in rural societies than in industrialized populations, and that acne incidence increases as these groups adopt a western diet.15 More specifically, studies have shown an association between bovine dairy intake and acne vulgaris,16 as well as between acne duration and high-glycemic index foods. Evidence is indicating that these 2 food categories may have a similar role in the etiology of acne: “Milk consumption results in a significant increase in insulin and IGF-1 serum levels comparable with high-glycemic food.”17 Inversely, it has been demonstrated that low-glycemic index diets are associated with reduced risk of acne lesions.8

Dairy may impact acne via hormone modulation. Researchers have suggested that the hormones in milk, such as IGF-1, 5α-reduced steroids, and α-lactalbumin, may survive milk processing and affect the pilosebaceous unit.18 Not only is IGF-1 consumed in dairy directly, but its production in the liver is also stimulated by consuming dairy.19 In terms of the androgenic influence on acne development, 5α-pregnanedione, present in milk, is a precursor of dihydrotestosterone.19 Furthermore, the increase in IGF-1 production due to dairy consumption has also been associated with ovarian androgen production in premenarchal girls, and acne in adult women.20, 21

Equilibration of omega-3 to omega-6 intake helps to curb a systemic propensity for inflammation.23 Supplementation with omega-3 fats helps to bring us closer to our ancestral dietary ratio of 1 omega-3 for every 1 to 2 omega-6, despite the consumption of a typical western dietary ratio of at least 1:15.23 Not only have omega-6 fats been associated with inflammatory acne, omega-3s may reduce acne by limiting IGF-1 as well as decreasing hyperkeratinization of sebaceous follicles.2

Elimination of any triggers that would increase systemic inflammation is vital, including food and environmental allergens. 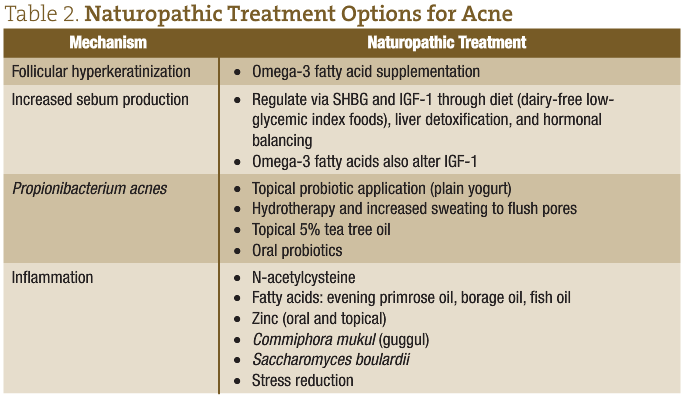 It would be impossible to completely prevent the blockage of every pore in the body, but there are ways to improve clearance of debris from the pilosebaceous unit. Sweating is a one such means of cleaning the pores from the inside out. Researchers have suggested that “reduced water loss from the facial surface, which protects the skin surface from certain bacteria or fungi and delivers vitamin E, might be involved [in the development of acne vulgaris].”24 A small degree of sweating creates a moist environment for bacterial accumulation, whereas profuse sweating, such as occurs in a sauna or “hot yoga” class, significantly flushes the pores to reduce acne incidence.

Dehydration can contribute to clogged pores as oils harden in a dry environment. Being well hydrated will also allow for more toxin excretion via the kidneys, thereby taking detoxification pressure off of the skin. Furthermore, ensure all elimination routes are operating at peak capacity for the same reason.

Topical: Avoid Anything, If Possible

Though sebum secretion is high on the face, chest and back, it’s the face that is most affected. Acne sufferers are often caught in a cycle of washing with a drying cleanser, consequently having to moisturize, with the moisturizer then encouraging the adherence of particulates and the blockage of pores; this, in turn, leads to more breakouts, more drying cleanser, more moisturizer, so on and so forth. For women, this is compounded by the application of make-up that is also frequently pore-clogging. Asking patients to consider engaging in more frequent “face holidays,” such as no make-up on weekends or only washing their faces at the end of the day, may reduce irritation and help to break the cycle.

Conventional treatment of acne vulgaris is often not based on solid scientific evidence, and these interventions are potentially harmful to the patient (Table 1).25 Thus, it is particularly important that we offer our patients safe and effective natural alternatives with permanent resolution (Table 2). As comedone formation typically occurs over the course of 2–3 weeks, it’s important to give your treatment plan at least a month before follow-up. 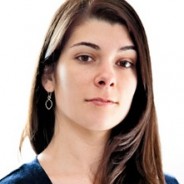 Sarah Goulding, ND is a graduate of the Canadian College of Naturopathic Medicine, and the owner of Nickel Ridge Natural Health, an integrative health centre in Sudbury, Ontario. Dr Goulding has a focus in women’s health and is an adamant proponent of resolution of disease via diet and exercise. She also believes that naturopathic doctors should walk the walk and lead by example. Website: www.nickelridge.ca 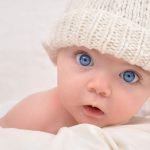 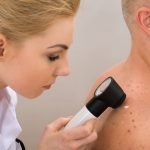 The Skin As a Window: How Skin Conditions Provide Clues to Internal HealthDermatology, Naturopathic News