Viscum album as Treatment for Cancer

Mistletoe has been used as a medicinal plant since ancient times. Rudolf Steiner first recommended its use for cancer treatment in the early 1920s. In the meantime, the use of mistletoe has increased enormously. In the 1970s it was further developed by the non-profit Association for Leukemia and Cancer Therapy to improve its therapeutic success. Nowadays many cancer patients worldwide use mistletoe in some form, mostly in conjunction with other methods such as radiation, chemotherapy or surgery. In Europe, mistletoe is often a key component of conventional cancer therapy.

Mistletoes are semi-parasitic plants that grow on trees, bushes and other plants. They draw water and mineral salts from their hosts, but also carry out photosynthesis and produce carbohydrates that are full of energy. Several hundred mistletoe species exist worldwide, but the European Mistletoe is used medicinally for cancer therapy. Although four species of mistletoe grow in Europe, only the white-berried ones, Viscum album, are used for cancer treatment. They are harvested from several deciduous hardwood trees (oak, apple and elm), and from coniferous softwood trees (pine and fir). The apple- and pine-grown mistletoe are most common, and come from France; the fir-grown mistletoe originates in Switzerland (Gorter, 1998; Hunter, 2002).

Mistletoe contains, among other constituents, two groups of toxins: viscotoxins and lectins. The molecular and pharmacological actions of viscotoxins are closely related to those of snake venom. They have cytolytic action. The lectins are related to castor-oil plant lectins. The mistletoe lectins have cytostatic properties; thus, the toxins both cause cell lyses and also inhibit the growth of cancer cells (Gorter, 1998; Hunter, 2002).

The biological activity of mistletoe extracts can be demonstrated in a test tube; the cells multiply in a nutrient solution. Growth of a human leukemia cell line (Molt H) in a cell culture is stopped by mistletoe extract. Cytostasis occurs because the extract prevents intracellular protein synthesis and cell division. Microscopic examination shows a marked reduction of cell numbers. Animal sarcoma cells (Yoshida) are destroyed by mistletoe extract activity on the cell membrane, and cause cytolysis. Microscopic examination shows that the cells are dead (Gorter, 1998; Hunter, 2002).

There are two main producers of Viscum album extracts for cancer therapy in Germany, each of whom prepare the extract in a slightly different fashion, and one of which is of a higher concentration. I have used both – often on the same patients – and I believe that using a higher-concentration extract stimulates the immune system more effectively and achieves better results.

One great benefit of using mistletoe extracts for cancer therapy is that it is completely complementary. Mistletoe injection therapy does not interfere with the effects of chemotherapy or radiation. By producing immunomodulatory effects as part of the therapy, use of mistletoe allows the patient to proceed with a faster regimen and with minimized side effects, reducing adverse effects from chemotherapy and radiotherapy. Reducing the risk of recurrences and metastases is also a significant factor in choosing mistletoe therapy. 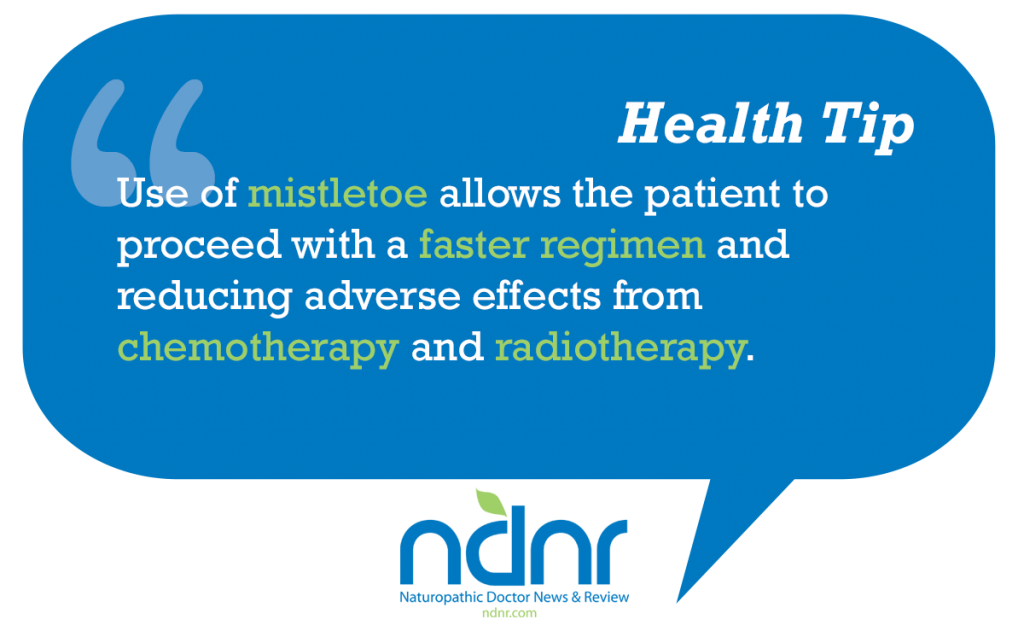 In November 2003, a 65-year-old female (EFK) was looking for someone to provide mistletoe injections. She researched it herself, being of European origin and familiar with complementary medicine.

On taking her case history, it became evident that at the time of her first visit with me she had already undergone radical mastectomy of her left breast, with transverse rectus abdominis myocutaneous (TRAM) flap being done following breast removal. Her tumor was estrogen positive and she had a history of being on HRT for 15 years, hypertension, hypercholesterolemia and smoking. A pathology report showed extensive lymph node involvement, with five lymph nodes being positive on excision. She was given two years to live, and it was recommended she receive both chemotherapy and radiation. She was told her recurrence rate would be 75%.

EFK refused chemotherapy, but received 25 radiation treatments in the usual manner, with minimal side effects.

As of this first office visit, EFK had finished her radiation treatments and was taking daily doses of tamoxifen. She also took anti-hypertensive medications, atorvastatin and alendronate, and continued to smoke.

After initial assessment and testing, including Biological Terrain Assessment (BTA), she was put on the detoxification regimen involving kidney, liver and lymphatic drainage using homotoxicology preparations. Her CBC showed a low platelet count and high total cholesterol; it was otherwise unremarkable.

EFK finished the detox program and was resistant to doing more: Her only interest was in starting injections of Viscum album. I started her on the lowest recommended dose to prevent possible allergic reactions. She began to receive two to three subcutaneous injections in the abdominal area weekly. Starting injection dose was 1mg concentrate in a 1ml injectable ampoule. We slowly built up concentrations, and she did not show any reaction until 20mg concentrate was used.

The regimen is seven injections over two weeks, followed by two weeks without injections.

EFK remained on the same regimen of 7-20mg injections followed by two weeks of rest. The resting period is required in order to prevent hypersensitivity from setting in.

EFK continued her regular injections of Viscum album, but she had stopped reacting to the preparation in the usual manner: The preparations seemed to be too weak to stimulate a reaction, and a higher dose was not available from the manufacturer. I suggested we switch the brand to provide the flexibility of a higher concentration if needed. EFK reluctantly agreed. We again began with the lowest dose and slowly built up the concentration, following the same regimen of seven subcutaneous injections over two weeks, followed by two weeks of rest.

EFK tolerated the therapy very well and showed the necessary commitment to continue the weekly regimen. Her oncologist switched her from tamoxifen to exemestane. She also agreed to stop taking atorvastatin and switched to a natural plant extract to control cholesterolemia. Her yearly check-ups for evidence of recurring disease continued to be negative.

EFK again had stopped showing any kind of a reaction to the injections, so we increased her dose per injection to start at 50mg for the first two injections, then 70mg, 80mg and finally two shots of 100mg, followed by two weeks of rest.

On this new regimen, EFK was showing mild but steady reactions to her injections.

Even though the literature suggests that frequency of treatment may be lowered after three years of remission, EFK wanted to continue as-is until her five-year anniversary in 2008.

EFK’s treatment schedule has continued without change. EFK has improved her diet, and is taking a balanced multivitamin supplement and bone formula. She (unfortunately) continues to smoke. Injections of mistletoe have improved her immune system overall, as she reports much lower frequency of colds and flu. 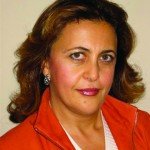 Elena Krasnov, ND graduated from CCNM after receiving a degree in medical microbiology and a specialist in medical genetics from the University of Toronto. Elena received special training in chelation therapy and homotoxicology, and is recognized for her expertise in treating stress and fatigue-related conditions, women’s issues and children’s ailments. She also has a special interest in designing effective cancer support and prevention programs. She established her practice at the Toronto Naturopathic Clinic more than 15 years ago. TNC is a comprehensive multidisciplinary clinic where she treats everyone from infancy to old age with an emphasis on restoring balance to the body and allowing healing to proceed. Elena has her own column called The Healthy Way in 24 Hours Magazine and has been featured on many television and radio stations.

Mistletoe therapy with Helixor – a sensible adjuvant in the treatment of your cancer patients. Literature off-print by manufacturer. 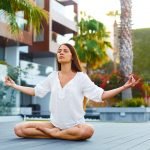