RM, a 55-year-old female, complained of right-sided muscle pain and joint stiffness of the neck, shoulder and elbow. Her main goal was to regain shoulder use (mobility and strength), as she is a potter. While potting, she sits 20 inches off the floor, hunched over 10 pounds of clay while molding. She typically works three to five hours a day 4-6 times a week. She reported no history of MVA, surgery or traumas.

Onset of symptoms in January 2006, at which time she had visited an MD. After five months of treatment (muscle relaxants), her symptoms did not improve. When she came to the clinic, her symptoms included less than 90 degrees right-side shoulder abduction and inability to internally rotate on the right. In addition, her right shoulder was significantly weaker than the left. Pain was shooting toward the right temple and felt “like a knot” in her neck. At this initial visit, RM described her overall shoulder health as 3/10 (10 being optimal) and a pain intensity of 6/10 (10 worst pain ever). Her goal upon visiting us was to reduce pain and regain mobility so that she could continue to do her pottery.

Active Range of Motion (AROM) and palpation assessments were done over a four-week period (see Tables 1 and 2). Treatment began on June 8, 2006. 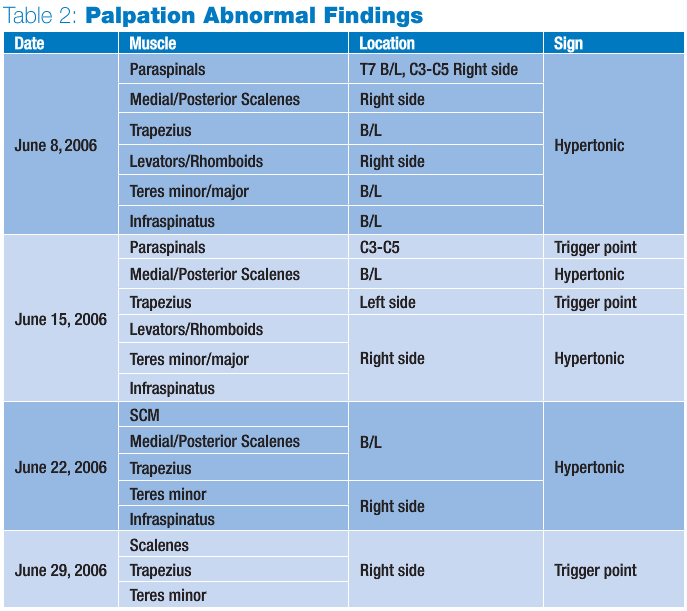 Table 1 shows that that RM rapidly regains ROM on her right side during the treatment period. Over time, as shown in Table 2, fewer muscle groups show abnormal hypertonicity or trigger points.

We see significant improvement over the treatment period and beyond. After June 29, 2006, RM was only interested in receiving naturopathic bodywork.

Treatment included acupuncture threading techniques corresponding to the muscle groups, which demonstrated hypertonic/trigger as outlined in Table 2. This technique involves the insertion of acupuncture needles directly into muscle bellies that have become shortened, often referred to as a knot, or shortened or hypertonic muscle. The acupuncture needle allows the hypertonic muscle to release and go back to the normal relaxed state. As a result, the patient often feels a spasm as needle is inserted and the muscle releases. In the meantime, the clinician – who maintains an immobilizing grip to the affected muscle – will feel the muscle “melt” to the feeling of putty from that of a hard knot. The patient often feels tired in the muscle area of treatment. However, he or she will also feel more relaxed or loose, with increased mobility and decreased pain. Normally, the patient will not feel any additional pain from the needle insertion.

Additionally on June 3, 2006 the following treatments were given: Fish oil (2400mg of EPA/day) to decrease inflammation, water intake 2L/day (up from 750ml/day) for proper muscular hydration. On June 8, after the initial treatment, right shoulder exercises were prescribed to retain ROM gains from acupuncture treatment. Exercises included pendulum figure-8 motions over chair and arm abductions. RM was instructed to push to mild discomfort limits 3x/day with 20 repetitions.

RM was very surprised and pleased after the first week of treatment, bordering on disbelief. This was understandable, since previous treatments by the MD were unsuccessful for nearly five months prior. Still, it would have been interesting to see the results from a fully compliant patient. After June 29, RM opted to move to naturopathic bodywork despite recommendations to continue on the current treatment protocol with a greater emphasis on ROM exercises for the shoulder.

The acupuncture threading technique was responsible for initiating the healing process by releasing the muscles. This allowed increased blood flow to the area to bring nutrients and oxygen while transporting toxins away. The adjunct therapy aided to excel the healing process. The fish oil acted to rebalance the normal inflammation process by clearing the chronic state. With proper hydration, the affected muscles were able to remove toxins and resume normal physiological processes. The exercise regimes were designed to gently maintain the ROM gains from the treatment, preventing the muscles from returning to a hypertonic state, and to promote the affected muscles back to normal function.

It should be noted that RM was not completely compliant with the treatment protocol. Water intake never exceeded 1.5L/d and exercises were done 2x/d with one to two days missed per week. She continued to work on pottery despite recommendations to stop in order rest the shoulder during treatment. Often, she would work for four to six hours up to two times per week during this period.

Aubrey Rickford, ND is clinical supervisor for the Robert Schad Naturopathic Clinic and head of the Sports and Pain Clinic at CCNM. In addition, Rickford is an ND for Husky Injection Molding Systems. He has a private practice in Bolton, Ont., and is serving as a first-year Asian medicine associate professor at CCNM.

Derek Cook, fourth year at CCNM, is scheduled to graduate in May. He obtained a double major Honours degree in biology and chemistry at Wilfrid Laurier University from 1994 to 1998. As a co-op student while at Wilfrid Laurier, he worked in the geochemistry lab of the earth sciences department at the University of Waterloo, isolating nitrogen, oxygen and carbon isotopes from watersheds for environmental studies. He also worked with Pioneer Hi-Bred, a canola research station. Working in the research and development department as a molecular biologist, he helped isolate and modify genetic material in order to improve genetic lines for canola crops. He pursued a career with Accucaps, a subsidiary company of Apotex Pharmaceuticals as a product develop chemist. In 2003 he commenced his studies at CCNM. 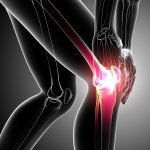 Regenerative Injection Therapy of the Knee: Case No. 2Pain Medicine 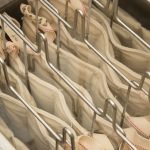