I Don’t Get Sick: An Advanced look at a 39-year old Patient with non-Hodkins lymphoma

Sarah is a sharp, spirited soul with piercing eyes. She is friendly but with definite overtones of “do not mess with me.”

Sarah was consulting me for the second time in April 1999, at the age of 39 years. The first time was some 15 years previously, when she came to have her eczema treated.

Her medical history includes tonsillitis, strep throat, allergies, cold sores, gallstones, and a miscarriage. There is a history of sexual abuse. Both of her parents had cancer, as does a sister (breast cancer). Three weeks previously, Sarah had been diagnosed as having advanced non-Hodgkin lymphoma.

She stated emphatically: “I don’t get sick. I go arrogantly through life, except for my low back pain.”

One month previously, Sarah had come down with a horrid chest infection and cough. Her lungs seemed to fill up. Antibiotics did not help.

A week later, there was a considerable amount of blood found in her urine. She was referred to a specialist because of an abnormal result of both elevated glucose and white blood cells in the urine. The oncologist discovered swelling of mediastinal and inguinal lymph nodes.

Last week, there came the news that chemotherapy was needed. The physician was surprised at how advanced the situation was. It was non-Hodgkin lymphoma and quite aggressive. Sarah had been very tired the past 4 to 6 months. She felt a pressing need for a daily nap at about 1:30 pm.

She stated: “I’m afraid. I have kids. If I have only a limited time, I don’t want to be ill. The last 6 weeks, it was getting easy to forget things. Since January, there has been a ‘low ache’ in the liver, together with clamminess. There is also a pain in the abdomen low down that acts up when I lie down.”

Recently, she had had bouts of cold sores appearing on the left outside corner of her mouth. One year ago, there had been a hideous huge cold sore, which bled on the right wing of the nose.

Her menses for the past 4 months had been very clotted. The clots were dark and the size of walnuts.

She had had 2 or 3 bouts of eczema each year, lasting about 6 weeks. It always began on the left hand between the last 2 fingers. Sulphur 30C greatly improved this.

Arthritis affects her ankles, hands, and lower back.

The lower back pain has been worse than usual the past 2 months. The last computed tomographic imaging 2 years ago showed degenerative disc disease. Since 1996, she had not had a day without low back pain.

When it is bad, the lumbar pain can extend to the anterior thighs.

The back pain is when worse she is rising from a seat. Sarah feels a need to stand and move. The back emits a kind of fever or heat in the area of the pain. There is heat in the lower back when she is tired.

It is worse when she is driving a standard transmission or getting out of bed. Lying on the left side seems to be the most comfortable position. Ascending stairs, bending, and carrying weights are difficult. The back pain is also worse during the flow of menses. There is some pain in the hands from osteoarthritis, which is worse in cold water. Cold air will also aggravate it, and Sarah will wear gloves in October. The ankles are the same and are stiff in the morning. It is as if they have seized overnight. In the house, she will never wear socks or shoes; at night, she will always uncover her feet, although initially she might wear socks to bed.

She described her emotional state and relationships: “In terms of mood, it seems the tolerance level is short. Why can’t they get it right? I cannot do as much as I could. I am very organized. Right now, it feels like pigs live in this house. I have a high standard. I like things organized, planned, and I like cleanliness. For 2 months, I have been fighting with my friend-partner. He moved out. I was very angry. He has an exwife and 2 kids. He doesn’t know how not to let others walk over him. For the past year, I felt there has not been the level of commitment that is appropriate. I am fifth or sixth in the levels of priority. I have worked hard to get past the history of abuse. I am being treated less than I deserve. I have very clear ideas on what this relationship should hold. I have not let him back in the house.”

Sarah has had gallstones for 2 years. She has had several serious gallbladder attacks.

Sarah has always been someone who is too warm. She has always loved the winter and detests the summer. However, she has felt colder during the past month.She has no tolerance to the heat of the sun and cannot stand a beach. She says that it is oppressive and that there is no escape at all.

Sleep
Sarah described how sleep is hard to come by:“I can get restless and prowl around the house. I seem full of unresolved issues regarding my stance on them. I am sleepless until 12:30, and twice a week I will wake at about 3 am. My mother died when I was 2 years old. Occasionally, stories come to life in dreams. Twice a week, I dream of my mother.”

Appetite
Sarah’s appetite includes cravings for chocolate, fish, rare beef, and rich foods like Alfredo sauce.
She has a classic anaphylaxis to mushrooms.

Personality
Sarah has a sharp mind: “I get from A to B quicker than most.”She has definite ideas about issues. She has a drive to know where she stands on issues and is not sure why. She described herself as: “Warm and caring. Fiercely devoted to my God. Intolerant of stupidity and wishy-washy people.”
She continued: “Why do people wander around without belief? Life is a bunch of choices, so make one! I have well-constructed walls. Rarely will anyone see me emotional in public. People see me as strong. I’ve created this facade, and few people see through it. I am a very private person. I lead a life of service. My sister says I got my black-and-white personality from my mother. She was a rebel. I have a quick temper. I like to schedule and plan. I expect everyone at the dinner table, chores done. I hate racism and arrogance. I hate right-to-die people. There is process in dying. You can’t live life without discomfort. Social justice is important. I am in a position of leadership in the parish. I am the peacemaker, the fixer. I am quite prepared to leave this temporal life.” 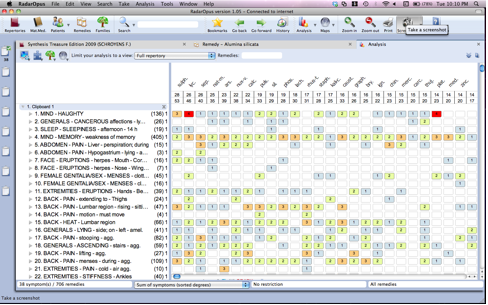 Analysis
In considering the case, we review the features that are most striking and singular. What struck me most was this lady’s mentality, and I struggled with how to define this. When I think of her, the certainty, confidence, or something stands out so. On reflection, I think it is her definite unwavering stance regarding both life and religion. Broadly, this is obstinacy-pertinacity. Following close behind would be her intellect and her intolerance for unfairness. 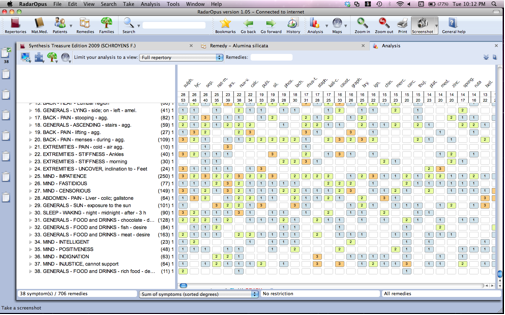 The next notable finding is the lumbar pain, which at its worst extends to the thighs bilaterally. Then follows her 3 am waking time twice a week. Sulphur is clearly indicated. The 30C has worked for years in palliating her eczema. It is time to increase it to 200D.

May 1999
By day 2 after sulphur 200D administration, Sarah woke without any pain. She relapsed on day 3, reporting night sweats with a musty odor. 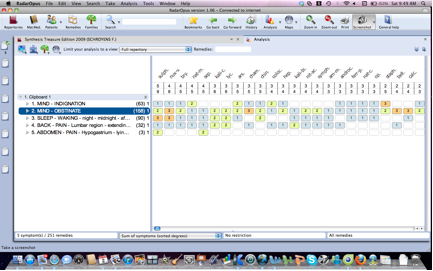 Sarah then redosed the sulphur 200D. This time, the pain abated for 6 days until she developed a 24-hour bug.

The remedy was repeated again when the illness was over. After redosing this time, she developed a rash on her hands as in the beginning of eczema, but it did not develop.Instead, it simply vanished in a day or so, as did the pain.

A follow-up examination with the oncologist in the fall showed a complete absence of the mass! This brings us toher next presentation 6 years later. 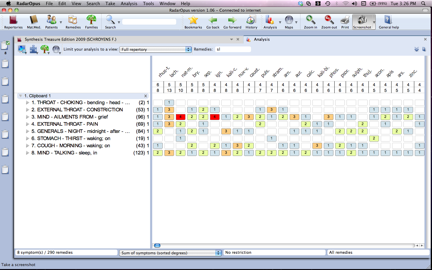 August 2005
Sarah was diagnosed last Thursday as having a follicular cancer of the thyroid. A lump had been noticed 1 year earlier, and records showed that about 18 months previously she had gained 70 lb.

Just prior to the August visit, there had been a deep rift with a child. Sarah was distraught and angry and deeply feels this lack of relationship:
“Every morning when I wake, she is the first thing I think of.” 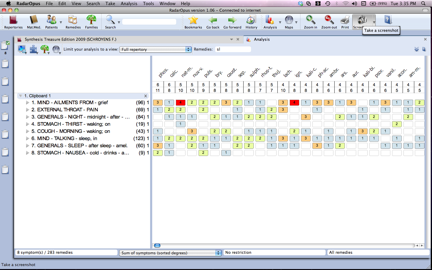 She reports extensive tiredness. There is an aching in the thyroid from about 3:30 to 9 AM each day.

She described the feeling in her neck: “I must sleep with the head extended back or sitting up. Otherwise, I will choke. It always feels as if I am wearing something too tight like a turtleneck.” Sarah has 2 measurable lumps in her thyroid. Their diameters are 4 cm on the left and 8 cm on the right.For the past several months, she wakes at 3 AM, experiencing thirst on 4 of 7 nights.She talks all the time in her sleep, is short tempered, and has a cough on waking.The repertory chart calls for 1 dose of Lachesis mutus 200C.

One Week Later
Sarah reports that her throat seems tighter. The morning cough is more frequent. Her sleep is improved, with no waking or choking. The ache in the thyroid is the same.

A new symptom is disclosed: “What is new is a nausea that washes over me head to foot that seems better after any sleep.” Her nausea is ameliorated by drinking lots of cold water. Otherwise, she feels less irritable but more emotional (weepy). I prescribed Phosphorus 200D (1 pellet administered twice). This was my last instruction before Sarah’s surgery, aside from the usual recommendations for Arnica montana and related remedies before and after surgery. Her surgery was 2 weeks later.

Five Weeks Later
I next met with Sarah 3 weeks after her surgery, with a preceptor in the office (as is usual). I was blown away by the findings. The surgeon had a follow-up visit with Sarah about 1 week after surgery. He said hers was probably one of the largest tumors he had ever seen, weighing well over 1 lb. The very striking news was that it had seemed to have died in situ!

No further treatment was recommended. The surgeon asked Sarah why she had virtually no bruising, while the others in the waiting room looked as if they had just been extensively injured. When she mentioned A montana, the surgeon’s interest seemed to evaporate.

This is an unusual case of a very determined strong-willed person, who much like Jack Palance in the comedy film City Slickers (http://en.wikipedia.org/wiki/City_Slickers) lived for “one thing.” I wonder if that made a difference. 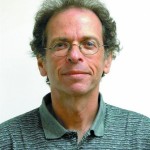 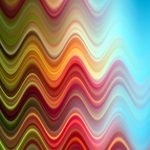 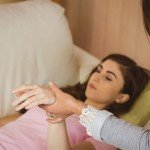 The Role of Hypnotherapy in a Naturopathic PracticeMind/Body