Similar Thought: My Aching Back

Frank is a hard working plumber. He was coming up on 3 months of unbearable back pain when I met him. After 6 weeks of chiropractic therapy and steroid medication, he was really no further ahead. His backache is related to a work related injury: Several months ago, he had been helping to deliver a furnace, and awkward moments during this activity led to his very significant injury and its sequelae.

The pain is left sided, occurring mainly in the buttock and extending down the lateral aspect of the left leg. In order to walk with a degree of ease, he must lean right and forward (antalgic). In fact, it is better if he walks on his toes!

The pain gets so sharp, he feels as if he wants to fall. He experiences is a painful clicking in the sacroiliac joint. To relieve the pain, he must lie on the painful (left) side in the fetal position. In general, the pain is worse on rising from sitting, and he feels “seized up” after long sitting. The pain is worse from coughing and sneezing (as in the Valsalva maneuver) and from turning.

In general, our patient says he is someone who must accomplish. He needs to set goals, and he says, “I must do as much as I can.” Franks says he can’t say no to people who need him.

Frank is an outdoorsman, a hunter, and a generally busy, involved, down-to-earth kind of guy. He loves being outdoors, especially in the cold, fresh weather. “The colder the better,” he says, and this is even more true now that he is in pain! 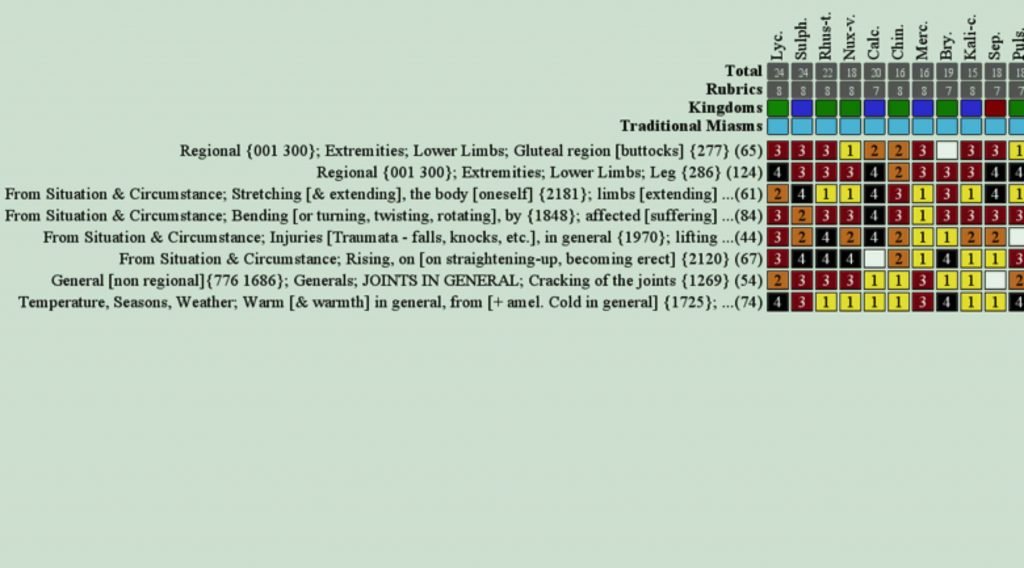 Lycopodium and Sulphur came up strongly in this case (Figure 1).

Notes on Sulphur from Allen’s Encyclopedia of Pure Materia Medica include:

Tensive pain in the left side of the back, on moving the arm.

Pain in the small of the back, when rising from a seat.

Pain in the left side of the small of the back (on the 2nd day).

Pain in the small of the back, so that she could not stand erect; she was obliged to walk bent over.

Sudden violent pain, as from a sprain, in the small of the back, on sneezing, followed by drawing pain close to the spine, extending thence into the left groin and testicles, especially painful on rising from a seat and on walking.

Aching pain in the small of the back, felt especially when sitting down and rising up.

Notes on Lycopodium from the same source include:

Pain in the small of the back, constant, but especially violent when stooping and rising again.

Violent pain in the small of the back; while sitting he cannot sit up straight, but must bend over (after 5 days).

Pressive pain in the small of the back (after 4 days).

Sulphur was far more convincing upon reading the symptoms. So the plan: Sulphur 30C, 2 pellets BID.

Three weeks later, Frank reported, “During that first week taking the remedy, I slowly noticed the leg pain vanish and then the buttock pain seemed to go. Now, I have no sciatic pains at all! I still get stiffness on rising and when I first start moving around, but I feel so much better and my mood is altogether better.”

Frank had just returned from a week of hunting in the bush where he’d had to walk all day in 30 inches of snow without any episodes of pain. He was lucky enough to get a deer, which he loaded on a sled and dragged out of the bush – without repercussion! 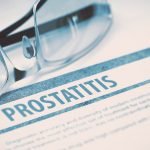 Chronic Prostatitis & Pain: Getting to the Root and Resolving ItMen's Health, Pain Medicine 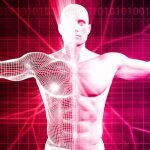