Ibuprofen drugs and aspirin all belong to a class of drugs called nonsteroidal anti-inflammatories, or NSAIDs. As most know, these drugs are regularly used to reduce pain. In fact, according to a 2002 survey, 34% of the US population reported using aspirin or ibuprofen the previous week.1 Even though NSAIDs are effective at reducing pain and inflammation, they also put individuals at increased risk for heart attack, stroke, joint degeneration, intestinal bleeding, kidney disease, and nutritional deficiencies.

In order to understand how NSAIDs are detrimental to various body systems, it helps to have a basic grasp of how inflammation works. The presence of pain is usually a sign of an underlying inflammatory process, and the arachidonic acid pathway is the main mechanism. During acute and chronic inflammation, arachidonic acid is released and shuttled into the cyclooxygenase (COX-1, COX-2) and lipoxygenase (5-LOX) pathways. The purpose of these enzymes is to produce chemical messengers called prostaglandins, thromboxanes, and leukotrienes. These substances are local hormones that act on our immune cells, blood vessels, the gastrointestinal (GI) tract, and lungs. When the arachidonic acid cascade is triggered and the chemical mediators are released, we present with signs of inflammation – pain, swelling, and heat. NSAIDs reduce pain by blocking the cyclooxygenase pathways, thus preventing the production of prostaglandins and thromboxanes. Subsequently, the arachidonic acid that is being produced is shunted to the lipoxygenase pathway (Figure 1).2 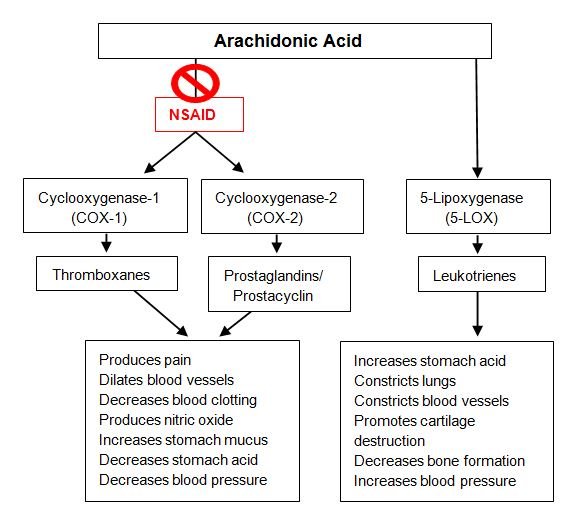 NSAIDs do reduce pain, but what is the cost? The FDA has just strengthened the warning that nonsteroidal anti-inflammatories increase the risk of heart attack and stroke.3 COX-2 is found in the lining of blood vessels, and blocking this enzyme increases blood clotting and raises blood pressure. The absence of COX-2 in the vessels also decreases the production of nitric oxide, a chemical that is protective against cardiovascular disease.2

Many people use these over-the-counter pain relievers to treat joint and muscle pain. Although NSAIDs provide symptomatic relief, they do not address the cause of inflammation. In fact, they can actually make the problem worse. When the cyclooxygenase pathways are blocked, more leukotrienes are produced via the lipoxygenase pathway. Leukotrienes promote the release of chemicals that decrease cartilage synthesis, promote cartilage breakdown, impair the body’s ability to repair damaged cartilage matrix, and inhibit anabolic bone activity.4 Ironically, daily use of NSAIDs to treat degenerative joint disease actually speeds up joint degradation.5

A very common side effect of NSAIDs is gastrointestinal damage. The increased presence of leukotrienes causes increased stomach acid production, reduces gastric blood flow, and increases stomach inflammation.6 These 3 effects create the optimal environment for the development of peptic ulcers, acid reflux, and GI bleeding. In addition, research is showing that NSAIDs actually cause bleeding in the small intestine, specifically the jejunum and ileum.7 In addition to damaging the intestinal lining, NSAIDs appear to alter gut flora8; this can contribute to leaky gut, food intolerances, and suboptimal immune functioning. As a result of damage to the small intestine, it is reasonable to assume that people can develop nutritional deficiencies as 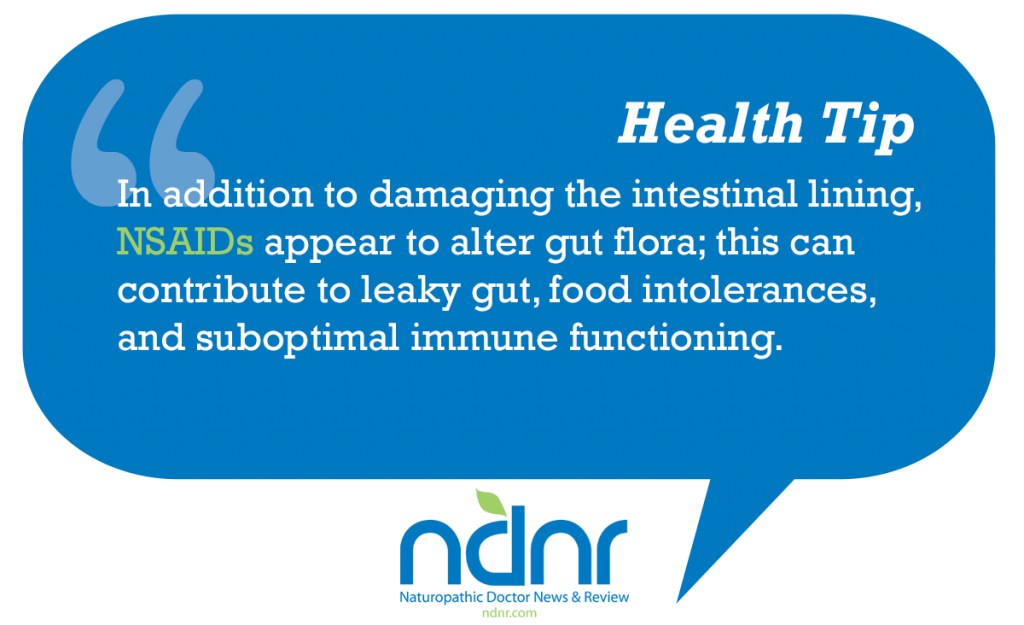 a result of taking NSAIDs – iron and folic acid, in particular.9

Since NSAIDs promote the constriction of blood vessels, the kidney is negatively impacted. The constriction of renal vessels can lead to electrolyte imbalances, hypertension, and edema.10 More importantly, NSAIDs can cause acute and chronic renal failure,10 which is a life-threatening complication.

NSAIDs have a place in our medical system; however, many people take them daily with the thought that they are completely safe. Even though NSAIDs help to reduce symptoms, they are not treating the root cause of pain and they have severe side effects. The presence of pain is a flashing sign of an underlying issue; suppressing the symptom with NSAIDs only makes the situation worse. More conservative use of these drugs will decrease the risk of cardiovascular, gastrointestinal, renal, and musculoskeletal complications.

How Dietary Changes Can Replace NSAIDs

In my experience, the foundation of any pain management treatment plan starts with adopting an anti-inflammatory diet. The first step in creating an individualized diet with a low inflammatory load is determining a patient’s food sensitivities. Identification and elimination of foods that are triggering an immune response can decrease pain dramatically. My gold standard for determining food triggers is an elimination diet. Even though I strongly urge most patients to undergo an elimination diet, for some this is a task they cannot undertake. In such a case, I then turn to serum IgG and IgA food sensitivity testing. Once an individual’s food sensitivities are identified, I have seen most patients thrive on a low-carbohydrate Mediterranean diet that excludes their specific food intolerances. The Mediterranean diet is based on adequate consumption of vegetables, fruits, seeds, nuts, omega-3 fatty acids, and lean meats. This way of eating has been thoroughly researched and proven to help with many inflammatory conditions.

When it comes to pain management correcting the gastrointestinal terrain is just as important as making dietary modifications. If there is increased intestinal permeability, there will be increased immune reactivity. While counseling patients about changing their diet, it is necessary to address an underlying dysbiosis and leaky gut. When looking to affect change in the bacterial populations of the gut, I first rule out pathologic causes of dysbiosis, which include bacterial, yeast, and parasitic infections and/or overgrowth. After these conditions have been ruled out, it’s important to prescribe a high-potency probiotic and make sure the patient is also eating foods high in probiotics and prebiotic fiber. Foods that are great for supporting a healthy balance of flora include kefir, kimchi, sauerkraut, picked vegetables, bone broth, acacia gum, slippery elm, and inulin. In addition to repopulating the gut with “good” bacteria, I also prescribe glutamine, Aloe vera, and deglycyrrhizinated licorice (DGL) to promote healing of the mucosa.

Reducing inflammation in the gut also requires optimizing digestion and absorption. The first step to achieving this is through mindful eating practices. It is not uncommon for most people to eat food when preoccupied or in a sympathetic state. I have found that most patients eat their meals in front of a computer screen, while watching television, driving in the car, etc. The habit of eating while distracted is detrimental to healthy GI functioning because it prevents adequate secretion of digestive enzymes and stomach acid while also promoting bacterial dysbiosis. In order to support the secretion of digestive enzymes, I recommend my patients eat without distractions, and focus on chewing each bite of food 15 times before swallowing; I also prescribe herbal bitters to take before meals.

A 44-year-old male presented to the clinic seeking complementary treatments for chronic pain due to ankylosing spondylosis. The patient complained of severe lower back pain that prevented him from being active with his children. His rheumatologist had prescribed the NSAID, meloxicam, and he’d been taking 15 mg daily for the past 3 years. In addition to the NSAID, he was prescribed omeprazole prophylactically. Even though he was diligent with his prescription medications, he reported no improvement in pain severity or frequency.

After analyzing the labs he brought to the clinic, I immediately prescribed 5000 IU of vitamin D daily to correct his deficiency. I then prescribed a 3-week elimination diet and added a probiotic, acacia fiber powder, glutamine powder, and an adrenal support supplement.

The patient was close to 100% compliant for the entire 3 weeks, and on his follow-up appointment reported a 70% improvement in pain. Not only was his pain level decreased, he was able to bike-ride and play with his children again. At the time, he was still having mild flares of pain, so I recommended an herbal anti-inflammatory supplement, which helped to control the pain in acute circumstances.

The patient’s commitment to making the dietary changes was integral to his symptom improvement. He has maintained an anti-inflammatory diet and continues to have improved pain levels, better quality sleep, less anxiety, and weight loss. 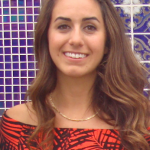 Shannon Estrada, ND, is a licensed naturopathic physician who graduated from Bastyr University in 2014. Before studying naturopathic medicine, she graduated from UC Berkeley with an undergraduate degree in Integrative Biology. Dr Estrada is currently practicing as a primary care provider within a multidisciplinary clinic in Seattle called Graham Rehabilitation and Wellness.  In addition to providing individualized treatments, she is passionate about empowering her patients through collaboration and education. When not seeing patients, Dr Estrada enjoys cooking, Pilates, and traveling. 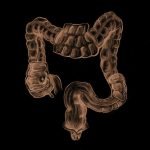 The IBS Within the IBDGastrointestinal 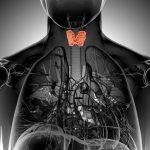